The developer of a 12-story condo and hotel project at 950-975 Market Street between 5th and 6th Streets (next to the Warfield theater) is in contract to pay $4 million for a surface parking lot two blocks down at 180 Jones Street. The Chronicle reports that Group I, the developer who has gone to great lengths to appease local interests, plans to donate the land along with $14.8 million in fees, $12.8 million of them required by city regulations, to San Francisco for affordable housing.

Group I's plan is for large, mixed-use development at 950-985 Market and comprises 250 residential units, 232 hotel rooms, ground-floor retail space, and room for the Magic Theatre Company, headquartered at Fort Mason, to expand. The strangely shaped site includes half a block along Market, then twists through the block's center onto Turk Street. The condos are bound for Market Street and the hotel would be at the corner of Turk and Taylor Street near a 2,000-square-foot plaza on Turk.

The land dedication of 180 Jones to the Mayor's Office of Housing will be heard before the Planning Commission on November 3. To complete the development of the lot, the city would have to provide another $2 million. 180 Jones could likely fit 68 studio apartments, half of which would be aimed at those earning $30,000 or less, or 40 percent of the area median income of $75,000. The other half of the units would be for those earning $45,000, or 60 percent of that median income. This is all instead of Group I's original plan to designate 37 of its 242 condos to individuals making $60,000 or 80 percent of area median income, which caused Tenderloin affordable housing advocates to balk. The area's Supervisor, Jane Kim, considers the Jones Street project "step-up housing" for those currently in residential hotels. 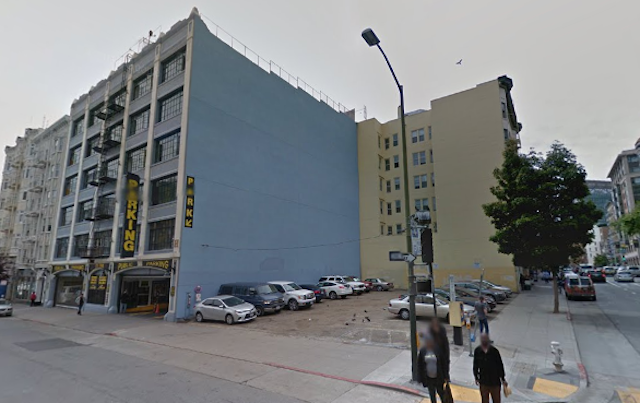 An LGBT group called the Q Foundation, led by Brian Basinger as an extension of the AIDS Housing Alliance, was the latest to contest Group I's development with a Preliminary Mitigated Negative Declaration that the Planning commission must consider in its hearing on October 27. Basinger cites several long-gone gay bars in the vicinity, such as the Old Crow, which is now a Metro PCS store, as reason to halt the bulldozing of the area and preserve it instead as an LGBT historic district. He also appears to be demanding that the 2,5000-square-foot space committed to Magic Theatre for an education center, theater, and cafe, be given instead to an LGBT business such as one proposed by the popular drag queen, chef, and organizer Juanita MORE! and inspired by Gene Compton's Cafeteria, which at 101 Taylor Street was the site of a historic LGBT uprising.

180 Jones, at the corner of Jones and Turk. Photo: via Google street view

As residents of San Francisco battle it out over various proposals to address homelessness and a dearth of affordable housing in the city, our neighbors to the south are engaged in a debate

Guests at a San Francisco fast food joint were stunned Sunday, when a man entered the restaurant and started stabbing a patron. According to the San Francisco Police Department, the 36-year-old victim was