The story goes that the mansion of Sarah Winchester, heir to the rifle family's fortune, was constantly under construction in order to create more space for her to quite literally outrun her demons. In an era in which seances were all the rage and the occult was particularly enticing, Sarah, a widow, saw a psychic who claimed to be channelling her late husband, informing her that she was being haunted by dangerous ghosts of people killed by, you guessed it, Winchester rifles.

That's why the mansion is so full of winding staircases, crawl spaces, and other nooks and crannies in which to run and hide from unseen tormenters, including a previously unexplored attic space recently excavated by the home’s preservation team. It's here that Sarah reportedly secluded herself after the 1906 earthquake, which she interpreted not as a geological event, but as the literal bump of spirits in the night.

Now the home, which is listed in the National Archives of Historic Places, is San Jose's largest tourist attraction, known as the Winchester Mystery House. Its many rooms (including the attic, there are 161) are arranged to spooky effect, with tour guides playing off the popular ghost narrative. That's particularly true around Halloween, when there are flashlight tours etc.

If it hasn't been so this whole time, it does sound like the Winchester Mystery House is getting a bit Disney-fied, and it's about to receive the film treatment to boot, which certainly won't help in that regard. An adaptation of the story is being pursued by the Australian directors the Spierig brothers, with Helen Mirren attached as Sarah, and the angle for the flick sounds to be a sort of horror genre take, one playing with the idea that Sarah's ghosts might be real. 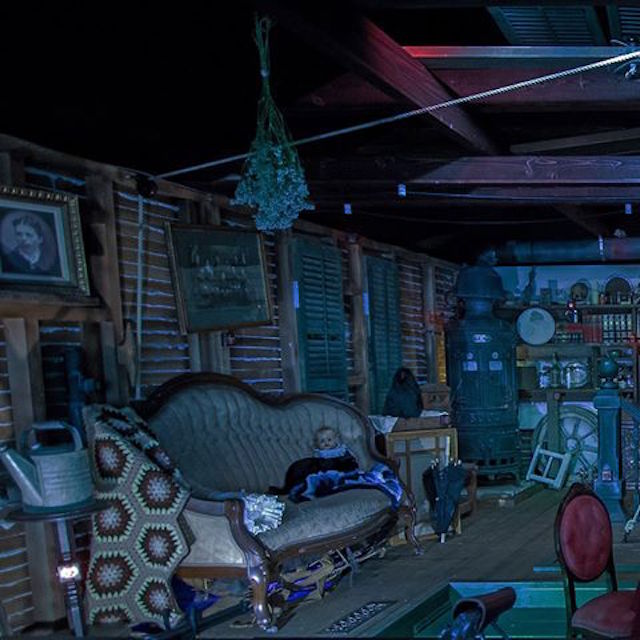 The newest find in the house, dubbed "Sarah's Attic," is being heralded as a wholly new discovery of a wholly new room by KRON4 (and advertised as such by the Winchester Mystery House). The space reportedly contained a pump organ, a Victorian couch, a dress form, sewing machines, paintings, and, according to the Chronicle, several guns of the family make. It's been boarded up since Sarah's death in 1922 and unexplored since, house representatives say.

But notably, Sarah's attic isn't being presented in its original location — instead, its items have been spirited away to another location on the grounds. "We have relocated the 'attic' to the central courtyard," a representative from the Mystery House wrote on Facebook. "Sounds like more of a NEW ATTRACTION vs. a FIND..." a potential guest fired back. Hey, don't shoot the messenger.

As you and every dog on your block no doubt noticed, the Blue Angels flew over San Francisco and the Bay this past weekend — wowing tourists and locals alike with their unmatched ability

It's decorative gourd season, motherf****rs, and this year — as any other — the place to be is Half Moon Bay. The self-proclaimed World Pumpkin Capital hosts its 46th annual Pumpkin Festival this weekend,