Millennium Partners, the developer behind Millennium Tower, and the Transbay Joint Powers Authority (TJPA) exchanged more sharply worded memos this week, with Millennium enlisting their expert to say that the building is still safe in a major earthquake despite having settled/sunk 16 inches and counting into the mud. They also released another report that stated "Continued dewatering of the Transbay Transit Center and other sites near 301 Mission St. is likely contributing to ongoing and future settlement of the building," to which the TJPA responded once again to say "Oh hell no."

As KRON 4 reports, the dueling memos and reports include the release of a report, commissioned by Millennium Partners, by earthquake-resistant design expert Ron Hamburger of the engineering firm Simpson, Gumpertz & Heger, which is being referred to by them and the homeowners' association (HOA) as "The Hamburger Report." Hamburger says that the 58-story building remains structurally sound and habitable.

As Millennium Partners spokesperson PJ Johnston restates it for ABC 7, "The building is safe. It's seismically sound, its structural integrity has not been compromised and that's a good thing."

The HOA is hiring their own outside experts, they tell the Business Times in a statement, "to review the Hamburger report, as well as identify an appropriate repair of all settlement-related conditions and recovery of repair costs from all responsible parties."

Millennium Partners released a second report from geotechnical and earthquake engineer John Egan of SAGE Engineers which bolsters their earlier stated claim that their tower's excessive settlement is the fault of the TJPA and the dewatering of soils around 301 Mission for the Transit Center and Salesforce Tower construction.

To that, the TJPA shot back their own letter Tuesday, for the sake of the court of public opinion, saying, "The allegations of the Millennium Tower developer, Millennium Partners, concerning the impact of the TJPA’s construction on the Millennium Tower are not accurate," and "false allegations concerning the impact of the TJPA’s work on the tower are designed to divert attention from [Millennium Partners'] own liability."

Also, they put out the timeline below, published by the Business Times, showing where the dewatering for both the Transit Center and Salesforce Tower began, and how Millennium Tower had already sunk 12 and 14 inches respectively when each of those processes began. 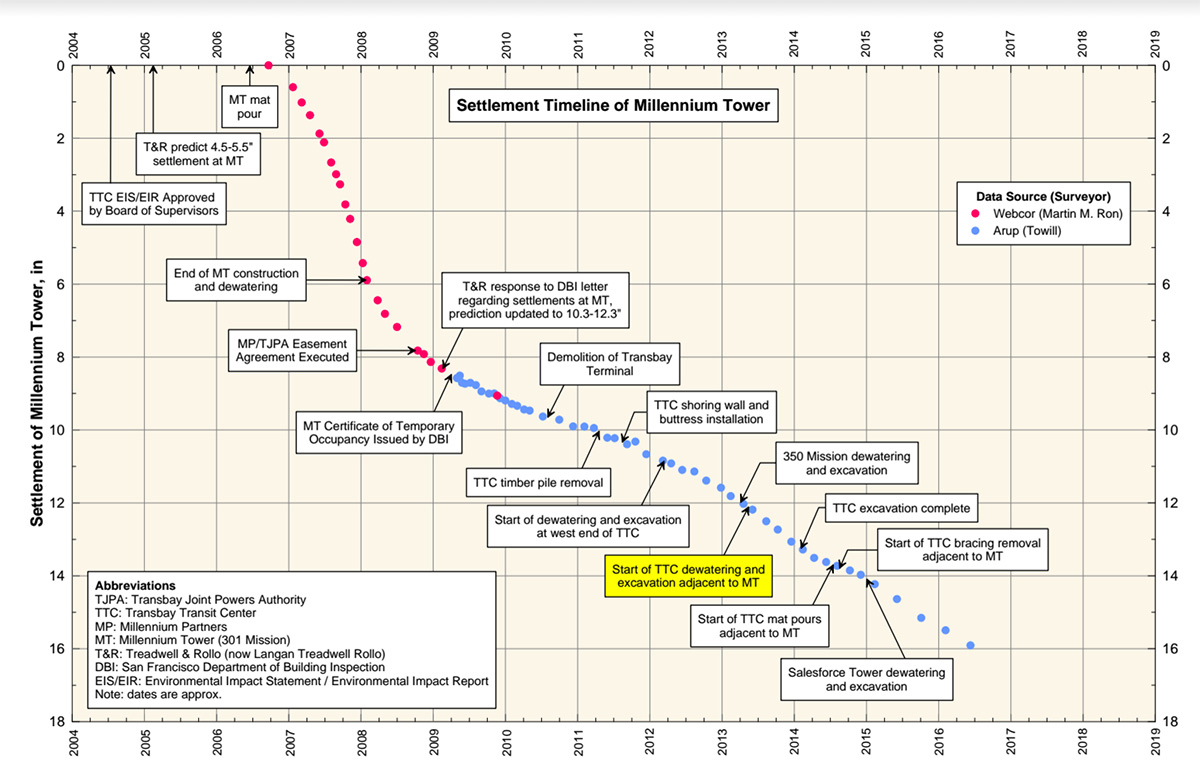 Ultimately it will likely be up to the courts to decide fault in what's sure to be either a massive lawsuit by the homeowners, or many individual lawsuits going on for years.

Homeowner Jerry Dodson tells ABC 7 that the latest report only causes more worry for him, because of its talk about a cracked and stressed foundation. "I think a lot of people are losing sleep over it, and I certainly am one of them," he says. And, he adds, regarding the latest set of dueling memos, "They shouldn't be putting the safety of homeowners in peril while they have the squabble between the two of them over who's responsible."

Revelations about the building's excessive settlement, and tilting, were first made public in early August, and the homeowners have yet to file what will likely be a construction defects lawsuit. Several homeowners have already sued for damages, and are seeking to have their property tax bills reduced or wiped out completely by the city, claiming their units are worthless.

An area of Golden Gate Park slated to be named after the late actor Robin Williams was the site of a violent crime Tuesday afternoon, when a gang of seven men attacked and

In these Troubled San Francisco Times, there is a lot of talk about who was here when, and what that does (or doesn't) mean. In an effort to both assist newcomers and take