As we wrap up San Francisco Appreciation Week, it's time to get sentimental. If you've only been here a short time, most of what's listed below will make little sense to you. But even if you're only lived here five years, you've likely seen a lot change  and witnessed the skyrocketing of rents and meal prices all over town in short order. Below, some of the things we and our friends miss most.

Being able to drive through downtown in the middle of the day.

Between ride-hailing apps, Transbay Transit Center construction, and Central Subway construction, not to mention a booming economy, getting through the FiDi or SoMa in a car on any random weekday is a new nightmare. (Photo: SF Fire/Twitter) 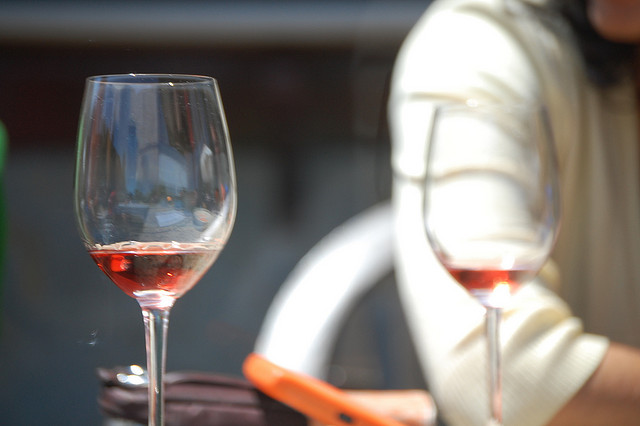 With few exceptions, wine seems to start at around $9 these days no matter where you go. 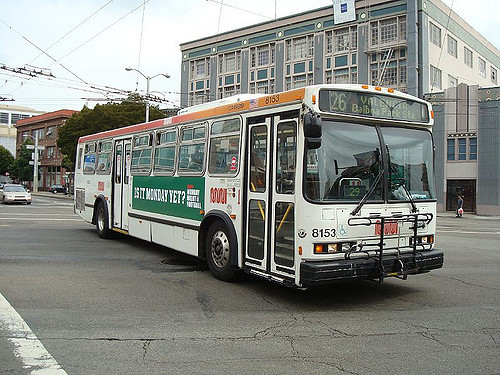 Photo: Dave Longa
The 26 began life as the 26-Guerrero Market Street Railway streetcar in 1892, and ran its last run on December 4, 2009. California Beat has a nice eulogy here (if you can look past their use of "MUNI" as opposed to the correct "Muni," for it is not an acronym people), but what I remember most fondly is what a treat it was when a 26 pulled up to the stop instead of a 14. For the price of a block's walk, riders got a far less...fraught experience, and a swifter ride. Sure, it was redundant and it probably made sense to retire the line, but that doesn't mean I can't miss it. — Eve Batey

Trannyshack (at The Stud) 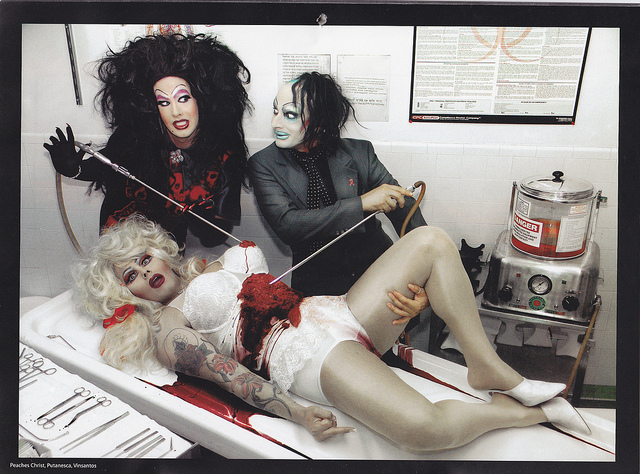 You may say that Mother is just as good and Oasis is better ventilated, but that probably only means you never went to Trannyshack in its heyday at The Stud circa 1999 to 2005. There weren't any fancy video projections or elaborate sets, but there were some seriously bizarre, offensive, fucked up, and envelope-pushing drag acts from performers like Vinsantos, Kiddie, and Suppositori Spelling that are lost to many peoples' foggy drunk memories, but live on somewhere in our hearts. SomeThing, on Fridays, still carries the torch at The Stud, at least.  Jay Barmann

The Bridge, Alexandria, and Coronet Theaters 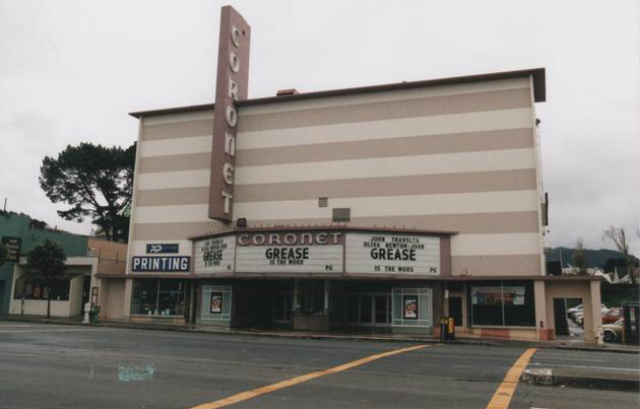 Every San Franciscan I know is nostalgic for at least one of our lost movie theaters, from the Regency to the Surf to one weirdo I know who even misses the Galaxy. I'm going to stick with my Geary Boulevard faves: The long-abandoned Alexandria (1923-2004), The (eventual baseball school) Bridge (1939-2012), and the crown jewel of The Coronet (opened in 1949, closed in 2005, razed in 2007). By the time I got here in the 90s, the Alexandria was already a ghost of its once-grand self, subdivided into three lesser parts, but The Coronet and Bridge were in great shape. I have so many great memories from all these places...the guy arrested during an Alexandria screening of Simon Birch, who yelled "dude, I'm hella cryin' about this little guy!" as he was pulled out, Andrew Dalton and my tradition of seeing midnight screenings of the Human Centipede movies at The Bridge, and every single movie I saw at the gorgeous Coronet. I like fancy new theaters with comfy seats and tables for food, a lot! But I still miss these grand old ladies (and so many others, since passed...though not the Galaxy) every time I try to decide where to catch a show. — Eve Batey

Restaurants and bars on top of tall buildings. 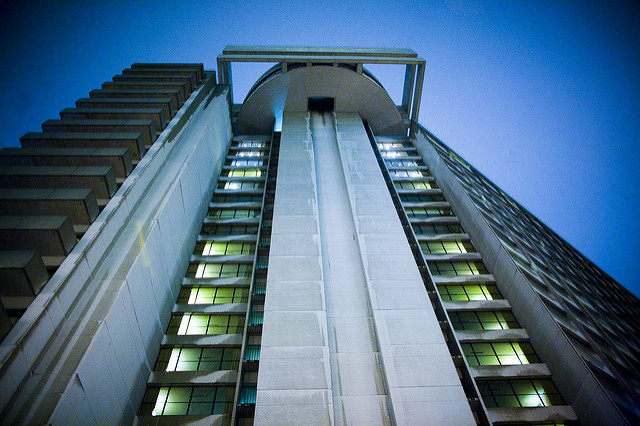 Something I miss all the time, and really don't understand why there aren't more of, are bars and restaurants at the tops of all the skyscrapers. Sure, there's the Top of the Mark, and the Starlight Room, and that terrible bar in the Marriott, but there was a time when there were a lot more of those open to the public. The downtown Hilton and the St. Francis had them (those spaces are now reserved for private events). The Bank of America building had the Carnelian Room. The revolving Equinox bar in the Hyatt Regency (where I had one of my first cocktails, with my parents and grandparents, on high school graduation day) is now a private club, but no longer revolves. Even the Empress of China, which wasn't as high up as those others, but still had the best view of Chinatown, is gone.  Rain Jokinen

The many BART payphones

Payphones, which, best as I can understand, were like cell phones but tied with some kind of rope to a box, were once a fixture of BART. Some remain, decorative odes to time gone by. The Chronicle found that there were still a few in 2013, but suffice it to say that the days for those that remain are numbered. Perhaps a few will stay on for emergencies?  Caleb Pershan

Mission Bay Golf Center
I'm by no means a golf player, but my oh my how I loved smacking balls at the 300-foot, 66 tee Mission Bay Golf Center. Opened in the 90s, long before Mission Bay was the fancypants Demolition Man-looking mini-city it is today, for eight bucks you could get a big bucket of balls and a driving iron to gleefully wallop them towards the freeway. In 2006, their landlord evicted them to make room for what we have there today, and my golf career was over. But every time I pass its former home as I drive on 280, I sigh. — Eve Batey 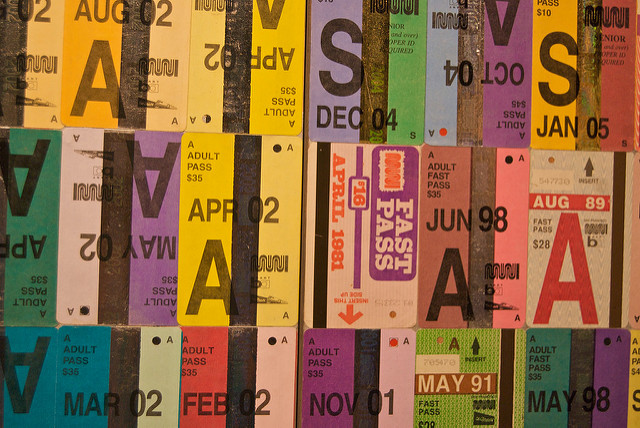 The colorful paper things were phased out in 2010, but it seems like just yesterday. 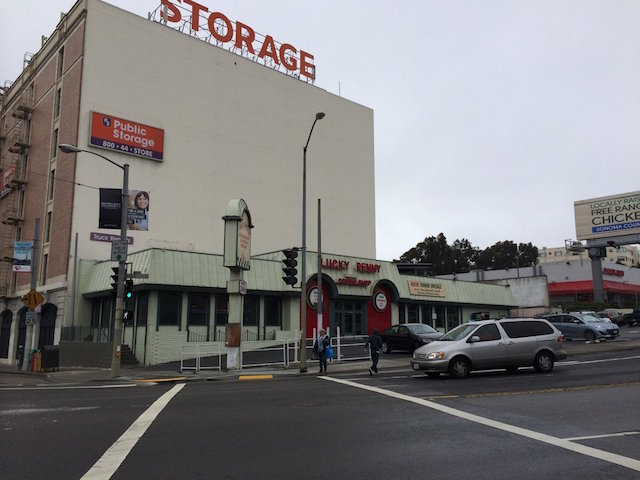 Time ran out for the Lucky Penny in December 2015, and what little taste there was of their all-night diner food, customarily consumed while drunk or stoned to high-heaven, has long since faded. However, memories remain, and the Lucky Penny's absence makes the heart grow fonder. — Caleb Pershan

The Detour
A lot of longtime Castro denizens have stories about the Detour that they'll sometimes share out the sides of their mouth  or just right out loud if they're unembarrassed about their long-ago sex-capades. But the notoriously dirty gay hangout went the way of all things early in the last decade, later becoming Jet, Trigger, and now, having expanded into the former next-door space, Beaux.  Jay Barmann 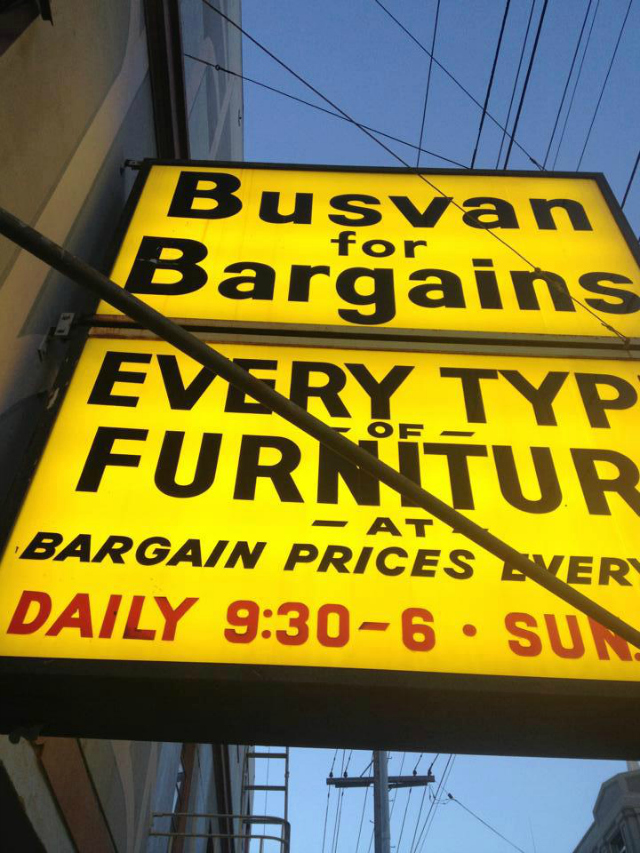 After 56 years in operation, in 2002 weird-ass store Busvan for Bargains closed its two SF locations so its second-generation owner could pursue a career in education. Started as a moving and storage company, it mutated into a furniture store slash curiosity shop over the years, filled with crap from Playland, the 1939 Golden Gate International Exposition, and more recent local iconography like junk from Nash Bridges and that crummy Eric Bana Hulk movie. And their furniture could have been worse! In fact, my greatest regret regarding a painful breakup I underwent in 2001 isn't the dissolution of the relationship, it's that I let that loser take a good Busvans dresser we picked out together (to be fair, his dad paid for it, so 'twas his right) when he moved out. — Eve Batey

Octavia can be slow, and that left turn situation is the worst. 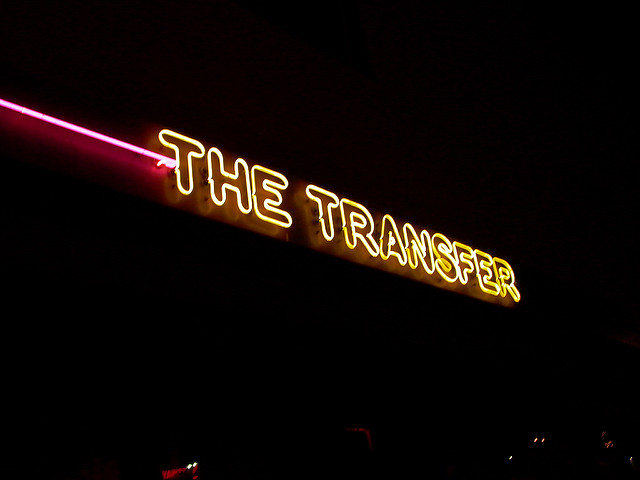 A prime, tragic example of gay bar gentrification in our recent past  along with Marlena's in Hayes Valley becoming that boring travesty Brass Tacks  is the Transfer, the slightly smelly, divey and awesome watering hole at Church and Market that was host to regular, raucous parties in the mid- to late aughts before it died a quick death at the hands of The Bar on Church. That was a relocated, more annoying version of The Bar on Castro (now Q Bar) with mirror mosaic tile on the wall, and that died a fairly quick death too within just a couple years, becoming the mostly straight cocktail bar it is now, Churchill. The bathrooms may be an improvement, but man, I miss the seedier good old days.  Jay Barmann 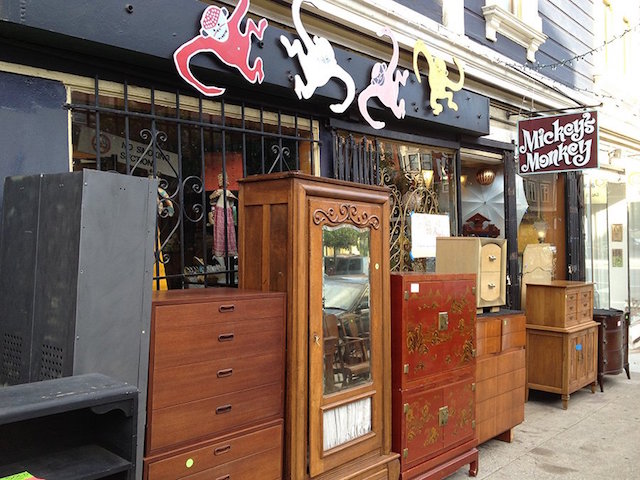 Anything that I have that is cool is probably from the Lower Haight mainstay Mickey's Monkey. That store was fun and packed to the brim with antique furniture, weird doodads and random thotchkies. Sadly, it closed after 19 years this past spring. Likewise, the Apartment on 18th Street, another destination for the finest in random shit, is also gone, as is Therapy's first store, which sold furniture for 13 years on Valencia. See you at Ikea, I guess. —Caleb Pershan 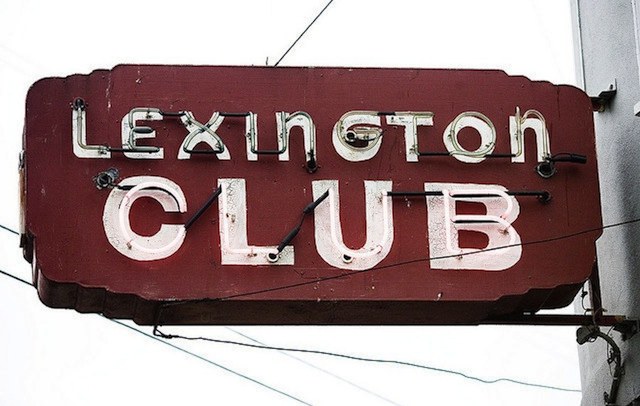 The onetime lesbian dive is now a cocktail spot called Wildhawk, and they have a plaque commemorating the Lexington, and there are still Lex-branded lesbian parties occasionally elsewhere. But sigh.

Funky Door Yoga in the Upper Haight (Waller between Stanyan and Schrader) has closed its namesake funky door for good. Business owner Sarah wrote on her website and Facebook page that "much has

The cool, transit-centric light installation unveiled two years ago by the non-profit behind the Bay Lights remains a project in motion, though an initial plan to break ground on it in 2016 appears

—
16 Things San Franciscans Are Nostalgic For In 2016
Share this