Imagine walking around AT&T Park in the year 2100. Things might be different: For one, you might be protected from a greatly risen ocean by glass barriers of 3-4 feet.

That's just a tiny example of the catalogue of design concepts put forward by a study of the effects of sea level rise on Mission Bay. The work's findings, more "imaginative" suggestions than concrete plans, were highlighted by the Chronicle's architecture writer John King.

The $200,000, 80-page document was created by the consultancy groups Arcadis US, Inc. and CallisonRTKL. SPUR handled the report from the city's end, and five municipal agencies including the Port of San Francisco and the Planning Department were involved. The Bay Conservation and Development Commission would have final say on any idea from the report, which was begun in 2014 and came out yesterday. 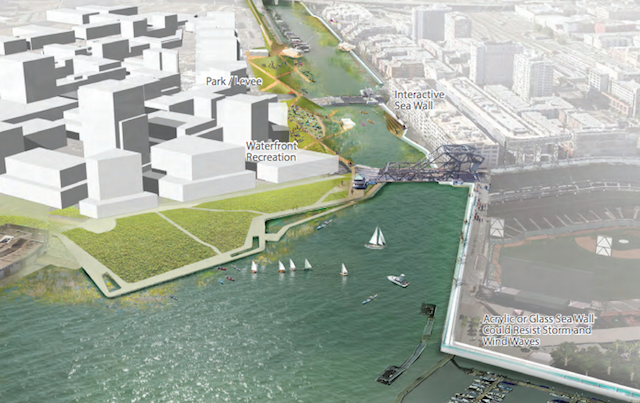 Rising tides, the product of climate change, are expected to change nearly every coastal landscape. As such, the study presumed the "most-likely" sea level rise scenarios of 11-inches for 2050 and 36-inches for 2100. Considering those circumstances, ideas include levees, seawalls, and even artificially separating Mission Creek from the bay, turning it into what appears to be the equivalent of a lock. Each idea comes annotated with pros and cons, carefully considering the implications of sea level rise on important infrastructure elements, such as the Third Street Bridge. Observe:

“It’s important for our people to expand our own minds, and for people to understand they needn’t be afraid [of the future]," Larry Goldzband, the Bay Conservation and Development Commission's executive director told the Chronicle. “That doesn’t mean the ideas will become reality tomorrow, or without a lot of community review and discussion.” Mission Creek, with its low-lying developments, was selected as a case study for the rest of San Francisco, not to mention port cities the world over.

A lot will happen between now and the year 2100, and imagining oneself on a jaunt that year around the ballpark takes some effort. That's the trouble with making long-term considerations for climate change. It's easy to get hung up on the little things and miss the big picture. Will it still be AT&T park, one wonders, or by then will AT&T have gone the way of Pac Bell? Who's to say! I do, however, trust the Giants will be pretty good.

After just nine months in business, Volta has called it quits. Co-owner Umberto Gibin broke the news to Inside Scoop, saying Saturday was the restaurant's last day. Having just opened in December, this

Dede Wilsey's "personal fiefdom" managing the deYoung Museum and Legion of Honor shall apparently continue with only a few small changes, at least according to reports from special sessions of the museums' board