The civic motto for Anthony and Eddie, who are resident leaders and artists in a place they call Box City, is simple: "These may look like boxes, for us poor they are homes."

A group of 15 to 20 residents living in makeshift shacks that the city considers a homeless encampment — one slated for removal along with all others — Anthony and Eddie see instead as a cooperatively self-managed community. Box City is also the beneficiary of assistance from the St. Francis Homelessness Challenge, run by onetime mayoral candidate Amy Farah Weiss. A website dedicated to that effort terms Box City "a transitional community." Here, along 7th Street by the Caltrain tracks, residents "have built their own secure sleep shelters out of found materials."

The site concedes that "Obviously this is not an ideal living area for the 15-20 residents since the train goes right by up until 2AM... but it is a place that they have been living in community for months."


If there was another location that was more ideal for Box City to relocate their 15-20 residents they would be interested in hearing about it and working together, but it seems like a great location to try out providing more services and creating more accountability on both ends (meaning both the city and the encampment residents) because it is an unused plot of land and the residents are very community-minded, reasonable, and cooperative.

As the Chronicle highlighted in an article yesterday, that means providing 24/7 toilet access, supporting cleanliness and organization, and providing incentives for Box City residents to be good neighbors, such as gift certificates to local businesses. That's a system somewhat similar to one used by Downtown Streets Team, a project that relies on homeless volunteers to clean streets and distribute supplies in order to receive vouchers. 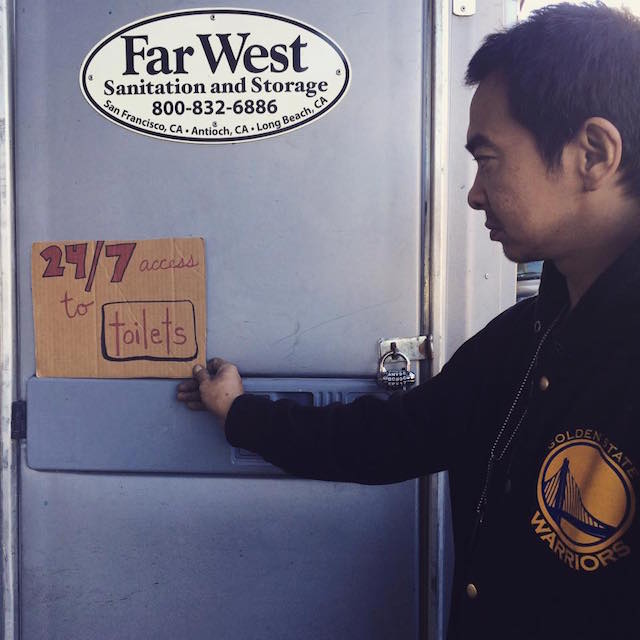 "I built this because I can’t keep a tent,” Anthony Spann, 40, tells the Chronicle of his shack made of discarded wood. “Every time I left my tent, it’s been stolen. This gives me a real roof for once, so while I’m out here waiting for things to get better, I can be more secure.”

Weiss provided the toilet, a porta-potty that residents have decorated and fashioned with a lock, with her own personal funds due to liability concerns. The St. Francis Homelessness Challenge pilot program's short-term fundraising goal and budget for Box City is $4,500, with $1,500 for "Supplies and stipends for artists and builders (including residents and non-residents)" as well as $2,000 for "Gift certificates to purchase materials and tools to enhance structures and support off-grid living necessities (Hardware stores; Sporting Good Stores; etc), off-site laundry (Brainwash, etc), and other investments to support the organization, sustainability, and infrastructure of Box City."

Weiss emphasizes that although she wouldn't mind seeing more transitional communities like Box City, this particular encampment, one of about 75 total in the city, can't accept any more residents. "If you have more than 15 or 20 people on a lot at a time, it all breaks down," Weiss told the paper.

Jeff Kositsky, Director of San Francisco's newly formed Department of Homelessness And Supportive Housing, has a mixed reaction to the situation. "I appreciate the sentiment and applaud the do-it-yourself spirit around it,” he said, but worried that such efforts might “normalize encampments.”

Sunday's 33rd annual Folsom Street Fair was at least 300,000 people strong according to organizers, and locals and fetish tourists alike flocked to SoMa to take in the sunny spectacle and brave