Fans of contemporary art will recognize the name of Jenny Holzer, most famous for her word-based electronic artworks and installations, which often have come in the form of streams of digitized text  as in this 1990 installation that snaked through the atrium of the Guggenheim in New York, or her smaller-scale electronic signs like this one in the SFMOMA permanent collection. The 66-year-old American artist was just selected to produce a large-scaled LED piece for the atrium of the Transbay Transit Center, all part of the center's $4.75 million public art budget, as the Chronicle reports.

The renderings, like the ones above and below, don't show the work off very well, but suffice to say it will feature "11-foot-high texts that will run around a glass enclosure surrounding a central atrium." The stream of words will be visible from outside the transit center as well, and Holzer says she plans to combine both her own text and that of Bay Area authors. 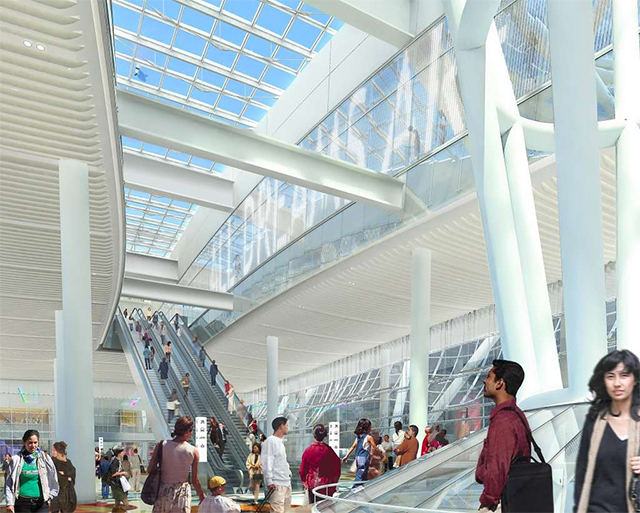 More recently, Holzer has been known for grand, ephemeral project pieces like this one at the Louvre in Paris, which only live for finite periods of time. Once featured on PBS's excellent Art 21 series, Holzer said, "I like my pieces to be very short, at moments. At other times I want them to be more sustained and capable of holding people's interest."

The Transbay Joint Powers Authority board reportedly voted on the commission and approved it last Thursday along with several others. Holzer will be getting $182,000 for design and project oversight, and fabrication and installation are estimated to cost $740,000.

Joining Holzer's work in the center will be works by local artist Ned Kahn  famous for the shimmering atrium at SFO's BART terminal and the dynamic facade of the SF PUC headquarters  who'll be doing a water feature on the building's landscaped roof, as well as LA-based artist Tim Hawkinson, whose 41-foot tall "Guardian" sculpture we first learned about back in 2011, made out of rubble from the demolished Transbay Terminal. There will also be decorative floors by New York artist James Carpenter and Bay Area artist Julie Chang, according to the Chronicle.

Construction on the transit center is expected to be complete in the fall of 2017.

Previously: Transbay Site to Get Big, Awkward Sculpture Made Out of Transbay Terminal Scraps

Swaggering up to a Tenderloin corner where, by contrast, area denizens typically stagger and stumble, Black Cat (Eddy and Leavenworth), a new restaurant arrival, is an already lively — if unexpected — destination. Announced in

For NFL fans, Twitter has mostly just been a platform for issuing death threats to placekickers who miss crucial field goals. But that all changes tonight, when Twitter begins livestreaming Thursday Night Football,