As Labor Day passes, we start to say goodbye to whatever high hopes we had for making the most of our oh-so-wintry summer months, but we start to hope for another couple months of more pleasant days and nights and look forward to our local theater season revving up again. Some exciting things are happening in SF and across the Bay  and I'm not just talking about Hamilton, though, yes, that is exciting.

From world premieres at The Magic and Berkeley Rep, to the US premiere of a new Kneehigh Theatre piece also at Berkeley Rep, to the West Coast premieres of the Broadway hit King Charles III and Tom Stoppard's newest The Hard Problem at A.C.T., the next couple of months have some potentially great things in store for theater lovers.

Also, via a hint last week, we learned that the under-renovation Curran Theatre is set to reopen a bit early, in the late fall, with a couple of soon-to-be-announced preview events, before the January opening of Fun Home.

Below, a semi-comprehensive, but incomplete guide.

For the 25th anniversary season of this small Berkeley theater, up the block from Berkeley Rep, Aurora is re-staging the play that launched their company back in 1991 at the Berkeley City Club, Dear Master. The play is "A dialogue in letters between the two great 19th-century French novelists, George Sand and Gustave Flaubert... [and] an elegantly orchestrated play, providing flesh-and-blood portraits of these famed intellectual writers and revealing their fears, desires, heated opinions and friendship during an era marked by violence and political polarization." September 8 through October 2, tickets here

The premise: It's the near future, Queen Elizabeth II is dead, and Prince Charles has become king. The twist: Playwright Mike Bartlett's Olivier Award-winning, Tony-nominated comedy is written entirely in Shakespearean English, leading Entertainment Weekly to hail it as "fresh, thrilling and fearlessly comic." And yes, of course, Princess Kate is a central character. September 14 to October 9, tickets here.

A.C.T. artistic director Carey Perloff has had a long relationship with acclaimed English playwright Tom Stoppard, and that continues this season with the West Coast premiere of The Hard Problem, which had its US premiere earlier this year in Philadelphia. It's Stoppard's first new play in a decade, centering on conflicts in the sciences and the tension between mind and matter, and the London Evening Standard called it "An intellectually charged piece that delights in the slippery nature of language and pulses with interesting ideas." October 19 to November 13, tickets here. 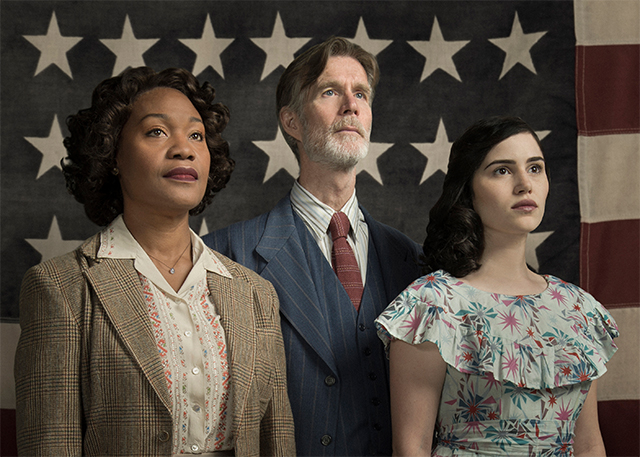 Director Lisa Peterson and adapters Tony Taccone and Bennett S. Cohen have taken this 1935 Sinclair Lewis novel about a demagogue who becomes president of the United States by promising to return the country to greatness, and brought it to life for a contemporary audience sure to recognize some parallels. September 23 to November 6, tickets here.

The Last Tiger In Haiti

This co-production with La Jolla Playhouse marks the world premiere of a play by Jeff Augustin developed at Berkeley Rep's Ground Floor incubator, centering on five kids raised in servitude in modern-day Haiti, and how they look back on this adults, through the lenses of their own storytelling. October 14 to November 27, tickets here. 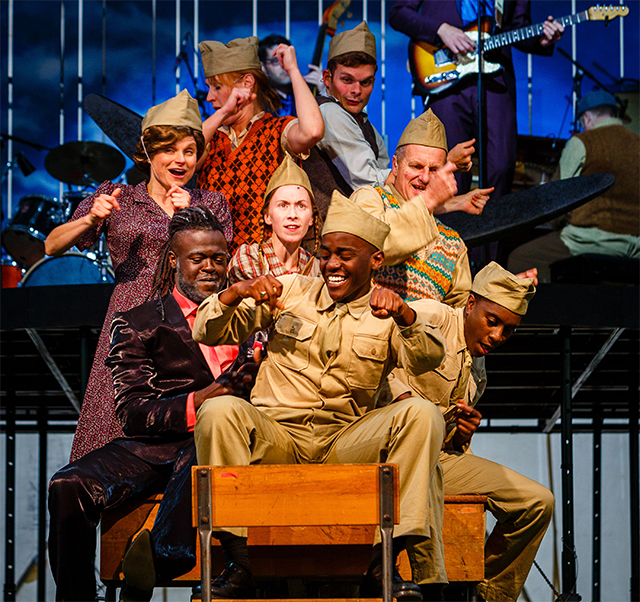 An earlier cast photo of 'Adolphus Tips' by Steve Tanner

946: The Amazing Story of Adolphus Tips

Those familiar with the work of England's Kneehigh Theatre, who have had a relationship with Berkeley Rep for several years now brining their stunning productions of Tristan & Yseult and The Wild Bride, will be psyched to know they're back this holiday season with a new piece set during World War II in the seaside village of Slapton. As usual for Kneehigh, you can expect elaborate puppetry, stagecraft, and live music throughout, and I can almost guarantee this one will be good without even seeing it. December 2 through January 15, tickets here. 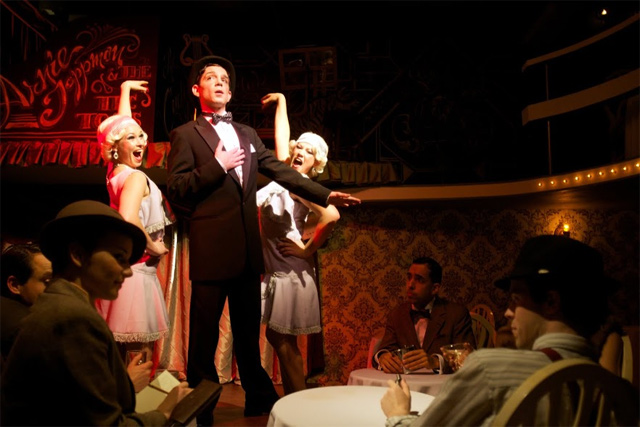 Photo courtesy of the Boxcar Theatre

The immersive theater piece that impressed thousands of local theatergoers in 2014 (see SFist's review here) returns in a newly built out, permanent location in North Beach this fall. Previews already began in August, but it's the type of complex operation that needs a lot of previews, so the official opening night and press review window doesn't come until early October. Guests are encouraged to dress up (jeans and t-shirts aren't allowed), and you'll get to start your experience in either the bar, the cabaret, or the casino, with optional add-ons like a reserved table for $10 to $30. As before, different vignettes play out in each room, and in spaces in between, and while you shouldn't be interacting with all the performers (just the waitresses and casino dealers), it is a pretty fun and strange way to step back in time to San Francisco's (fictional) past. Now until (maybe) forever, tickets here.

Set in the picturesque East Bay hills just west of Berkeley, in Orinda, Cal Shakes is an awesome experience no matter what the play. And Othello, Shakespeare's powerful tragedy and meditation on race, marks the directorial debut of new artistic director Eric Ting. September 14 to October 9, tickets here

The Most Happy Fella

Set in San Francisco and the Napa Valley in the 1920's, this classic Frank Loesser (Guys and Dolls) musical from 1956 about a May-December romance with an aging winemaker is getting a revival up in Petaluma. Performances on September 10 and 17 come with wine tastings from Coppola Wines. Through September 25, tickets here.

This new play by Asian-American playwright Young Jean Lee is part of what KQED describes as "the burgeoning genre of wild African-American satire," and "perched somewhere between a minstrel show and a drawing room comedy." As Crowded Fire Theater describes it, "Audiences are confronted with clichés, distortions, and brilliant sleights of hand that force us to go beyond the lampoon and shift the lens through which we perceive race in order to confront our own bias." September 22 to October 15, tickets here

Get set for your musical theater nerd friends to geek out over this one, the famed 1986 rock musical by former ABBA members Benny Andersson and Björn Ulvaeus, with lyrics by Tim Rice, all centering on a Cold War-era chess tournament between two men, one Russian and one American. September 15 to October 15, tickets here

Directed by Sean San José and written by collaborator Richard Montoya, this world premiere play "explores the conflicts and supersized personalities in the iconic border town of Nogales." This latest piece from one of the three cofounders of SF's own Culture Clash should make a splash with its "powerful story about a contemporary America that has lost its moral center." Opens October 12, tickets here

This play, set in the Catskills in 1962 and based on real events, centers on a group of "self-made women" who are actually heterosexual men who escape to the country to cross-dress together. It's written by four-time Tony Award winner Harvey Fierstein, and is sure to be funny in this, its regional premiere. October 7 to November 6, tickets here. 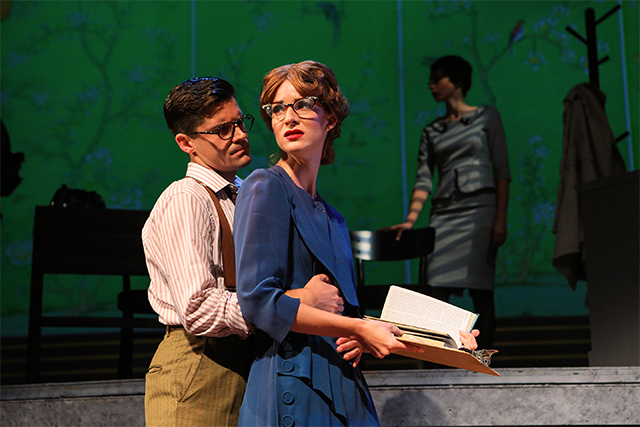 From SF Playhouse's 'City of Angels'

Our scrappy local producer of normally large-scale musicals brings us this '90s hit, with music by Cy Coleman and lyrics by David Zippel, centering on a struggling screenwriter in 1940s Los Angeles. Through September 17, tickets here.

SF Playhouse's Sandbox Series brings this world premiere by Phillip Howze to the upstairs Rueff at The Strand at 7th and Market. The contemporary play centers on one young woman's emotional journey "punctuated by bursts of abstraction." And this marks (I believe) this theater company's first use of A.C.T.'s black box space at the Strand. Through September 25, tickets here.

Originally produced in New York, where the New York Times called it a "puzzle box of a play," this piece by local playwright Christopher Chen was inspired by legendary dissident artist Lin Bo, and deals with issues of truth, art, social justice, and cultural appropriation." Through September 25, with later repertory performances. Tickets here.

Who's Afraid Of Virginia Woolf

In this highly ambitious repertory season, the Shotgun company is tackling this, one of the angriest plays in American literature, by Edward Albee. Directed by Mark Jackson, this lengthy (3.5 hour), legendary play will "ignite the walls of Shotgun’s intimate Ashby stage," Jackson promises. October 12 through November 13, plus repertory performances. Tickets here.

Hedwig and the Angry Inch

The King and I

Wetlands, a meadow, rolling hills: Those are among the features encompassed in 400 acres of land donated to Yosemite by a nonprofit conservation group who purchased the land from private owners. The tract,

The 7th annual Oakland LGBT Pride celebration goes down this weekend, and attendees should expect live music, parties, and, of course, a parade. Headliners include Deborah Cox and Lisa Lisa, and there will