The nine-day-old Chimney Fire in San Luis Obispo County has forced the closure of Hearst Castle, arguably the central coast's biggest tourist attraction. As CBS 5 reports, flames came as close as three miles from the mansion on Saturday, "prompting California State Parks officials to cancel tours and close the grounds to visitors."

The fire broke out on August 13 and is now 35 percent contained, but high winds caused the fire to cross a containment line Saturday, prompting new evacuation orders for communities north and west of Lake Nacimiento. So far it's destroyed 48 structures, and covers 24,000 acres.

According to the San Luis Obispo Tribune, firefighters are setting back fires today to protect Hearst Castle, but the flames are now 2.5 miles away. 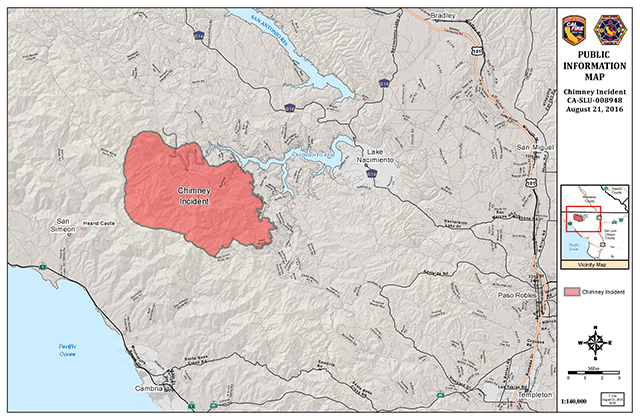 Area residents, some of whom own vacation homes in the area, say they've never know a wildfire this big to hit the area. State Parks supervising ranger Robert Chambers tells CBS 5 he can't recall any other time that a fire forced the closure of Hearst Castle, saying, "A fire has never come this close before."

Dramatic photos show huge plumes of smoke billowing just behind the hilltop perch of the landmark mansion in San Simeon, which was built between 1919 and 1947 by William Randolph Hearst, and designed in collaboration with architect Julia Morgan. Hearst died in 1951, and the mansion became a state park in 1958, while the Hearst family continues to use a smaller Victorian house on the property as a retreat.

Should the fire approach much closer, a contingency plan is in place to relocate the mansion's large art collection. But Chambers tells CBS 5, "We’re not at the point where we need to move anything, our plan is to keep the artwork sheltered in place."

Whoa. The ferry building is on fire. pic.twitter.com/muix37NCz9— Miss Bunny Mickley (@bunnyhalberd) August 22, 2016 A one-alarm fire in a Ferry Building vent spread to the structure's roof this morning,

Former model, television personality, and inventor of smizing Tyra Banks is going to be donning a new hat next spring as college professor when Stanford (no joke) will be hiring her to co-teach