This Sunday night’s show at Oasis offers a can't-miss treat for old-school drag fans who remember the days when no one carried a “cell phone”, when drag queens were still not allowed on reality TV, and when we wore t-shirts signifying allegiance to early 2000s local drag figures like Princess Kennedy, Squeaky Blonde, and a hypnotic fright queen called Vinsantos. That fright queen called Vinsantos returns to the San Francisco stage Sunday for a one-night cabaret engagement called Harlequeen Nights, a benefit for the co-op striving to save The Stud. SFist spoke with Vinsantos, the Miss Trannyshack 2000 who’s since moved to New Orleans and founded the New Orleans Drag Workshop.

“Harlequeen Nights is a look into my life as a drag and cabaret artist, told through a series of some of my favorite and most infamous performances,” Vinsantos said. “The audience can expect snippets of the various aspects of my work. There will be live music mixed with stories mixed with films mixed with a broken little clown of a man mixed with a full-fledged woman mixed with the good old-fashioned art of the lip sync.” 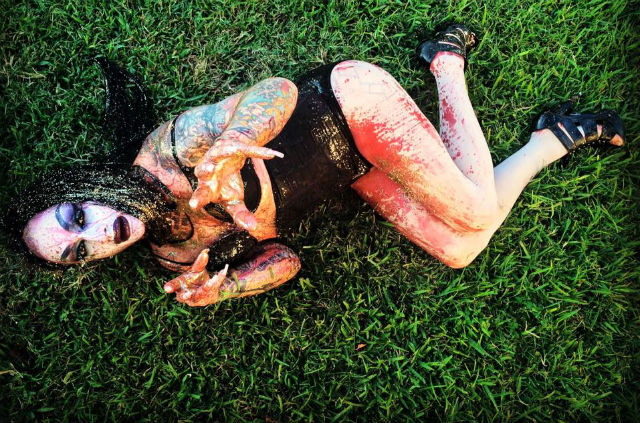 While Harlequeen Nights is at The Oasis, it’s still a benefit for The Stud and a celebration of acts that originated there. “My most memorable moment at the Stud was the night of the fire,” Vinsantos said. “I'm not really allowed to say too much about it, but I will tell you that it was an accident and I had it completely under control.”

When not setting the place on fire, Vinsantos used big screens and projections onstage in a way that was groundbreaking at the time to win Miss Trannyshack 2000. Regrettably I could not find video of the winning number. (“YouTube immediately flagged it for copyright infringement,” he admitted. “Pink Floyd has some pretty serious attorneys, I guess.”) I did, however, find the completely insane video below of Vinsantos’ final performance as the reigning Miss Trannyshack at the 2001 pageant, a 23-minute opus with projection art, cameos, a whole lot of nostalgia value, and fire. (Back then, clubs still permitted flames onstage because Great White hadn’t caught a bar on fire yet.)

But Vinsantos remembers the performance that won him the crown. “My winning number at the 2000 Miss Trannyshack pageant was a multimedia explosion of ideas,” he recalled, describing an elaborate number involving projected newscasts about Visantos, a hundred bottles of branded Vinsantos perfume and an is it real or fake? onstage argument that depicted Vinsantos as furious with the audience. “I denounce the club, the pageant, and everyone involved. I then escape out the back door and stumble home for a most pathetic and ultimate breakdown in my bathtub. Just when I'm getting ready to end it all, my fairy godmother Squeaky Blonde floats down from the sky and delivers an inspirational speech that gives me the courage to pull my shit together and get back on the stage to give the audience what they originally came to see.”

The number is still not over.

“In real time, I enter through the back of the audience riding atop a human woolly mammoth hybrid creature on stilts,” he explained, hinting at the manner of next-level drag hyperbole you can expect at Sunday night’s show.

“There will definitely be a lot of dark comedy and, if I do my job well, some tears,” Vinsantos said. “Sound confusing? Well, it is. Welcome to my world."

Harlequeen Nights plays at The Oasis on Sunday, August 21 at 8 p.m. Tickets are available online.

Related: Heklina Talks About Mother, The New Incarnation Of Trannyshack At The Oasis

Now topping 81,000 acres, the massive, four-week-old Soberanes Fire in Big Sur and to the east continues to burn and spread as Cal Fire estimates they have it 60 percent contained. Over

When a cyclist dies on the streets of San Francisco, the tragedy is often memorialized by a ghost bike. You've likely seen the all-white bikes chained to various poles or signs near the

—
Vinsantos, Legendary Queen Of Trannyshack's Heyday, Returns To SF Sunday For A One-Night-Only Cabaret
Share this