The already peculiar Madonna Inn is about to get a whole lot more so. The famed San Luis Obispo spot known for its 110-uniquely themed rooms will soon be welcoming to its grounds 101 painted cows.

Organizers of the roving series of fiberglass and painted life-sized cows known as CowParade decided that to kick things off in SLO they should put all the artwork in one spot (it is traditionally placed around a city). And what better place for 101 unique cows than the 110-unique roomed Madonna Inn?

Opened in 1958, the inn is located right on 101 and is famous for themed accommodation like the "Safari," "Jungle Rock," and "Fabulous Fifties" rooms (in addition to the waterfall urinal).

"'Anybody can build one room and a thousand like it,'' inn founder Alex Madonna told the New York Times back in 1982. ''It's more economical. Most places try to give you as little as possible. I try to give people a decent place to stay where they receive more than they are entitled to for what they're paying."

The cow unveiling is set to take place on September 17, and will feature one cow being painted live by famous LA graffiti artist Man One. "Man One’s graffiti art is comprised of his trademark bold, colorful art strokes and has been featured at famed galleries and museums including The Getty, Los Angeles Contemporary Museum of Art, and the Smithsonian Institute," reads a press release.

The event is free and open to the public. 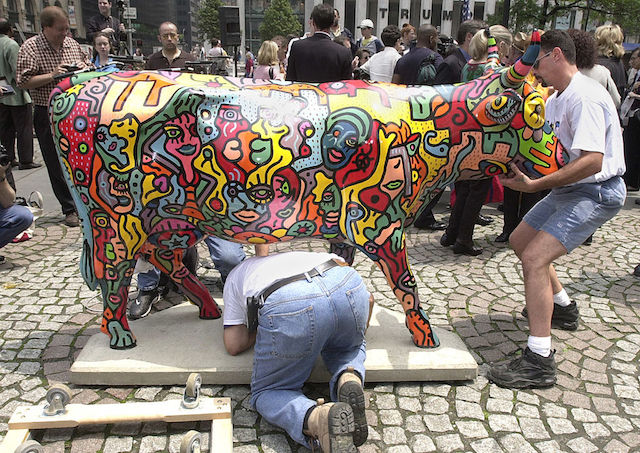 Photo of workers bolting down a CowParade cow in NYC by Chris Hondros via Getty.

This week we covered a lot of food world happenings at SFist. There was, for starters, a mouth-watering recap of some over-the-top good festival food at Outside Lands. We had big news that

Lyft investor General Motors is apparently not content with its 9 percent stake in the ride-hail company, as The Information reports that the car manufacturer just made an offer to buy Lyft outright.

—
101 (Fiberglass) Cows Are Coming To The Madonna Inn
Share this