The intersection of Noe Street, Market Street, and 16th Street, for those familiar with it as a pedestrian, driver, or cyclist, is the worst. Is it objectively worse or more dangerous than a number of other notoriously chaotic and dangerous intersections in the city? Perhaps not, and just a few blocks down the Market/Octavia/101 Freeway interchange can probably give it a run for its money, and that's been talked about for years. Now, as part of its Upper Market Street Safety Project  part of the larger Vision Zero initiative to end traffic fatalities and serious injuries of all kinds  the SFMTA has released its final proposal for new striping and bulbouts to further improve pedestrian safety at this notoriously hairy Noe intersection. Hoodline reported on the plan, released late last week, noting that the stretch of Market between Octavia and Castro saw 27 collisions between vehicles and pedestrians between 2007 and 2012, 32 vehicle-bicycle collisions, and 102 vehicle-vehicle collisions in the same period. The last four years, which have seen a bunch of new construction in the area, have also made things more chaotic.

The latest proposed changes for Noe and Market, which you can see better explained below, follow on other, similar ones made over the last couple of years, as traffic in the area has only increased and new drivers  especially Uber and Lyft drivers who are unfamiliar with it  make matters all the more dangerous at this six-way intersection that also involves streetcars making left turns all day long.

As you can see, the new ideas are few, and include making concrete sidewalk bulbouts (shown in orange) where currently temporary barriers and tan-painted areas are creating buffer zones for pedestrians  of which there are many passing through, particularly on drunk weekends. 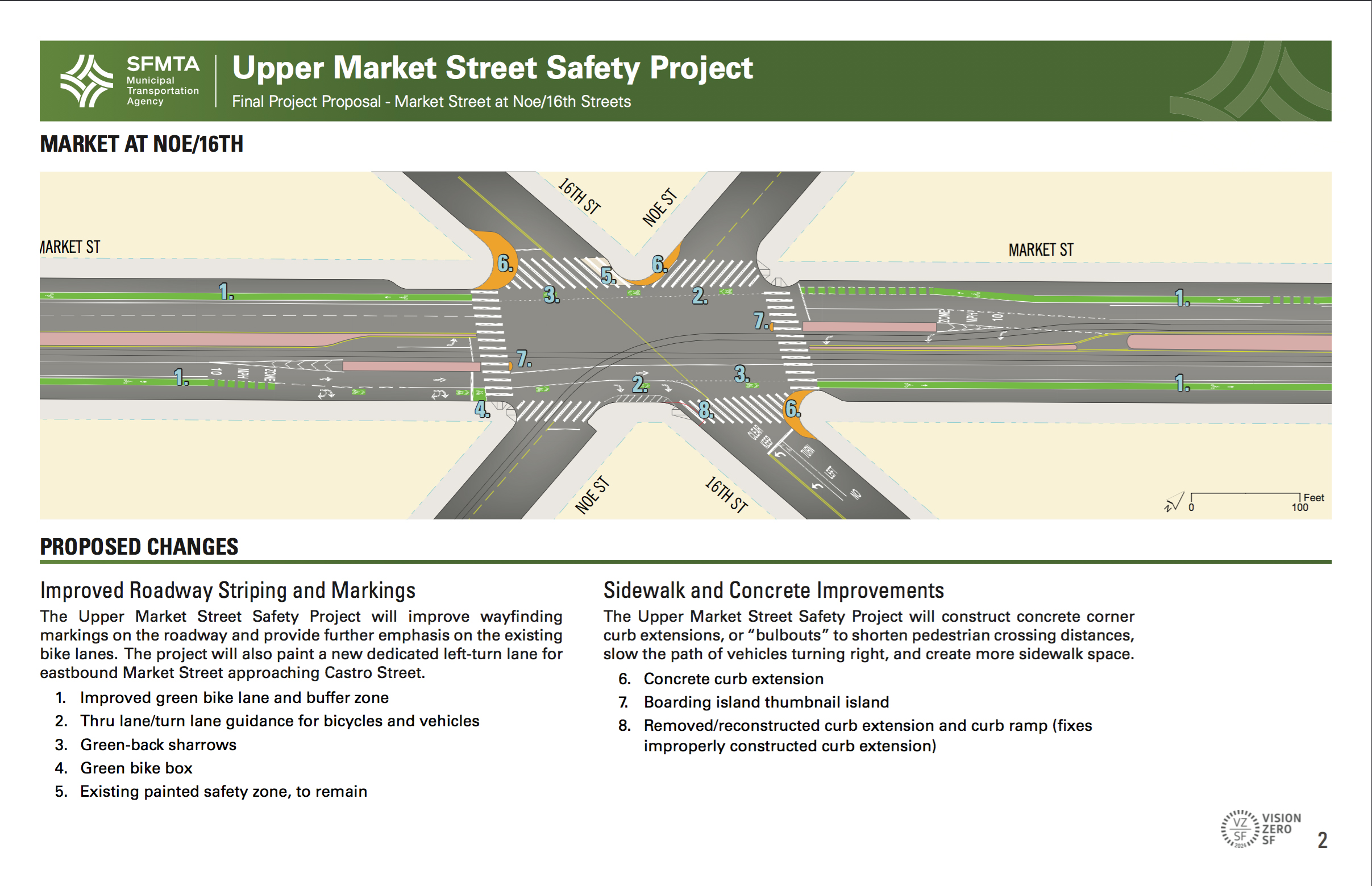 Is any of this really enough, though? It's a high-traffic, six-way intersection with crosswalks in all directions, and the F-line car rumbling through, made even more chaotic every Wednesday from March to November with Noe between Market and 15th getting closed for a farmers' market. "That intersection is so f-ing dangerous," said one neighborhood resident to Hoodline when, just the other week, a farmers' market worker was struck by a car. This is also the intersection where an SUV got crushed between two historic streetcars back in 2009.

Also, there seem to be almost no drivers turning right off of Noe heading downtown on Market who are aware that pedestrians have the right of way, and that cars do, in fact, have to wait for a Walk signal to end as people cross Market Street in the crosswalk  but this can often leave cars, the ones who do stop, confused and stranded in the middle of the intersection at rush hour blocking the traffic trying to enter the intersection from 16th. And don't even get me started on the narrow lane heading down 16th, made narrower by an existing bulbout, where cars traveling downhill have to navigate past often clueless pedestrians who don't realize how near death they are on that curb, as they're waiting to cross 16th.

The similarly structured intersection at Sanchez/15th/Market is somewhat less of a clusterfuck without the F-line left turn, and without the high volume of traffic up and down 16th Street.

SFist spoke to one local traffic safety expert who wished to remain anonymous who explained that the SFMTA is faced with the difficult task of doing what they can, with limited budget, to reduce hazards at as many intersections as they can  and the wholesale overhaul of Market/Noe/16th that would be required isn't really feasible since, virtually, it would require altering the way the existing street grid works. "There are a ton of constraints in what could be done," this person said. Further, as discussed above, work needs to be done in so many locations, that the particular dangers of this highly dangerous spot are just some of many  Potrero and 16th and South Van Ness and Mission have also been cited as extremely dangerous as well, in addition to Market and Octavia.

Just yesterday, in fact, Hoodline brought word of a petition that's been started to get a traffic light installed at the intersection of Hayes and Octavia. Even though the SFMTA says "there's a solid safety history at this location," the petitioner, neighborhood resident Christine Harris, was appalled by a story of a puppy being struck and killed by a driver at the intersection, and was motivated to shoot the video below showing just how many drivers ignore the stop sign as they travel up Hayes.

According to our anonymous source, the SFMTA is spread thin when it comes to the many intersections that need help  and it's preferable, in their thinking, to reduce injuries and fatalities by 80 percent at 10 intersections than to reduce them 99 percent at just two intersections. "You really need to look at the entire package of improvements planned throughout the city as part of this program, and then consider what you'd have to give up elsewhere to do a more thorough overhaul of the Market/Noe intersection," says the source.

But really? A couple of new bulbouts and we're calling it a day?

This is an intersection that practically requires a daylong training course to learn how to navigate it safely and properly. The least the SFPD or SFMTA could do would be to send somebody to watch what happens over a couple of days and start writing some tickets.

Or maybe we need Stanley Roberts on the job. Somebody get Stanley on the phone.

A man walking on an infamously troubled San Francisco street was robbed Monday afternoon, attacked by a mugger who crept up on his headphone-wearing prey. The 37-year-old victim was walking near Folsom Street

—
One Of Upper Market's Most Confusing Intersections To Be Improved, No Less Confusing
Share this