The name Mario Woods has become a rallying cry for local Black Lives Matter activists. A Bayview resident suspected in a stabbing who was shot and killed by police in December, Woods' death and the outrage it inspired in those who viewed video of it lead, in part, to the removal of police Chief Suhr.

Woods would have turned 27 this week, and a day of remembrance for him was proposed in January by the Board of Supervisors. While it passed unanimously, the resolution was met with resistance from groups like the Police Officers Association, who spread a petition for its repeal in February.

Similarly, today — the day designated for Woods — the Chronicle includes a full page ad paid for by the San Francisco, Oakland, and San Jose police unions, as well as the International Association of Fire fighters. The ad implicitly criticizes the day of remembrance and re-centers a narrative of police reform on the importance of police officers' lives.

“July 22, 2016, is a day to acknowledge San Francisco’s local heroes," reads that ad, which the Chronicle reveals cost the four groups $15,000. "It is a day to honor all of the brave men and women — as well as all public safety workers in California and this nation — who have made the ultimate sacrifice. On this day, pause and reflect on those selfless, dedicated individuals. It is they who are deserving of special civic remembrance.” 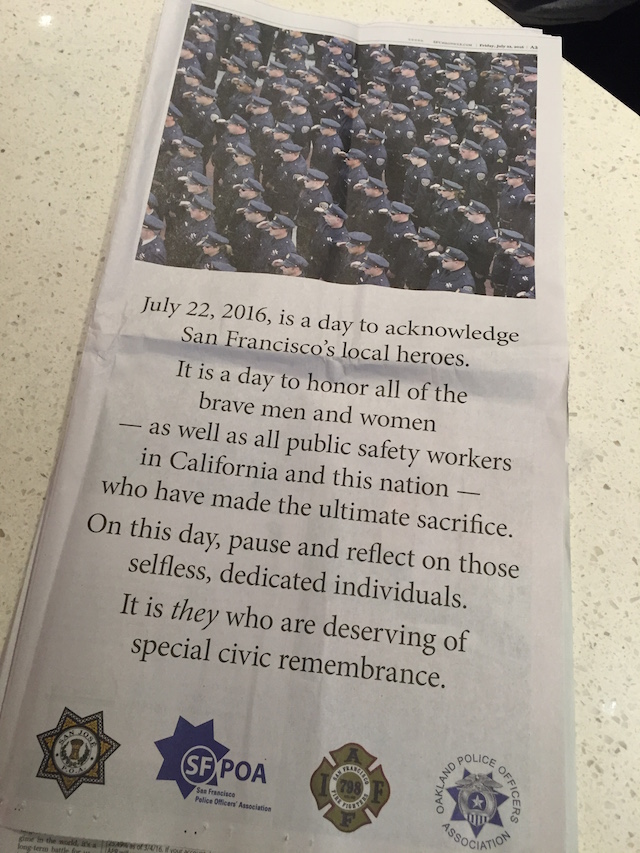 While the advertisement doesn't make mention of Mario Woods by name, its tenor is clear. Amid events organized by the Justice 4 Mario Woods Coalition, which are planned for today and tomorrow, the Police Union will hold its own events to honor officers killed in Dallas and elsewhere, the Examiner writes.

None of this should be altogether shocking, considering that former police officers' association head Gary Delagnes basically lost his mind over Mario Woods Day in January. "This is, without a doubt, the most disgusting, idiotic, and pathetic legislation I have ever seen in my 35 years of POA involvement," he wrote in a Facebook post at the time.

Directly underneath the bocce ball courts on the southern end of Justin Herman Plaza, at the foot of Market Street, there lay the remains of a large, three-masted ship called the Rome that

Another one of several splashy 2015 restaurant openings in the Mid-Market vicinity, Bon Marché, looks like it's not long for this world  as we predicted just a few weeks ago. The high profile,