Of the 20th Century painters who are most associated with California  Diebenkorn, Park, Hockney, Thiebauld  none created as bold, graphic, and ironic a style as Ed Ruscha (pronounced Roo-shay). He's most often tied to Los Angeles, where he began his art career, and images inspired by Southern California and the Southwest like the iconic "Standard Station" above and his dramatic sunset images of the Hollywood sign are what he's most known for. But his playfulness, particularly in his word paintings and his depictions of spare, sun-drenched landscapes, mark him as a true child of the West. Starting this weekend, the deYoung Museum is opening a new exhibit, on view through October, called Ed Ruscha and the Great American West, marking a significant new retrospective of Ruscha's work that includes pieces from 2015  Ruscha, at 78, continues to make art from his studio in California.

An early student of CalArts in L.A. before it was even called CalArts  it was called the Chouinard Art Institute up until a merger with the Los Angeles Conservatory of Music in 1961  Ruscha never felt like he fit with the contemporary style of his day, the abstract expressionism of Jackson Pollack, Franz Kline, and Cy Twombly that was starting to be taught in art schools. He recalled in an interview (quoted in this New Yorker profile), "They would say, 'Face the canvas and let it happen, follow your own gestures, let the painting create itself,'" but it was never something he felt comfortable with. At the age of 26, inspired by Jasper Johns painting words directly on canvases, he began a series of paintings that would become some of his most famous, takings Johns's stenciled and repeated words a step further toward pop art, printing huge, monosyllabic words that filled canvases like "Honk," "Won't," "Smash," and "Oof." 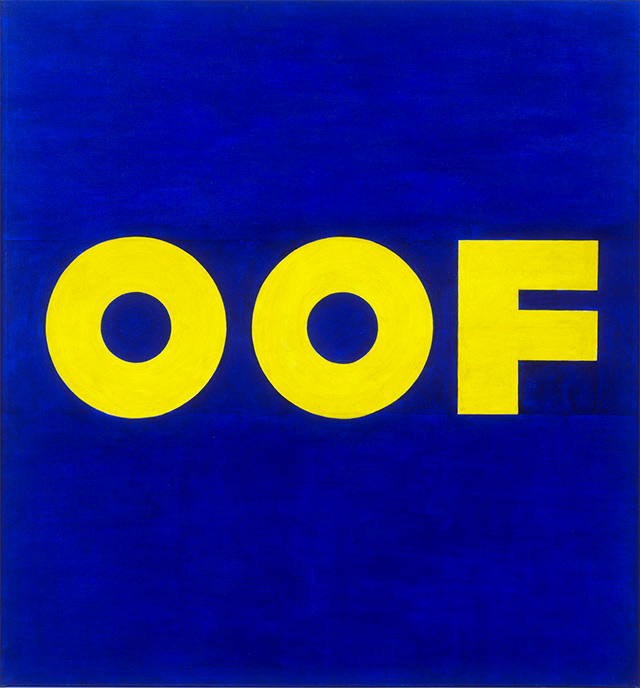 He said he chose the short words because they had "a certain comedic value." And with "Oof, he said, "It had one foot in the world of cartooning." "You get punched in the stomach, and that’s ‘Oof,'" he said. "It was so obvious, and so much a part of my growing up in the U.S.A. I felt like it was almost a patriotic word.”

Ruscha would go on to make many more word paintings, ultimately playing with whole phrases but always tinged with irony, and often borrowed from lines he's heard on TV or the radio. Art historians will tell you that Ruscha's word paintings are brilliant in the way that, like Warhol's Brillo boxes and soup cans, they treat the words themselves as objects and as visual and cultural constructs. “I like the idea of a word becoming a picture, almost leaving its body, then coming back and becoming a word again," he's said (again quoted in the New Yorker). "I see myself working with two things that don’t even ask to understand each other."

The deYoung exhibition includes a number of these word paintings, including the one below from 1983 that is part of the museum's permanent collection, and some in which a word is "depicted in a variety of forms that simulate poured liquids, cut ribbons, or spray paint." 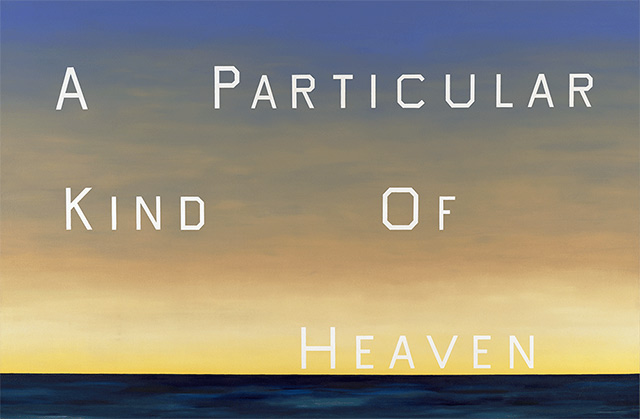 "A Particular Kind of Heaven," 1983. Courtesy of the deYoung Museum.

Ruscha, having once been a bad boy on the LA art scene, hasn't always taken kindly to the sanitized, institutionalized world of museums. He famously painted an image of the Los Angeles County Museum of Art, upon its opening in 1965, with huge flames and smoke pouring out of it. And the catalogue for his very first retrospective, which was done by SFMOMA in 1982, featured as its cover image a 1979 word drawing he'd done that read "I Don’t Want No Retro Spective."

But now, as he told the New Yorker three years ago at age 75, he's eager to have a career-capping retrospective of his work in New York. And this show, featuring 99 pieces that span his entire career, may be a stepping stone to that goal  as well as a great opportunity to experience the range of quirky, absurdist, distinctly Californian work by an artist who defies easy summations  and has always preferred it that way.

Ed Ruscha and the Great American West runs from July 16 to October 9 at the deYoung.

From the collection of the Museum of Modern Art

While San Francisco fights for queer spaces in the forms of bars and neighborhoods, some see a heightened need for a different kind of queer space: LGBT Writing. When Bloom folded, California was

Following a pitch by Google in May, the Unicode Consortium announced that it will add 11 new emoji to the world's smart phone keyboards. Google wrote about the decision today, noting that new