Sitting beside the Transbay Transit Center, 546 Howard Street's Parcel F is the last "super-tall" site zoned for development of greater than 550 feet. Anything that tall has the potential to radically alter San Francisco's skyline, and so it's well worth studying these first renderings from Socketsite that give us a glimpse of a 750-foot tower proposed for the site. It includes 250,000-425,000 square feet of office space (at its base), with 200-300 hotel rooms above that and 200 condo units above those.

The proposed structure won't be as tall as the nearby Salesforce Tower, which will be 1,070 feet, but it's also being designed by the same architects Pelli Clarke Pelli, who are behind the tower and the Transbay Center itself. However, for 546 Howard, Pelli's partner will be HKS, and that firm will receive credit for the structure. 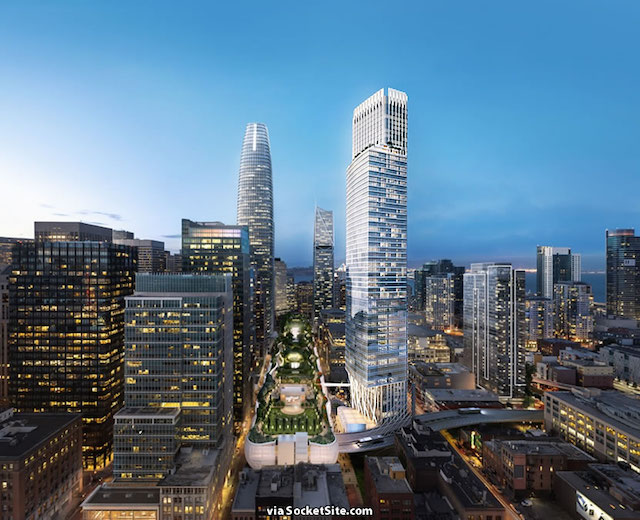 Socketsite makes a note that 546 Howard would be one of just three towers to connect to the park planned atop the Transbay Transit Center. That hub ran out of money (again) in April, and at some point it seems that the rooftop park will be selling its naming rights or paying for it with tax assessments from neighboring property owners.

Parcel F was sold for $160 million to a partnership between Urban Pacific Development LLC, Hines, and Goldman Sachs' Broad Street Principal Investments LLC. The Business Times, who reported the sale last month, called it a "key deal" as proceeds will help fund the Transbay Center itself.

Related: Guess What! The Transbay Terminal Project Has Run Out Of Money Again

Valets at Bohemian Grove, the ultra-elite private resort in the redwoods of Monte Rio owned by the Bohemian Club, just won a significant settlement from the 144-year-old private gentlemen's club. As the Chronicle

Why pay a human to do a job a robot can do for less? We learn today via Fusion that ride-hail company Uber has answered this question with a resounding "don't." The publication