Our beloved clubhouse. The iconic STUD SF. Day of reckoning.

Of all the iconic, legendary San Francisco institutions we've lost to the contemporary real estate boom, this one would have qualified as the most iconic and legendary loss. But after a Sunday night emergency meeting at which The Stud owner Michael McElhaney tearfully announced the possible closure of the 50-year-old SoMa bar, a community co-op is reportedly forming to purchase the club, with hopes of keeping SoMa's oldest gay bar alive and well (albeit possibly at a new location.)

The Stud is facing a 150% rent increase* effective September 1 after the building was sold to a commercial real estate developer for what Stud owner Michael McElhaney called “an insane amount of money." McElhaney broke the news at a grim Sunday night meeting at the bar attended by roughly 100 employees, promoters, performers (and SFist), the night before 4th Of July and just two weeks after the club had celebrated its 50th anniversary. (Efforts to confirm the name of the building's buyer were unsuccessful at publication time.)

“Throwing an anniversary and Pride with all that shit going down was really difficult,” McElhaney said, noting that the building was put into escrow to be sold on June 20 and, between the rent increase and health concerns for his mother, he is returning to his home state of Hawaii and relinquishing The Stud.

Within hours, The Stud community mobilized to form a co-op that has announced intentions to buy the bar and keep it intact, though possibly at a new location. According to
48 Hills , the co-op effort is spearheaded by Club Some hing host Mica Sigourney, better known as VivvyAnne ForeverMore!, and would gain ownership to The Stud's name, its very lucrative liquor license, and could move to a new location to avoid the rent increase. Update: That effort has now taken the form of a Facebook Group called SOS! Save Our Stud, and options will be discussed there.

Representatives from Supervisors David Campos and Jane Kim’s offices were also on hand at last night's meeting to discuss fast-tracking The Stud’s designation in the Legacy Business Registry Fund that would designate grant money for The Stud. An additional measure on this November’s ballot would require relocation assistance from new building owners to legacy businesses, further aiding efforts to keep The Stud intact.

In addition, bartender Brian Feagins offered to pay The Stud’s increased September rent of $9,480 (up from $3,800/mo), an offer that drew cheers from the assembled crowd and would potentially buy this effort one more month.

The Stud is not the oldest gay bar in San Francisco. That distinction belongs to The Tenderloin’s Gangway, which opened in 1961 and itself was threatened with closure earlier this year but still teeters along on short-term survival. But The Stud, established in 1966, is the oldest continuously operating South of Market gay bar, and the last remaining bar from Folsom Street “Miracle Mile” gay take-over of SoMa in the 60’s.

The Stud has cheated death before, most notably when in 1987, the bar's previous owners moved it to its present location from where it stood before, at what is now the Holy Cow. It was revived yet again when McElhaney bought the bar in 1996, and enjoyed a renaissance in the late 1990s with popular weeklies Trannyshack and Sugar, has been frequented by pop stars from Janis Joplin to Lady Gaga, and continues to host weekly parties like Club Some Thing, Meow Mix, and Go Bang.

“The Stud has always been a place of inclusion where you can fly your freak flag high. Crowds have been tripping on sounds there from psychedelic 60's rock to disco and punk of the 70's, to New Wave, house, industrial, acid and techno of the 80's and 90's to the present time,” Go Bang DJ Steve Fabus told SFist. 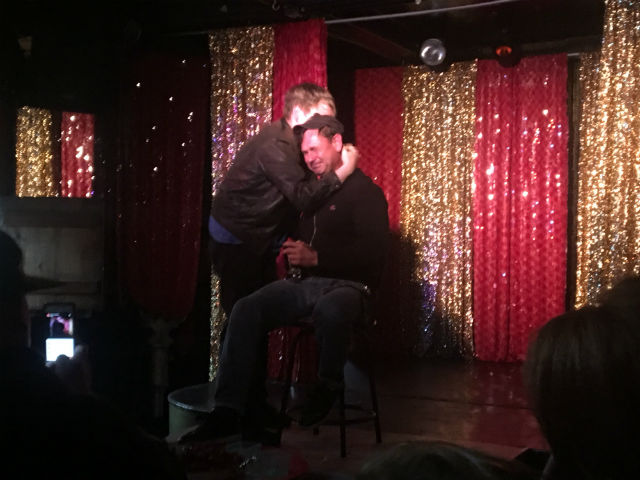 But The Stud will not survive without a new owner, someone willing the navigate the legendary club into yet another new incarnation. “This bar has never belonged to me. It has belonged to the community,” McElhaney told the crowd. That is truer now more than ever, as The Stud relies on a community intervention to save the club. Anyone wishing to get involved or supporting the co-op effort to purchase The Stud should contact [email protected]

Kevin Durant, the star small forward of the Oklahoma City Thunder, just announced that he'll be a Warrior come this fall. According to ESPN's NBA reporter Marc Stein, "Durant will sign a two-year