The SF Opera Summer Season concludes with three productions: a steamy Carmen by provocactive director Calixto Bieito, which we won't review but you can check for yourself for free tonight (Saturday) at 7:30 p.m. in a simulcast at AT&T Park. That production that comes with a parental advisory rating, for nudity and sexual situations and you have to register here to get a ticket; Leoš Janáček's Jenůfa and Verdi's Don Carlo.

Jenůfa: Janáček's Jenůfa depicts the life of a rather claustrophobic Moravian village at the end of the 19th century. Moravia, a part of the Czech Republic, was Janacek's birthplace, and he started to write Jenůfa in the 1890s, with a premiere in 1904. That apple didn't fall to far from the tree. It was only twenty years after the Italian premiere of Verdi's Don Carlo, also part of this summer season. And yet it's a piece of a different age and universe. 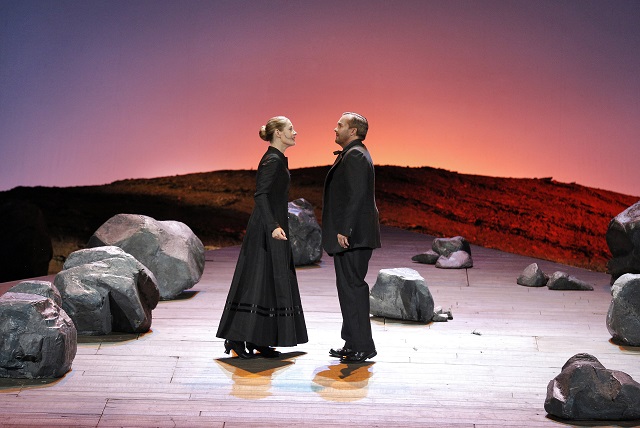 We can't really spoil Jenůfa's story, there is no big reveal at the end. Its middle act functions as the big climax. The piece builds up to it, and then down, with scenes between Jenufa and Laca for opening and closing bookends. In the first scene, Jenůfa pines for Steva to come back. When he eventually does, it's drunk and making fun of her. Laca's love for her is unrequited. Steva and Jenůfa are supposed to wed, but Jenůfa's stepmother, the Kostelnička, that is, the moral conscience of the village, won't let it happen until Steva stays sober for a year. Of course, Jenůfa is already pregnant from Steva. We then fast forward until Jenůfa, hidden for months from the village in Kostelnička's house, has given birth to little Steva. Steva Sr has moved on and intends to marry the mayor's daughter. Single moms are not looked at too kindly in Moravian backwaters, so Kostelnička comes up with a drastic quote-unquote solution: get rid of the baby while Jenůfa is sleeping. Her decision is the midpoint of the opera, the big dramatic scene. There are a couple aftershocks on the way out, but this is one of the most gripping, poignant scene in all opera, and the focal point of the opera.

Janacek's writes music lines that conform both to the rhythm of the spoken language, and the personality of his characters. At first, a dreamy Jenůfa gets melodic phrases, while Laca sings halted, stunted sentences. The music pushes the boundaries of tonality, in a post-romantic manner. Ironically enough, it's in that stunning middle scene that he serves a dominant-to-tonic resolution in the classical style, as if Kostelnička's decision was a reflection of some hidden harmony. 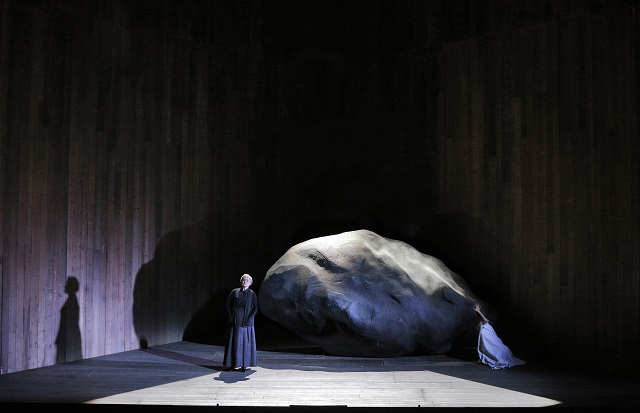 Karita Mattila in "Honey, I shrunk the sauna."
Janacek's inserts a lot of repeated notes, a rhythm within the rhythm of regular pulsations on the same pitch, an idea which starts with some knock-knock-knock in the percussions but then evolves into long extended pedal tones. He colors this with rich orchestrations, and it's a true pleasure to listen to maestro Belohlavek and the SF opera orchestra tease out the textures. They were superb throughout, and so were the singers.

Finnish soprano Karita Mattila, who has sung the role of Jenůfa in the past, had her role debut as Kostelnička in this production and seemed quite comfortable in it. She started dry and somber in the first Act, then revealed an otherworldly anguish in the second. In the third, as she confesses her crime, she holds one long note for what seems forever, and this one note is so steady and perfectly shaped, it is the abstracted ideal of a scream. As Jenůfa, Swedish soprano Malin Bystrom had a full and rounded tone, and William Burden's direct, honest tenor matched Laca's honorable character.

The sets, from the Hamburg State opera, and the direction by Olivier Tambosi match the early minimalism of Janacek's music: they are rather bare, with wooden planks for floor and walls, and rocks of different sizes for each act: one rock bursting through the floor in the floor, a giant rock slash elephant in the room in the second, and a bunch of smaller ones in the last. Rocks are metaphors for the weight of carrying a secret, or for the judgmental attitudes of villagers who will cast the first stone (as well as literally stone a criminal). They are explicitly mentioned in the lyrics. But in the second act, in a wooden room with a large stone in the middle, we couldn't help but think: what a nice sauna, won't someone throw water on the stone to steam it up a notch, and no wonder these two Scandinavian sopranos are so good, they must feel quite at home.

Don Carlo: where Jenůfa is intimate, and inward focused, Don Carlo, one of Verdi's latest and grandest operas, deals in superlative. The libretto follows Don Carlo, the son of Philip II of Spain, through love stories, political turmoil, religious implications and ethical struggles. The characters did exist in real life, but that's pretty much where it stops, they are only a pretext at royal intrigues and betrayals.

At the core is the very operatic struggle of a prince (Michael Fabiano as Don Carlo) in love with his young stepmom the queen Elisabetta. To his defense, they were supposed to marry at some point, before Carlo's dad swooped in. As in Tristan and Isolde, Carlo and Elisabetta stay pure, but Philip (Ferruccio Furlanetto on the night we saw it), tipped off the improper optics by the princess Eboli (Nadia Krasteva) still gets mad about it. Verdi adds a geopolitical dimension with Rodrigo, Carlo's best friend, standing up as a defender of Flanders, where an insurrection against Spanish rule was repressed in a bloodshed. But wait, there is more! A Grand Inquisitor pester the King to assert the Church's power over his. 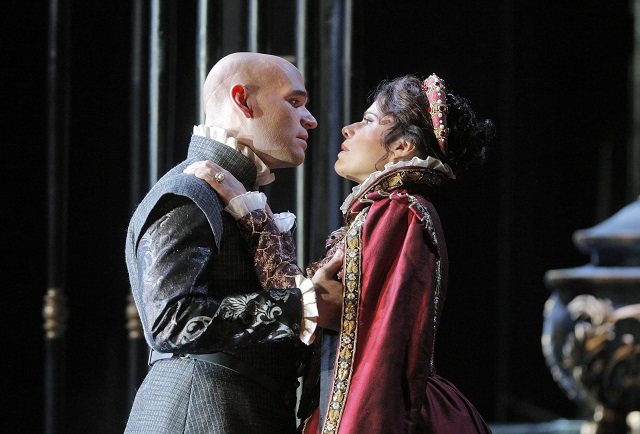 The staging takes full advantage of the pomp of the setting, with garish costumes with velvet and silk up the wazoo, and a decor of gilded iron works and conspicuous displays of royalty, or of the Church's power in the stunning auto-da-fe of Act III. Except in the King's study scene, where the staging shows how serious he is about his role, with maps, tools and architectural blueprints. Verdi really digs deeper in the psychology of all his characters, all with multiple allegiances to their love, their duties, and he takes his sweet time doing it: the opera clocks at four hours and a half.

The male voices were superb, in particular those of Furlanetto (a replacement for Rene Pape for one evening, and what a super-sub!) and baritone Mariusz Kwiecien, as Rodrigo. Tenor Michael Fabiano, whom we have admired since his debut in Lucrezia Borgia, was his excellent self. He seemed a bit more subdued that his usual incandescent. He acted with a weird mannerism, as if a bit uncomfortable in the character, touching his lip or face every so often and his voice seemed a bit tense. It may be a stage direction, as Don Carlo was supposed to be somewhat awkward. Oddly enough, he seemed more comfortable in the scenes with Rodrigo than with Elisabetta, as if Kwiecien's lyricism brought out the better out of him. Their Act II duet contrasted them beautifully. Furlanetto brought depth to the role, both with his bottomless voice, but also his characterization of a King struggling between his emotions as a father, husband, king and Catholic, in a tremendous Act IV aria. His duet with the Grand Inquisitor (the smokey Andrea Silvestrelli, a regular on this stage) and his quartet with Eboli, Rodrigo and Elisabetta were works of beauty.

Ana Maria Martinez, as Elisabetta, seemed a bit withdrawn, and again, it may be her part, of a conflicted Queen who accepts her fate but is depressed by it. Nadia Krasteva's Eboli had more fire, but Verdi wrote her as humorous in her opening Act II scene in the garden, and defiant in her Act III confrontation with Rodrigo and Carlo.

Nicola Luisotti, who will step down as music director for SF Opera at the end of the 2017-18 season, demonstrated again and again his mastery of the Italian repertoire. It must be a pleasure as a singer to be supported by him, you could see him breathing with his cast and giving them enough space. And we must acknowledge the wonderful chorus.

Four Adler fellows round up the cast, uniformly excellent, and we were happy to see Pene Pati as the Count Lerma. It is his debut on this stage, and he had delayed his joining the Adler program for a few years after an impressive Merola program in 2013. He didn't disappoint, albeit in a smaller role.

19-year-old Indian national Tarishi Jain, a student at UC Berkeley who had just finished her sophomore year at the school, was one of the dead in a brutal mass shooting and hostage situation