Maps of San Francisco can be very grounding. While so many aspects of this city may change — buildings rising and falling, people coming and going — the basic geography/cartography of our peninsula tends to stay consistent. Street names occasionally change — looking at you Cesar Chavez/Army — but maps, especially pretty ones, seem to celebrate the mostly solid foundation of our city.

That's the case with a set of typographic maps from the cartographers at Axis who have graciously included San Francisco among their map offerings of inferior metropoles like Boston, Chicago, London, New York City, Seattle and Washington DC. More towns are coming soon like Minneapolis and Madison, where Axis is based. 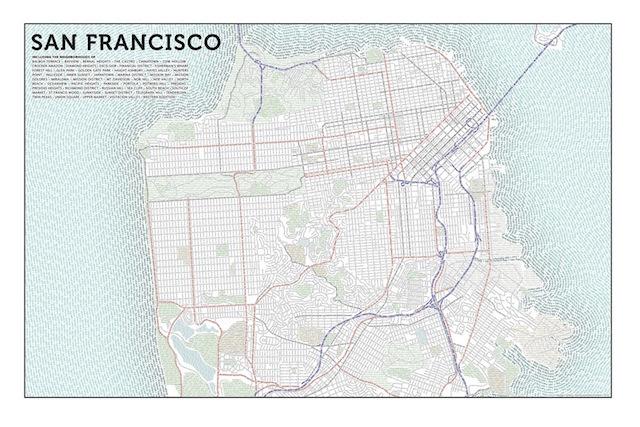 As the Axis Maps team writes, the project doesn't represent their typical work. "The typographic maps began as a fun side-project," they say, "something to work on between hours spent creating user interface mock-ups in Photoshop or writing HTML and Javascript code."

The series, where the largest highways are 12 pt font and the smallest roads and alleys are 6 pt (condensed), was a particular departure because "nothing was automated." Instead, they write, "Everything was laid out manually in Adobe Illustrator, from entering names over an OpenStreetMap image, to nudging text along curved paths to depict flowing water, to selectively erasing text to create a woven street pattern. Each city intentionally differs in style, but the end result is similar: From a distance it can appear as an accurate reference map, and as you get closer you notice the thousands of words it comprises." 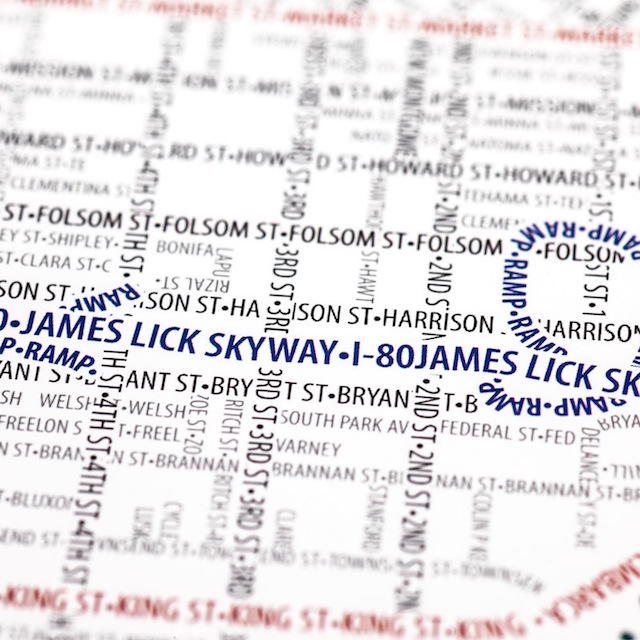 Sadly, the Axis San Francisco typographical map is sold out at the moment, so you might have to settle for your second choice city. And, a question: did they leave out LA because it would be too hard?

Related: A Look At The 'Best-Case Scenario' For 2050 Bay Area Transit

As city officials, residents, and popular culture endlessly debate the tech sector's multifaceted impact on the Bay Area, Adventures in Tech (with Pillow Talk on the Side), which opened last night at PianoFight,

Following news that SF Pride this year would feature security screenings to enter the Civic Center festival as well as an increased police presence in the wake of the shooting in Orlando, some