For all the droning on about how the ubiquitous little flying robots can pose a deadly threat to aircraft, knock out power stations, and enable jerkish behavior, it’s easy to forget that drones have great potential for entertainment, commerce, and serving the public good. A new permanent attraction coming to the Palace of Fine Arts Innovation Hangar seeks to create a more positive buzz by establishing “San Francisco's first sanctioned indoor flying space for drones”. A group of drone hobbyists called the Aerial Sports League (ASL) plans to open a combination racetrack, battle arena, sports bar and pro shop for their fellow drone enthusiasts, a facility described by Popular Science as a “modern Chuck E.Cheese for adults”. 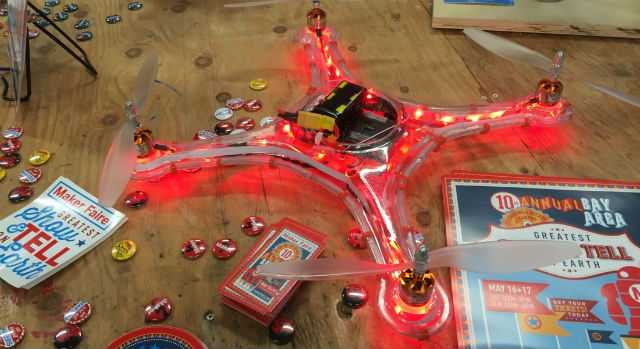 The drone sports complex is slated to open later this summer, but held a “Drink & Drones” party this past weekend with another preview event scheduled for July 16. “ASL is super excited to be launching the first comprehensive drone sports and entertainment destination in SF,” league founder and CEO Marque Cornblatt told SFist in an email. “We anticipate it’s only the first of multiple franchise locations.”

Drone racing represents nerd action at its finest, as we see in the above video showing the ASL’s Tron-inspired Darq Traq that was a big hit at last month’s Maker Faire. But there’ll be more than day-glo drone racing at the facility. “The space will serve several different parts of the drone community,” Cornblatt said, noting plans for education and STEM programs, drone sports bar and nightclub events, a drone ‘pro shop’, and of course a battle facility for drone combat leagues.

The facility will offer drone rentals but will also serve the ‘BYOD’ crowd. “We expect to serve many newbies with our tough-as-nails rental units, but we anticipate most experienced pilots will have their own drones and gear,” according to Cornblatt. “Our pro shop will only feature the best drones and equipment.”

That matters in BattleBot-style drone combat, seen in the ASL's "drone dogfighting" video above made all the more entertaining because an actual dog barks at and chases the dogfighting drone combatants.

As mentioned, booze will indeed be served at the drone track. “We don’t advocate inebriated drone piloting, so booze is for the audience to enjoy while watching the pros on the track,” Cornblatt said. “However, ASL has a remarkable history of training drone newbies at parties and corporate events, and have actually pioneered a fun and safe training game.”

“We suspect that some of our ‘students’ have been a bit tipsy,” Cornball added, noting that netted safety cages and ultra-light micro drones are employed to prevent drunken droning catastrophes.

A 59-year-old man was stabbed and robbed in the Tenderloin yesterday. [KRON 4] To hold its own against digital assistants from Google, Microsoft and Amazon, Siri needs an IQ boost. [CNet] Woman forced