As SF's rental market softens a little bit  don't get me wrong, people are still trying to get $13,500/mo for a three-bedroom like this  it's been slightly less easy to find the kind of pathetic, truly sad shares and apartments on offer that we saw throughout all of last year. But something tells me the Apartment Sadness column will never truly get retired. That is except in cases of zombie apocalypse or some nuclear or seismic catastrophe in which the city is rendered forever uninhabitable. Today, though, we take a look at something over in Oakland sent in by a tipster that is, well, pretty sad, especially in that it is a glorified bathroom to which someone has added a kitchenette and a place to sleep.

Behold this "Sunny furnished rooftop studio" that's billed as "small but gorgeous!" It's right in the heart of downtown Oakland, and looks to be walkable to both the 12th Street/City Center and Lake Merritt BART stations, and they've given the address (329A 14th Street), so here's the Google Streetview image. The ad says there's a Korean restaurant downstairs, but whenever this photo was taken it was a business called EM Deli & Catering  which may or may not be the same restaurant.

The unit was built onto the roof, and seems questionably legal in that regard. And if you see below, and try to stitch this perspective together with the image above, taken from the bathroom looking out, you begin to see that what you have here is a large bathroom that's been subdivided with a bookshelf. 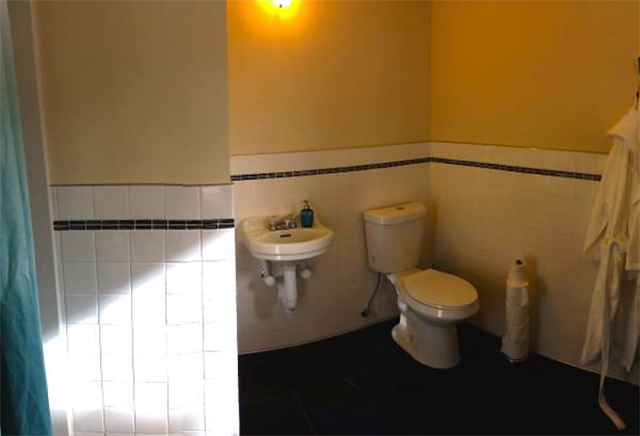 Here's the view across the "dining area", and you see the tile beginning right after the bookshelf. 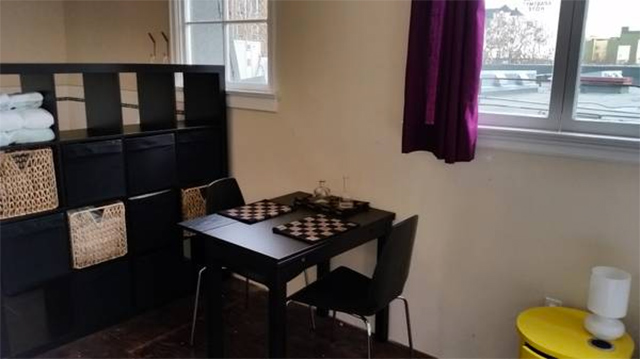 One wonders, given that someone went to the trouble to build this possibly illegal unit on this roof, why they wouldn't just put a wall between the bathroom and the living space, which is otherwise somewhat cozy  even if it only clocks in at 750 square feet, with what seems like 350 of that belonging to the bathroom. And yeah: stained plywood is your floor. 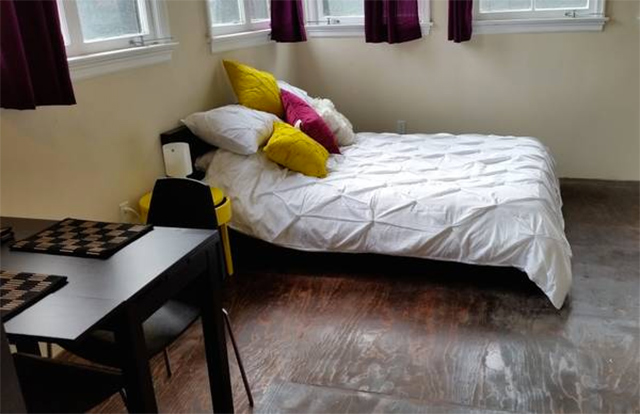 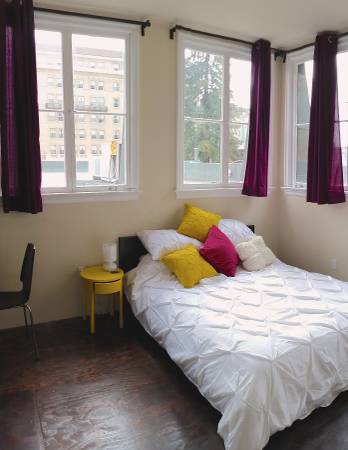 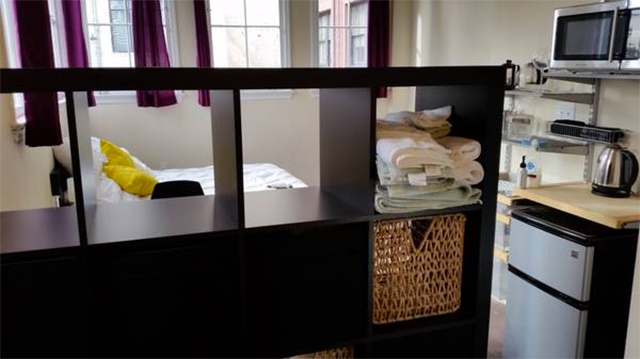 Below is the only photo of the "kitchen," which as you can see has no stove. Just a microwave, mini fridge, electric tea kettle, and what appear to be three tea pots. 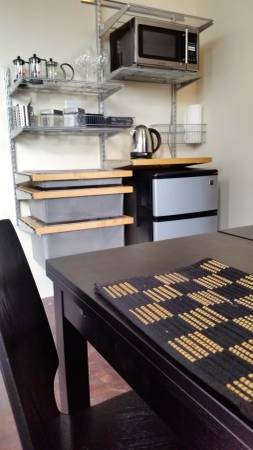 The unit's been on Craigslist now for 18 days, and presumably didn't find a taker. At $2000/month, this might be in line for other Oakland studios, but it's clearly overpriced for illegal studios with no door on the bathroom, no real kitchen, and upstairs from a Korean restaurant.

Perhaps the landlord will figure this out soon. Though they do say the restaurant is "yummy."

Also, did I mention that there's no roof access? Yeah. You are instructed to "stay inside," and there's no smoking out the window or anywhere. And no pets. And there are therapists' offices downstairs so you need to be really quiet during daytime hours.

Prospective tenants are warned that the place may not be suitable for "shy folks who need more privacy"  wait, does that mean they're thinking this will rent to a couple? Because no couple should have to endure pooping in front of each other no door with which to sequester the fumes.

No no. This is a one-person apartment, so shyness has nothing to do with it.

And, just a note: There are actually plenty of other studios in Oakland that are well under $2,000 that aren't this odd.

San Francisco is a step closer to enacting what the Chronicle estimates would be among the most stringent short-term rental regulation systems in the country. They report that the Board of Supervisors’ Government

As you can tell by the six pounds of glossy junk mail flyers arriving daily in your mailbox, there is a primary election underway with voting this Tuesday, June 7. The only significant,

—
Apartment Sadness: Live In A Bathroom Above A Korean Restaurant In Oakland For $2000/Mo
Share this