There aren't a lot of performers who can get up on a stage in front of 44,000, declare "I'm a star" and "I slay" and have not a single person try to say otherwise. Beyoncé Giselle Knowles-Carter is one of those performers, and with her Formation World Tour she has reached a new pinnacle in both her self-assurance and her popularity  while at the same time admitting some human defeat, and disappointment, with the personal songs at the heart of her new album Lemonade that suggest all is not well in the House of Carter.

Beyoncé has not significantly altered the set list on the tour since it kicked off in Miami on April 27, but opening with "Formation" had some special significance for the audience at Levi's Stadium Monday, what with all that tension around her Black Panthers-inspired performance at the Super Bowl three months ago  and her dancers showing solidarity with protesters of the police shooting of Mario Woods, and the video's reference to the Black Lives Matter movement. Taking the defiant, New Orleans-inflected number that Saturday Night Live satirically suggested was the first truly Black thing the pop singer has done, and putting it out in front of this otherwise pretty personal cycle of songs  not to mention naming the tour for it  shows that she wants to be seen as entering a new phase in her own formation as a performer. No longer "Drunk in Love," and no longer a single lady, but certainly not willing to suffer at the hands of others or accept defeat for long. 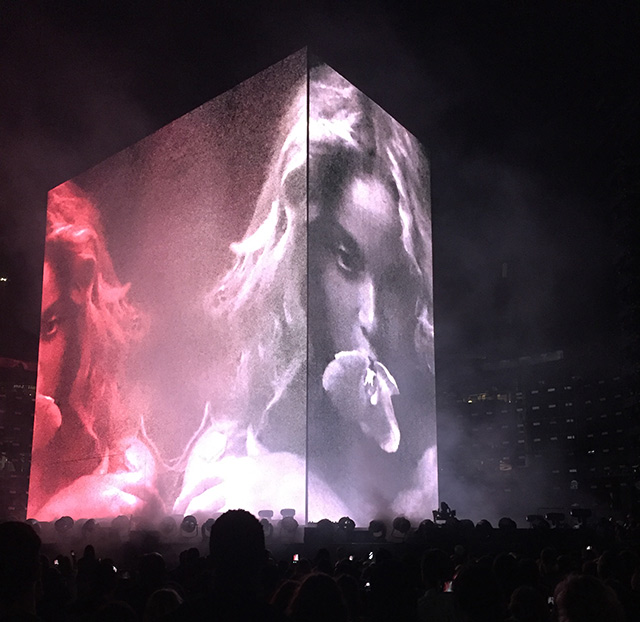 The production is as dazzling as everyone has come to expect from Beyoncé, complete with an all-female backup dance crew who march in formation alongside their queen down a long, L-shaped runway that extends out from the main stage. But this one, along with the heavier subject matter in new songs like "Sorry" and "Hold Up," brings real weight with it, starting with the monolithic, 60-foot LED cube that slowly rotates at the center of the stage and morphs into various set pieces, or cracks open to reveal an aerialist spinning and slowly descending behind the dancers.

"Single Ladies (Put a Ring On It)" was actually dropped from the set list since the tour began, a week after the death of Prince, and it's been replaced with a wrenching rendition of Prince's "The Beautiful Ones," with Beyoncé kneeling on the stage, alone. This segues into a recording of "Purple Rain" that plays with just a purple glow on the LEDs while a costume change happens, and thousands of fans in the stadium stands responded lighting up their cellphone flashlights, in loving memory. 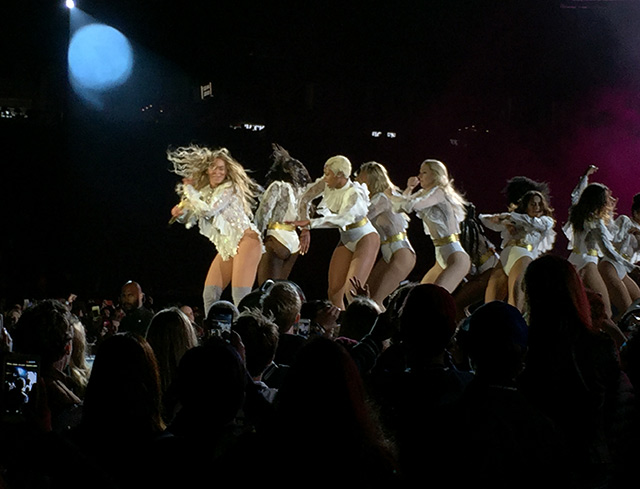 The show Monday night was at times as raw and real as some moments on Lemonade, as Beyoncé the diva allowed herself to be just Beyoncé Knowles-Carter the woman  especially during the Prince cover, and as she came out for a final group of songs that began with "Freedom," following a video montage of never-before-seen intimate home movies of herself with Jay-Z and Blue Ivy. And at no point does the strength or clarity of her voice falter, despite two long hours of strenuous dancing and belting.

The final group of songs, which also pointedly included Destiny's Child hit "Survivor," gets done as a kind of baptism as the entire front section of L-shaped runway gets magically flooded with a couple inches of water. Beyoncé and her dancer platoon march out barefoot this time and splash themselves, security guards, and the audience as they stomp and spin through this elemental final spectacle. Yes, there are a few fireworks and flames shot up above the stage at other points, and that LED monolith is impressive. But it's this final, joyous gesture that leaves the star herself drenched and laughing that perfectly caps off what will easily go down as a key turning point in Beyoncé's career. She's giving a lot of herself  everything she has, maybe  to keep earning the respect of her millions of fans, fellow divas included, and no one can walk away from a show like that believing they've seen anything less than royalty.

Look for a repeat performance, perhaps with some of the tweaks that come with a few more months on the road, when she returns to fill Levi's again on September 17. 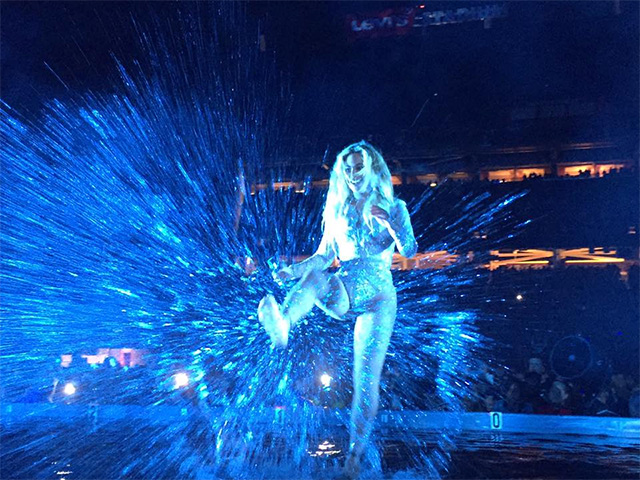 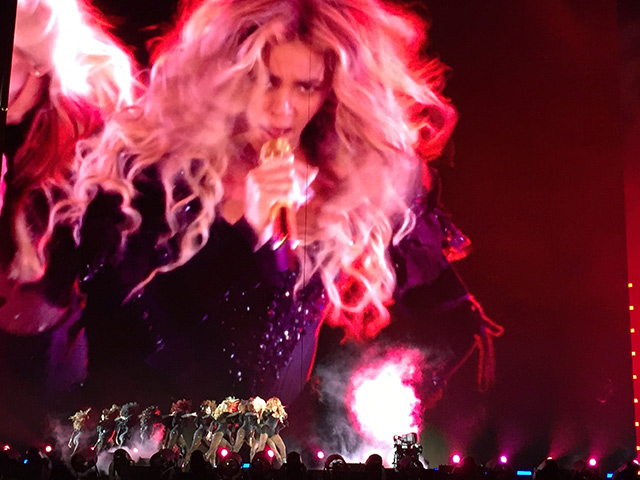 Last night’s game was that dream where all your teeth fall out. The Western Conference Finals was supposed to be between the two best teams in the NBA, the Warriors and the

—
Beyoncé Came, And Slayed, At Levi's Stadium
Share this