The Wachowskis are in San Francisco this week, once again filming new episodes of their Netflix show Sense8. This is not the sisters' first time shooting in SF, as they filmed parts of the show's first season in Dolores Park (among other Bay Area locations) last year. According to two Film SF posters, the production crew plans to be at The Castro Theatre from 7 a.m. until 10 p.m. on Wednesday, and the Women's building from 7 a.m. until 10 p.m. on Thursday.

These are at least the second and third locations in San Francisco that will show up in season two, with the Wachowskis shooting at the Westerfeld House last week. Of note, the production crew is requiring the use of numerous parking spots in both areas, and has pulled permits to have them reserved. Specifically, the production "will post 17 'No Parking' signs at Castro and Market Street and (24) signs in the back lot behind Castro Theatre." So fair warning if you're planning on parking in the area Wednesday.

According to a posted notice, the shoot at the Women's building requires sixty parking spaces.

The show involves eight characters who are all psychically linked in some way, and is shot all over the world. One of the characters, Nomi, is a trans woman living in San Francisco. The character is played by trans actress Jamie Clayton, who in 2015 shared her excitement about the role.

“I’m thrilled beyond words," she said in a panel discussion picked up by The Wrap. Clayton further noted that "there has never been a trans character in a movie or on a show before whose story didn’t revolve around the transition. Nomi is the first. She’s living her life, she has a job, she’s in love. No one cares, because at the end of the day, we shouldn’t care that she’s trans. She’s a human being.”

At this point in time there is no official premiere date for the show's second season. 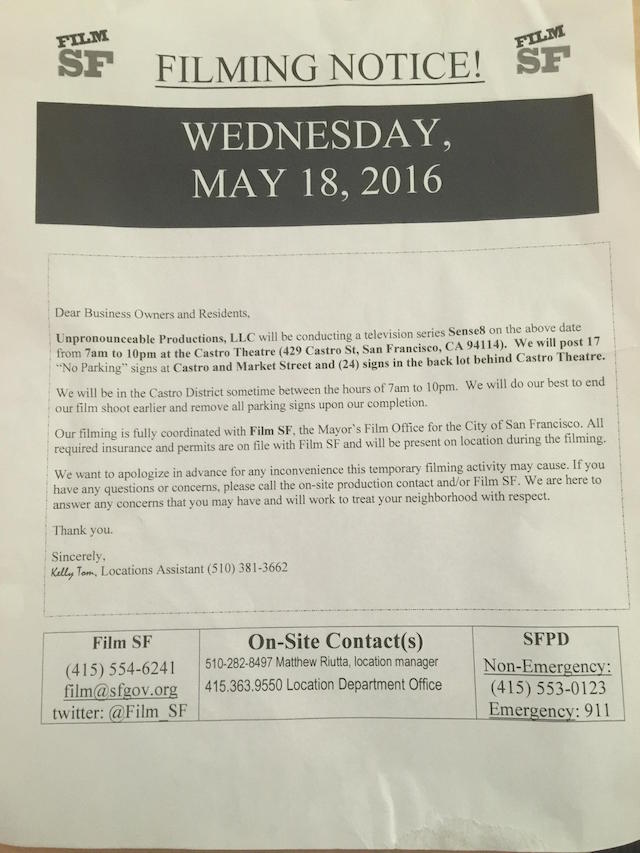 This post has been updated to note that filming will also take place at the Women's Building.

Previously: The Wachowskis Are In SF Filming New Season Of Sense8

Recently SFist wrote of a $27 million proposed agreement for drivers to settle with Lyft, a deal to keep them contractors rather than employees in California. That settlement was brokered by the same

There's barely a weekend between May and October where there isn't some kind of street festival happening in this festival-happy town, and add to that all the food and drink festivals that come