Correction: An earlier version of this post ran under the headline "Protesters Block Valencia Street After Chief Suhr Cuts Short Meeting." Chief Suhr did not attend the meeting, and the headline was inaccurate. SFist regrets the error.

"How do you spell racism?" a protestor shouted through a megaphone outside the Mission Police Station on Valencia last night at around 8 p.m.

"S-F-P-D" his fellows called out in response.

"How do you spell Murder?" he shouted back to the crowd.

This all happened on the site of an ongoing hunger strike with the stated goal of removing SFPD Chief Suhr which has, as of today, lasted a week. The strike, led in part by vocal Ed Lee critic and Bay Area rapper Ilych "Equipto" Sato, comes in response to the shooting of Luis Gongora, a homeless man, whom SFPD fired on and killed at 19th and Shotwell on April 7th.

That killing, along with the shootings of black and brown men like Mario Woods, whose death Mayor Lee described as "horrifying," and Amilcar Perez Lopez, who was shot in the back according to witnesses, has been a rallying cry for protestors alleging police misconduct. Their argument is heightened by a backdrop of revelations that more bigoted texts were sent between police officers. While a Department of Justice investigation into the San Francisco Police Department is ongoing, its focus will be broad, an evaluation of training and policy. 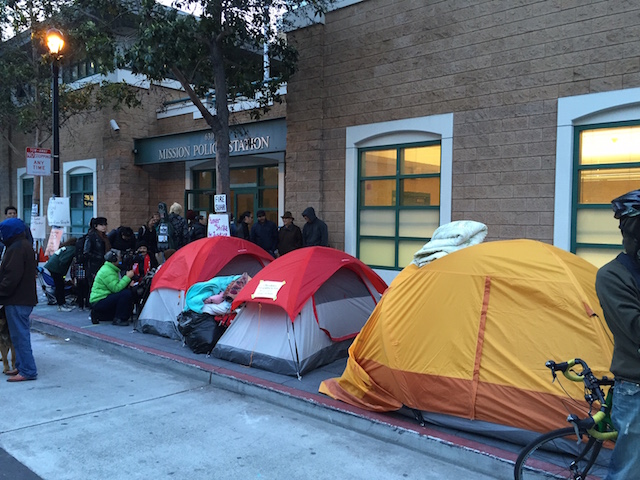 The rally Tuesday night, which closed two blocks as police set up barriers to traffic, was sparked by a monthly community meeting at the station that was concluded after just a few minutes according to Mission Local.

Initially, Edwin Lindo, a hunger striker and candidate for David Campos's supervisor seat, suggested the meeting be held outside to accommodate the massive turnout. When his request, which he clarified was a demand, was declined, the assembled protestors began to shout "Fire Chief Suhr." The police chief captain leading the proceedings said he could not continue the meeting over the shouting, and he departed as the meeting was disbanded.

“We are on the right side of history,” Lindo said outside the station, rallying protestors. He alleged that he's received personal words of encouragement in the hunger strike effort from current police officers whom he did not name.

Mission Local now puts the number of those engaged in the hunger strike at nine, and among them is Sato's mother, Maria Cristina Gutierrez, age 66.

"This has grown into something unbelievable,” Sato said to the paper. "Celebrate these small victories, because it’s not going to happen overnightYou see, I get it from my mama: We are not going anywhere.”

Hey, guys. It's spring! And while that can mean wind and occasional sprinkles, it can also mean fine, balmy, fog-free days and evenings that are made for outdoor drinking and eating. Below, our