One of the most useful innovations of the app era might not even be an app, but instead a converted big rig filled with sleeping pods. While California's high-speed rail construction won't be complete until we're all retired and Elon Musk’s proposed 760-mile per hour Hyperloop exists only as a tiny test track, a new startup called SleepBus is offering overnight bus trips from San Francisco to Los Angeles, with your own cozy sleeping pod, for an introductory price of $48 ($96 for the round trip). Having launched its first all-nighter bus trips last week, SleepBus offers non-stop service in a private pod bed with fresh linens (from Casper), an electrical outlet, free wi-fi, free coffee and tea, and room for as many as three bags and a bicycle. This sounds like the most perfect replacement for that tiring drive down I-5 or the schlepping to and from SFO and LAX, right?

There is one small problem. While the SleepBus system is indeed live and launched, any attempt at reserving a round trip from San Francisco to L.A. is met with the message “This SleepBus trip is coming soon, we will be emailing you when it is available!”. There is a phone number on the page, but its voice mailbox is full. I was however, able to book one-way trips from S.F. to L.A. on dates in May (April appears sold out). So this startup is moving somewhat fast and kind of breaking a few things. 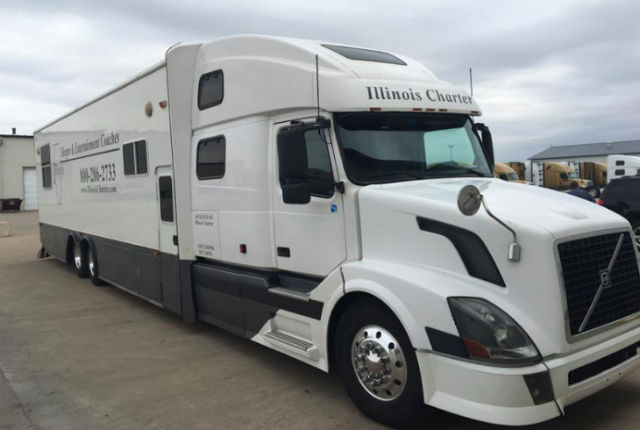 If and when you can book yourself a round trip, you’d ride in a luxury sleeping pod on the big rig seen above. The rig departs from near the Caltrain station at 11 p.m. sharp, then unloads at the Santa Monica Pier at roughly 5:30 or 6 a.m. the next morning (though you’re allowed to stay on and sleep until 7:30 a.m.). The reverse of this itinerary holds true for your return trip. The vessel is equipped with workstation tables that appear a notch nicer than the tables seen on the newer Caltrain trains, and yes there are restrooms on board.

That crazy-cheap $48 one-way trip is an introductory pilot price, and the price will go up to $65 according to a possibly sponsored article on SFGate. That means round trips will eventually cost around $130. That’s a substantially better price than offered by air travel, and a substantially nicer experience than a discount Greyhound bus. The combination of comfort and convenient timing that overlaps with normal sleep hours makes SleepBus an attractive option, should it ever start offering the promised round-trip service.

A sleeper pod bus is such a great idea, it’s a wonder no one’s thought of it yet. Except someone has. An Australian startup with almost the exact same name has raised nearly $85,000 on GoFundMe to provide sleeping pod buses intended to shelter the Australian homeless population. But the US version does address the legitimate California transit need of convenient and affordable trips from S.F. to L.A., and might do wonders to improve San Francisco’s contentious relationship with tech buses.

US politics are effed — this much we know. With crazy on the right, and discord on the left, the idea of someone, anyone, above the fray swooping in to make it all better