I knew going in that I was at the lower end of the demographic age bracket going to see Bonnie Raitt, and indeed the floor seats at the Fox on Saturday were well filled with people in their 50's, 60's and beyond, all coming to see the 66-year-old singer-songwriter who is neither all rock-and-roll, nor all country, nor all roots rock or blues, but is all of those things at once. And yes, it was a fully seated affair, no standing, and no bars were allowed to be open inside the venue during the show  Bonnie, as the story goes these days, prefers a hushed and intimate crowd, without the clacking of cocktail shakers or clanking of beer bottles.

That's not to say the crowd on Saturday night was quiet  they were reverently hushed when they needed to be, and nearly dead silent as a solo Bonnie took the stage for her first encore, the wrenching and amazing "I Can't Make You Love Me." But they roared with applause and shouts, gave at least three standing ovations (including one for her drawn out and deeply felt rendition of that very ballad), and generally celebrated what was a flawless and rocking performance by one of the music industry's most beloved elder stateswomen.

Raitt's last real crossover into the pop realm came in the early 1990's when songs and the videos for them like "Something To Talk About," "Thing Called Love," and "Have A Heart" were staples on MTV sandwiched between Red Hot Chili Peppers and Siouxie and the Banshees videos. But her latest album Dig In Deep has enough going for it that hopefully this tour will bring her some new fans, and maybe the mainstream media will stand up and take notice. Raitt even joked, noting for the audience that it had been 25 years since her album Luck of the Draw was released. "I hope to see you all again in another 25 years," she said. "Lord knows my hair will still look exactly like this."

As NPR put it in their February review of the album, for Raitt "musical and emotional intelligence are inextricably intertwined." And that was evident as ever on stage at the Fox, as Raitt added undeniable sexiness and wise nuance to INXS's "Need You Tonight," which she did as her opening number and is one of several notable covers on the new album. Another is the Los Lobos song "Shakin' Shakin' Shakes," a rollicking jam that lets her whole touring band loose on guitars and drums. Her voice, too, with a bit of a rasp when she speaks, sounds absolutely unchanged from two decades ago, and still has all the same power and infectious lilts in it that it always has.

Maybe the most moving rendition of her newest original material came with "I Knew," a down-beat song of regret that sounds at first (and in its studio recording) like a retread of her '90's material, but reveals itself in her live performance as a powerful, truly knowing pop ballad from an artist in the autumn of her years with enough wisdom and confidence to sing, almost contentedly, "Time, time ain't never healed a wound/ Can't think of anything that gets / any better because it's old." 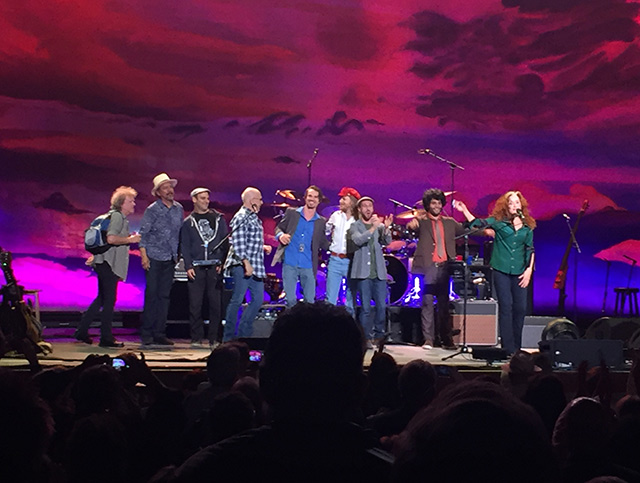 Raitt is a generous performer and came off with forceful but gentle energy as she and her band rocked and crooned their way through 21 songs, including four encores, closing with a phenomenal cover of Talking Heads' "Burning Down the House," and the bluesy number "Your Sweet and Shiny Eyes" from her 1975 album Homeplate. She was also generous in her endorsements of her opening act, The California Honeydrops, whom she mentioned at least four times during her set, saying they were her "favorite new band" anywhere, and bringing two of the band members on stage for one of her numbers as well.

She billed the Oakland show as a "hometown show," since she's called Marin County home for many years, and several members of her band were locals too. And this hometown Bay Area audience sounded as full of love for Bonnie as they could be. Given a phenomenal performance that proved Raitt is as much the performer in her mid-60's as she was in her 30's and 40's, who could blame them.

Bonnie Raitt returns to the Bay Area for another show later this year, at Berkeley's Greek Theater on September 24. Tickets here.

Raitt bringing the California Honeydrops on stage along with her band for some final applause. Photo: Jay Barmann/SFist

Leaving the courthouse last Friday, 33-year-old advertising technology mogul Gurbaksh "G" Chahal was surrounded by family and bodyguards, shielding his appearance from the eye of the media, as ABC 7 nonetheless reported. Also,

Legislation currently being considered before the state assembly would give certain judges the authority to fine jurors whose internet use puts the integrity of a trial in question. What's more, the Associated Press