Later! San Franpsycho's outpost at 505 Divisadero, the first brick and mortar retail location for the 2001-founded clothing makers, is shutting its doors as of this weekend. The store opened in 2012, and the company has decided not to renew its lease.

San Franpsycho indicates in an email to SFist that the decision wasn't made due to a rent hike or anything so un-chill. Instead, the company's owners will focus on its two other west-side retail locations, Sundays, an ice cream and coffee bar in the Inner Sunset at 1248 9th avenue between Lincoln and Irving, and a retail store at 3830 Noriega Street between 45th and 46th Avenues. 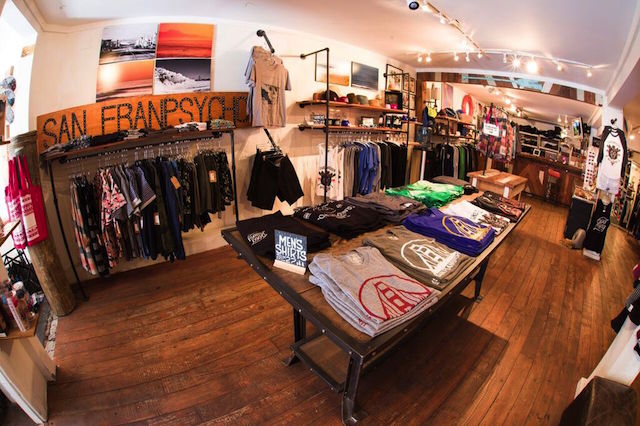 As a self-proclaimed lifestyle brand, San Franpsycho is recognizable for a hemmed-in grunge aesthetic, one big on logos and board sports. "It's bittersweet saying goodbye to Divis and our rad community, neighbors & memories (or lack thereof)," the store writes on a Facebook page devoted to its going away party. "[But] we're stoked to focus on bigger & better things as a company. We're closing this chapter but the hustle continues."

That party, by the way, goes down on Friday, on Divisadero, from 5 p.m. to 10 p.m. rain or shine. Expect music, food, and beer — and if you'd like, bring a blank clothing item and they'll screen print it for you.

It's 4/20, y'all, and while hopefully most of you have gotten over the novelty of getting high and won't be joining the throngs at the unsanctioned 4/20 smoke-in on Hippie Hill

Short as we mostly are on celebrity sightings here in NorCal, I thought I'd alert you to a couple that happened this week in local restaurants. First off, as we learned last month,

—
San Franpsycho Says Peace Out To Divisadero Store
Share this