Remember the infamous UC Davis pepper spray incident? How could you forget? The photographs and video depicting the brutal pepper spraying of peacefully gathered students captured a prime example of police overreach in the era of Occupy protests, and the actions of UC Davis police officer Lt. John Pike became the stuff of memes, prompted calls for the chancellor's resignation, and damaged the reputation of the school in the process.

Well, school officials decided the best thing to do about this would be to erase the incident from our collective memory (a.k.a. the internet). And so The Sacramento Bee reports that officials at the public university paid a private company at least $175,000 to scrub all stories of Pike and his pepper spray from Google searches, which you're probably guessing is an impossibility, and you'd be right.

"We have worked to ensure that the reputation of the university, which the chancellor [Linda P.B. Katehi] leads, is fairly portrayed,” says UC Davis spokeswoman Dana Topousis. “We wanted to promote and advance the important teaching, research and public service done by our students, faculty and staff, which is the core mission of our university.”

Needless to say, that plan has backfired.

The Sacramento Bee obtained documents detailing the expenditures after filing a request under the California Public Records Act. Apparently reeling from the worldwide negative publicity that followed the November 18, 2011 pepper spraying, the school in 2013 hired Nevins & Associates — a Maryland company that promised the “eradication of references to the pepper spray incident in search results on Google for the university and the Chancellor.” Subsequently, they also paid a firm called ID Media Partners to "design and execute a comprehensive search engine results management strategy." Now, as the Washington post notes, searches for "UC Davis" come up with mostly university-sponsored pages  that is until, the story of this web-scrubbing contract arose.

The money paid to these firms was in addition to the $30,000 the school eventually paid out to each of the pepper-sprayed students, and, gallingly, the $38,000 the school paid to officer Pike after he claimed he suffered "psychiatric injury" from the response to his actions.

News of the school's use of taxpayers' money to try and bury one (but not the only one) of its more shameful moments has sparked some outrage — and people are once again calling for the resignation of Chancellor Linda P.B. Katehi, reports the Bee, following the revelation that she accepted a paid board position with the for-profit DeVry Education Group.

"It is troubling that the administration chose to spend scarce public dollars and to nearly double its PR budget when tuition soared, course offerings were slashed and California resident students were being shut out,” said Assemblyman Kevin McCarty, who chairs the Assembly Budget Subcommittee on Education Finance. “These findings just raise more questions about university priorities.”

Indeed. In the meantime, in the spirit of helping to reinforce UC Davis's colorful Google footprint, we'll just leave this here. 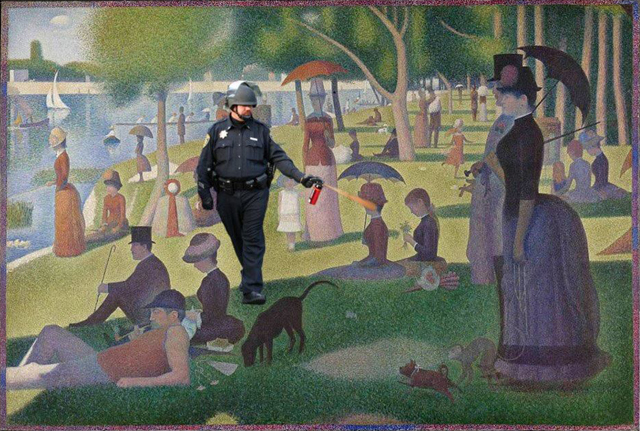 "A Sunday Afternoon on the Island of La Grande Jatte" altered by jockohomo.

An elderly San Francisco woman is in the hospital today, after she was brutally beaten when she tried to wake a woman sleeping outside her building. The San Francisco Police Department was summoned

Established in 2005, San Francisco Department of Health Food Security Task Force is "charged with the responsibility of creating a city-wide plan for addressing food security." Those goals got more specific in 2013,