A group of fifty of so individuals took to the street on Sunday to protest last Thursday's SFPD shooting death of homeless man Luis Gongora. Gathering at 18th and Dolores Street, the group marched eastward down 18th Street — blocking traffic in the process — until making a right turn on Valencia to compete for the attention of those gathered for the first Sunday Streets of the season.

"How do you spell murder? SFPD," the crowd called out as they marched and passed out fliers to motorists and confused and bemused onlookers. The group was rallied together by Cassandra Belson, who Mission Local reports as speaking to the gathered protesters before the march began.

“Justice has not been served countless times here in San Francisco,” she noted, alluding to past shooting deaths at the hands of the San Francisco Police Department. Police allege that Gongora charged them with a kitchen knife before they opened fire in self defense — a claim that numerous witnesses have come forward to dispute.

Those gathered also seemed incensed at actions taken late Saturday night by police and the department of public works to clear the Shotwell Street homeless encampment where Gongora lived and that was the site of the shooting. Video provided to the Examiner depicts dismantling one tent in the middle of the night and one witness claims to have seen police knocking over the makeshift memorial set up for Gongora. 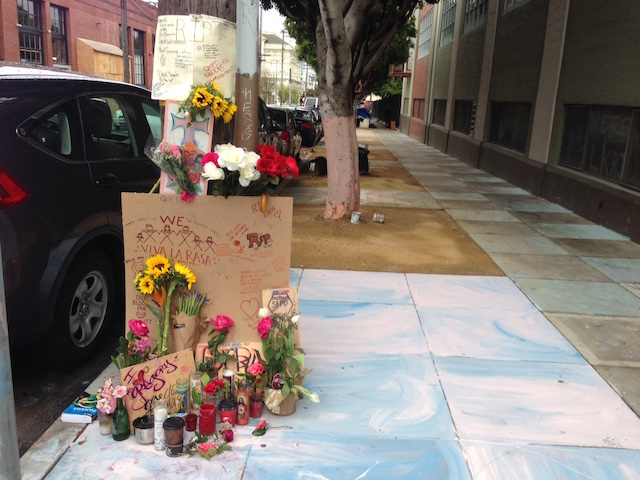 This camp was the first targeted in a renewed crackdown announced by Mayor Ed Lee over the weekend in which all remaining encampments will be similarly, systematically cleared for reasons of public safety.

The protesters marched south down Valencia Street all the way to 25th Street on Sunday before dispersing.

In a reaction that will surprise no one who has ever been or met a college-aged person, Stanford University students are expressing vigorous opposition to a proposal that seeks to curb on-campus alcohol

Archbishop of San Francisco Salvatore Cordileone and his predecessor, retired Cardinal William Levada, have a new conversation topic in addition to "being Archbishop of SF is so hard, what with all the pesky