Demolition is an odd movie that attempts to wrench emotions out of its audience, but left me feeling about as numb as its hero.

Jake Gyllenhaal stars as Davis Mitchell, your classic yuppie with a job on Wall Street, a stark, window-filled home, and a manscaped chest. When his wife suddenly dies in a car crash, (one that leaves him unscathed), Davis feels nothing. This disturbing lack of any kind of emotional reaction to his wife's death has him questioning his marriage and his life choices, and he ends up spilling his guts in a series of letters to the customer service department of a local vending machine company. (Yeah, it's a too-cute plot device.)

His letters have a dramatic affect on customer service rep Karen, (Naomi Watts). She's a single mother with a bit of a pot problem, as well as a teenage son (Judah Lewis) who's dealing with his own identity issues.

Karen and Davis eventually meet, and develop a flirty but platonic relationship. Davis soon finds himself living with the small and dysfunctional family, while he follows an impulsive need to tear things apart to "figure out how they work." This evolves into Davis literally demolishing everything in his life.

All three actors are solid. Gyllenhaal has the eyes to convey emptiness, that's for sure, and I especially liked Judah Lewis's often unnerving portrayal as the teenage Chris. But, ultimately, I wasn't really sure what the characters really learned about life, or themselves. Like much of Davis's demolition in the movie, it felt unfinished. And an unfinished demolition is really nothing but a big mess.

Star Melissa McCarthy created The Boss character of Michelle Darnell — "the 47th richest woman in the world," who's an impeccably groomed, but foul-mouthed entrepreneur — 15 years ago at the Groundlings. And it shows. The movie reeks of half-formed ideas that would be better left to a venue where you can applaud after ten minutes and hope the next sketch is an improvement. Instead, we've got 90 minutes of failing jokes centered on a character who's really hard to root for, even if she is given a backstory that's supposed to garner sympathy.

I've been a fan of McCarthy since her stint as Sookie on TV's Gilmore Girls, but she's had a hard time replicating the big-screen splash she made in Bridesmaids. Last year's Spy came closest, but this effort, directed by her husband Ben Falcone, comes closer to the duo's previous failed movie collaboration, Tammy.

Kristin Bell costars as Michelle's former assistant-turned-business partner, and aside from a bit involving boobs and bra straps, doesn't get much chance to exhibit her comedic chops. Peter Dinklage also makes an appearance as Michelle's nemesis (and former love interest). I will give the movie props for not relying on jokes centered on the sizes of either McCarthy or Dinklage, and McCarthy can definitely deliver a zinger and fall down a flight of stairs with aplomb. But, alas, a single character does not a funny movie make. 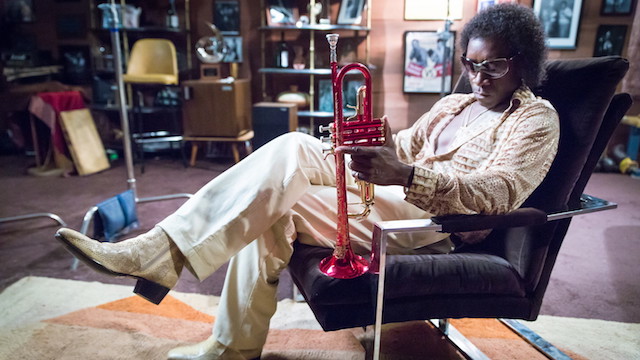 Don Cheadle makes his directorial debut with this Miles Davis biopic that he also co-wrote and stars in, (and he does an impressive impression of Davis's hoarse voice throughout). As a director, he chooses not to follow the standard biopic structure, (pre-fame; fame; fall; redemption), and instead focuses on two (heavily fictionalized) eras in the trumpeter's life.

When we meet Miles, it's the late 1970s, and he's basically been in hiding for a number of years, promising new recordings to his label, but never actually producing them. Ewan McGregor plays a Rolling Stone writer determined to get an interview, who ends up ensnared in a weekend of drugs, theft, and, yes, even a car chase.

The events of the two days are peppered with flashbacks to the 1950's, and Davis's rocky relationship with his first wife, dancer Frances Taylor, (Emayatzy Corinealdi). As the movie bounces back and forth in time, it begins to resemble the unpredictable and improvisational nature of jazz.

Don't come to Miles Ahead with the hopes of really learning about the legend's life. (And in fact, I imagine some people who've never heard of Miles Davis may be pretty confused by the movie's ending). Instead, like much of Miles's music, the movie is a slightly perplexing but pretty cool ride.

The long, extremely slow process of demolishing the old eastern span of the Bay Bridge continues this weekend with one more 504-foot truss section getting detached, lowered down to the water, and removed.

—
SFist At The Movies: Demolition, The Boss, Miles Ahead
Share this