For the last decade — more specifically, January 2006 through December 2015— take the number of affordable homes in San Francisco: Those that already existed, those that were rehabbed or acquired, and those that were recently approved for construction.

Subtract from that total figure the number of affordable homes lost in that time — terminated leases, no-fault evictions, and demolition, for a few examples of how that happens.

In the third such Planning Department report overall, the number,was 18 percent. That was with 10,000 affordable homes added, but with nearly half of that stock lost during the same timeframe, according to the Department's quietly-issued statement.

The result of the previous report, which evaluated the period from July 2005 through June 2015, was 15 percent. That means there's been an increase in affordable housing since then, but one the Examiner points to as "slight." Prior to that, for the period of 2005 through 2014, the balance was 21 percent.

We've got all these numbers because, in November 2014, voters endorsed Prop K, setting a non-binding goal of ensuring that 33 percent of units be affordable and requiring Planning to produce Housing Balance reports bi-annually. And, a quick reminder about who affordable housing is for: Technically, that would be "very low, low, moderate, and middle-income households." 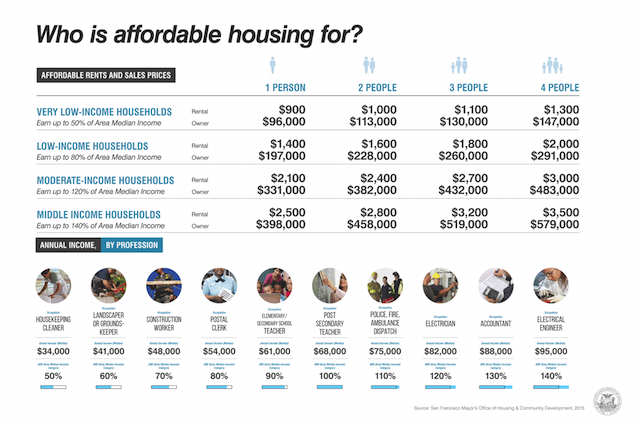 As it has done previously, the Housing Balance report breaks down its numbers by district, showing negative balances in the Richmond, the Marina, North Beach, Russian Hill, Nob Hill, the Sunset, Lake Merced, and the Excelsior.

As Peter Cohen and Fernando Martí, co-directors of the Council of Community Housing Organizations, wrote in the Examiner (though their numbers did not appear match those in the report or in the Examiner's other reporting), "the problem is not just about production — these Housing Balance Report numbers make clear how the loss of protected rental units completely undermines The City’s efforts to build more affordable housing."

A 56-year-old Tenderloin man is recovering today, after he was randomly stabbed by a man with a "very big sword," police say. According to the San Francisco Police Department, the man was standing

Californians are being told to be on the lookout for two potentially dangerous men who escaped custody at a Washington State mental hospital where both were being treated. As KRON 4 reports via