When the news broke that five giant light-up rabbits would be coming to San Francisco's Civic Center, there was discussion among the SFist staff on how long it would be before something vile happened to the bunnies. As the rabbits were erected Monday, numerous SFist commenters joined us in wondering when (not if) the installation would be vandalized — but according to reports, the bunnies will have a security team in place to make sure that doesn't happen.

"They'll be brown bunnies by the time it's over with, full of stab holes and/or stolen," SFist commenter TheJewsofSunset predicted, and he or she wasn't the only one. "This will not end well for the bunnies," Ima Gination warned, with Jennifer/The Yaoi Review replying "If they make it through tonight without one stabbing, I will be stunned."

Well, stunned you will be, Jennifer/The Yaoi Review! For it appears that the City of San Francisco saw the evil that existed in all our hearts, and has taken steps to thwart it. According to CBS 5, "To prevent the kind of vandalism that Super Bowl 50 artwork was targeted with, the bunnies will get 24-hour security from now until the exhibit ends on April 25th."

So, miscreants, choose another target! (Which shouldn't be hard, since most of the city isn't under round-the-clock protection.) Or, better yet, find something productive to do with your time. 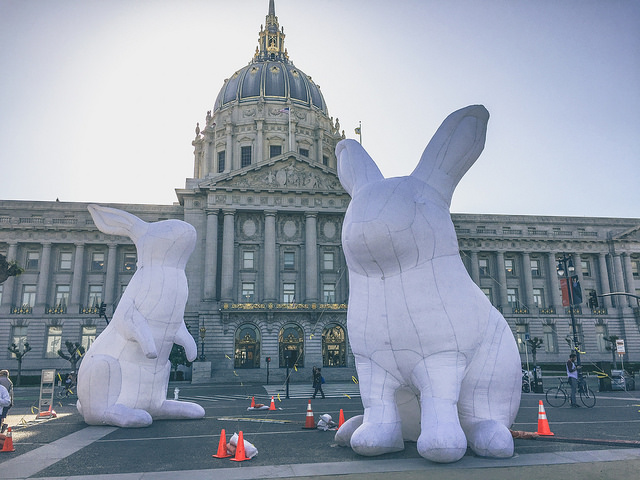 Facebook yesterday announced a new service designed to assist the millions of visually impaired people who use one of its many products on a daily basis. Called automatic alternative text, according to the

The economical young gentleman who relegated himself to a wooden "pod" in an Outer Sunset living room, making national headlines for, like, symbolizing the San Francisco housing market, would now like to capitalize