Thursday night’s opening of Twisted Cabaret at the Great Star Theater contained a circus trick so graphic and repulsive that even Tourettes Without Regrets host Jamie DeWolf ran from his second-row seat averting his eyes from the proceedings onstage. A manic, circus geek-inspired cabaret show (running this weekend and next), Twisted Cabaret is part juggling act, part sword-swallowing act, part magic act, part unicycle act, part drag queen act, and all well-executed, consistently funny mayhem. The show is a pastiche of daring and comical old-school circus stunts performed onstage to the live music of a cabaret band. But as the modifier “Twisted” in the title of the show indicates, some of the gags in Twisted Cabaret are specifically designed to make you gag. 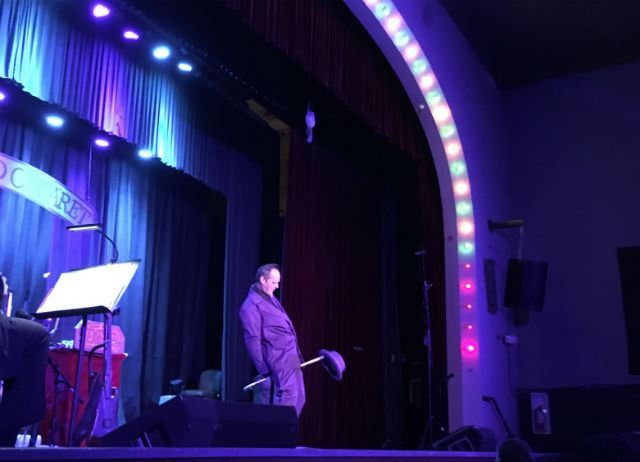 The picture above is one of the few safe-for-work images from the show that can properly encapsulate the blue-humor Vaudeville ethic of Twisted Cabaret. Yes, feature performer Frank Olivier is making an obvious dick joke with the help of a hook cane. But this same gag also employs an impressive array of acrobatic maneuvers wherein Olivier does dexterous hat tricks without using his hands and instead uses the phallic cane to carry out the feats. The show employs almost exclusively lowbrow humor, but bolsters this humor with a dazzling set of physical stunts, sleight of hand tricks, and ninja-level legerdemain.

Twisted Cabaret is billed as a one-man show, with Olivier “forced” to perform numerous different acts because the scheduled cast supposedly can not make it to the theater on time. This is, of course, a fictional plot device. Olivier is not the only performer, as the show features several appearances by Dark Kabaret emcee and magician Paul Nathan. But Frank Olivier is the driving force of the show, remaking himself into different characters with costume changes that often take less than two seconds. 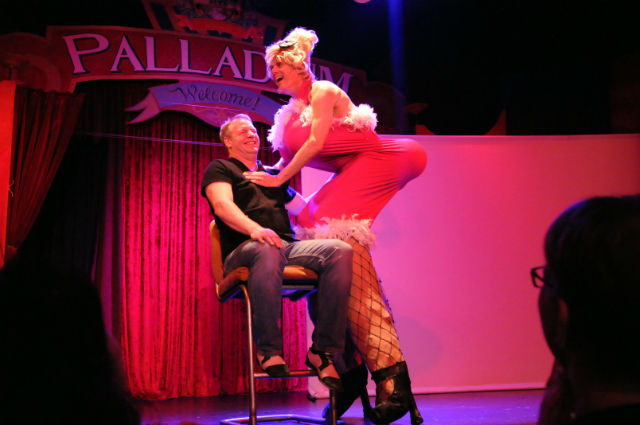 Twisted Cabaret relies on audience discomfort for much of its squirm-inducing hilarity. Not only is there gross-out humor galore in the show, audience members are often cajoled onstage to help Olivier execute his tricks. (“Have you ever been Tased before?”, Olivier asked one such audience victim forced to help with a taser-juggling stunt). If you are mortified at the thought of being pulled onstage in a live show, you might want to choose seating as far from the stage as possible.

Indeed, Twisted Cabaret is not for the squeamish. Injuries and bloodshed are depicted onstage in gags gone “wrong”. There is tongue-trick segment that is good natured, but not particularly easy to watch. Olivier has a mind-blowing nostril gag performed with dental floss and an animal balloon that will leave your brain with a searing mental image you might never be able to forget.

Olivier has been doing Twisted Cabaret for more than 15 years, and some of the gags have a little tread on the tires. There is Monica Lewinsky joke that probably played better last century. An Indian-accent gag does not play well with today’s audience sensibilities. But Frank Olivier has been doing this show long enough that he can always improv something very funny when a joke falls flat, when technical difficulties pop up, or when an item he’s juggling flies off target. The show flows very smoothly, even in its most shocking and mortifying moments. Frank Olivier’s Twisted Cabaret is that rare theatrical accomplishment that is so bawdy and outrageous that it could merit an NC-17 rating, even though it depicts no nudity or sex.

Frank Olivier’s Twisted Cabaret runs Saturday, March 19 at 8 p.m. with a 2 p.m. matinee Sunday, March 20, and continues next weekend (March 24-26) with 8 p.m. shows. All performances are at the Great Star Theater (636 Jackson Street at Kearny Street), with tickets available online.

San Francisco Police Department's Park Station busted a driver with a car full of weed on Friday during a "Vision Zero" operation. In the middle of their new pedestrian safety stings — a project