It's happening, everyone. BART's spiffy, modern new rail cars are actually hitting the assembly line in upstate New York, and the very first one was just loaded up onto a flatbed truck to make its journey to the Bay Area for testing. The video above was provided to BART by the Bombardier Transit Company in Plattsburgh, New York showing the first car leaving the assembly plant and beginning its trip  seemingly about three months late, since we'd heard December as the target date, as of last October.

If you've lived in the Bay Area even just a couple years, you've seen the renderings and the prototypes and heard about all the improvements that will be included in BART's "Fleet of the Future" of new train cars for a long, long time now. Plans, community input, and designs go back over a half decade now, some of the first renderings started popping up in early 2012  at which point we were promised these first test cars in 2015, but again I digress.

As BART's rail vehicle capital program group manager John Garnham explained last June, many subsystem and materials tests have already gone into getting things just right on this very first rail car coming off the line. "The first one is the most difficult," Garnham said. "That's where you iron out all the problems. It's imperative that we get the first one done correctly."

The construction of these trains is an international affair. The shell bodies of the cars are being fabricated in Mexico, the seats in Indiana, doors made in China, and car body compression testing in Canada. Then it all comes to get assembled at Bombardier in New York, with a total, approximate price tag of $2.5 billion.

As BART announced in a press release Monday, this first car will arrive soon at BART's testing facility in Hayward, following its wintry cross-country trek, where after rigorous testing is complete it will be joined by nine more cars this year to complete the first gleaming, new, 10-car test train, hopefully by December 2016.

Train car number 3001 was carefully strapped to a flatbed truck last week before departing for its 3600 mile road trip home to the Bay Area. Bombardier Transit Corporation is building BART's Fleet of the Future and provided this video showing the 70-foot-long, 10-foot-6-inches tall, 65,500 pound train car pulling out of its factory and taking off on snow-covered East Coast roads. Car 3001 is a “cab car,” which means it leads the train with room for a train operator. The face of the car has a more modern feel than our current old cars, but still manages to keep BART’s iconic look.

Once all systems are go, the assembly line gets cranked up and 54 more cars get delivered in 2017, with ultimately the entire fleet of BART's train system getting replaced with 775 new train cars by 2021. BART hopes to find funding to bring that number to 1,081, which would mark a 49 percent increase in the size of the currently overcrowded fleet of 669 cars.

The good news is that actual Bay Area humans will get to ride on one of these cool new trains sometime next year, and slowly you will see more of them roll into your station by surprise, and you'll get to ooh and ahh over their new features.

The biggest improvements you'll see are extra doors for boarding (three on each side instead of two), more standing room; modular (wipeable) seating so that even more standing room could be created on certain trains in the future; bike racks near certain doors which you can see rendered below; digital screens indicating destinations, inside the train; and better air conditioning, less noise inside, and more. Full details and floor plans here. 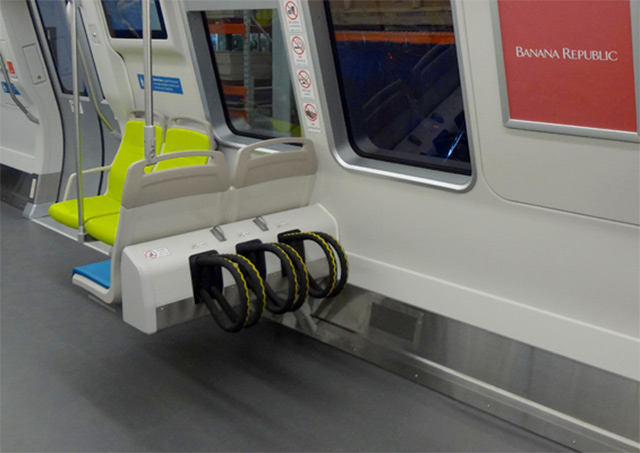 On-demand meal delivery service SpoonRocket announced today that it is shutting down, effective immediately. The Berkeley-based company, reports TechCrunch, was unable to secure additional funding and when a last-ditch effort at negotiating an