Though Fuller House debuted just this past Friday (when SFist recapped the premiere), by now some masochist-type fans of the original show have likely binged on all 13 new episodes. The autoplay feature comes in handy here: True (to a fault) to its predecessor, Fuller House relies on familiarity and predictability — catch phrases punctuated by laugh-track accompaniment — to keep viewers not rapt but passive. Besides a dull headache, those who watch the new offerings will likely be left with a lot of questions.

In a golden era of on-demand delights, why resurrect a network sitcom that relied on broad, bland mass appeal? Hollywood has been in the reboot habit for some time, making safe bets on built-in audiences gratified by wish fulfillment. But why should Netflix — an internet TV channel that helped drive the on-demand content revolution — emulate the studios? The result in Fuller House is that Netflix comes off as less dream-genie and more necromancer. Animated by brief bouts of humor and cameos from a ghastly original cast  Danny (Bob Saget), Uncle Joey (Dave Coulier), and of course a perfectly mummified Uncle Jesse (John Stamos) who all seem to pop out of the walls like animatronic Disney-ride versions of themselves  Fuller House is empty, sad, and haunted. Anyway, for those who would like a quick recap to save themselves some actual viewing time, here's what happens in the course of the season.

Episode 2: “Moving Day”
With Danny Tanner, Joey Gladstone, and Jesse Katsopolis headed out of the house, bound for Los Angeles and Las Vegas, DJ (Candace Cameron Bure) is heir to the eponymous San Francisco house where, widowed, she's raising her three children with the help of sister Stephanie Tanner (Jodie Sweetin) and neighbor Kimmy Gibbler (Andrea Barber). DJ is now a veterinarian with her deceased husband's last name, Fuller (get it?), Stephanie is a DJ, and Kimmy is a party planner with a teenaged child of her own, Ramona, from an ex-husband and latino caricature named Fernando. This episode is devoted to tours of the house and fights among the kids about who gets what room. Unsatisfied, DJ's eldest, Jackson, stows away in Jesse's car and is discovered and brought home.

Episode 3: “Funner House”
A girls' night out becomes a Dirty Dancing tribute for Kimmy to show off her Dancing with the Stars chops. The women make "on fleek" jokes. Macy Gray, understandably disinterested, cameos in the club. At home, (Great-) Uncle Joey babysits with Nerf guns. Max, DJ's middle son, delivers his catchphrase, which I suspect is corporate sponsored: "Holy Chalupa!" This is not a joke. 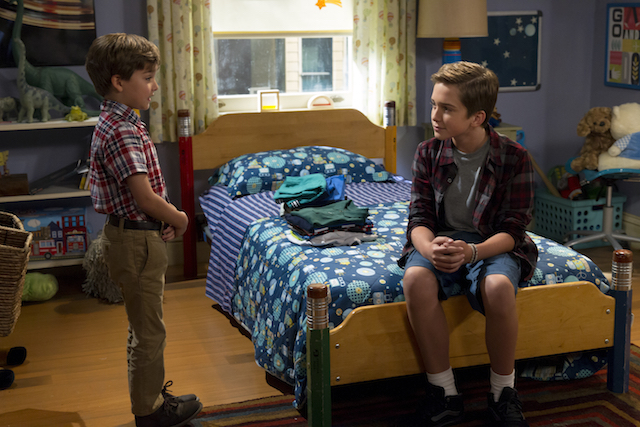 Episode 4: “The Not-So-Great Escape”
Jackson and Ramona attempt a friendship and try to escape science class by blowing up their experiment. They're suspended. DJ leaves her veterinary practice to deal with that while Stephanie, who has been flirting with a man in a coffee shop who thinks she is a single mother of DJ's youngest (Tommy), holds down the fort. A skunk gets into the practice. Nothing bad can possibly really happen in this show and everything is fine and they choose a puppy to keep for the family. They name him Cosmo.

Episode 5: “Mad Max”
Stephanie's friend on the music circuit shows up to take her to Coachella. There, she fills in on the main stage, but she ends up broadcasting Max from San Francisco at Harvey Milk Day school playing on his trumpet in order to boost his confidence before a recital. Stephanie decides to pass up a trip to Italy to be with the family, and tearfully confides in unspecific terms to DJ that she can't have children.

Episode 6: “The Legend of El Explosivo”
Jackson is a bad child and continues to get in trouble for doing Jackass-style stunts with his unsupervised friends. He's grounded while everyone else goes to a Mexican wrestling show where Stephanie DJ's and Kimmy joins her daughter Ramona's dance squad to perform. Jackson sneaks in and somehow everyone ends up in the ring. Wild.

Episode 7: “Ramona’s Not-So-Epic Party”
Ramona's 13th birthday sets the scene for a party to reunite her parents, Kimmy and Fernando. A power outage recalls a former Full House episode. Steve, Steph's high school friend, is after her but she seems interested in her veterinary partner's son.

Episode 8: “Secrets, Lies, and Firetrucks”
Danny is back in town to film a Wake Up, San Francisco reunion episode (ahahah "Aren't reunions sad?" someone says, and yep). Cosmo tears into the couch and Jackson teaches Max how to lie about it. Max takes to lying, and says that since his late father was a firefighter he can ride in a firetruck whenever he pleases. The wish/lie becomes the truth thanks to Danny's help. 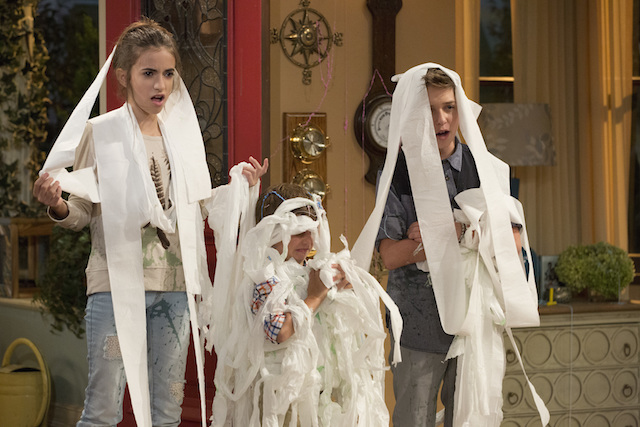 Episode 9: “War of the Roses”
The living room is covered in roses when Becky is in town, but no one knows who left them for whom. Could they be for DJ from Steve or the veterinarians son Matt? From Fernando to Kimmy? They're actually from Jesse to Becky and serve as proof their romance is alive.

Episode 10: “A Giant Leap”
Uh... so, Stephanie is now dating Hunter Pence of the San Francisco Giants, and the gang goes to a ballgame, naturally. Unfortunately, she breaks up with Pence in front of the whole crowd because they've blamed her for his slump. Meanwhile, Steve sees DJ making out with Matt on the kiss cam — drama!

Episode 11: “Partnerships in the Night”
Jackson and Ramona try to watch an R-rated movie on DJ's laptop. Lesson for the kids: It gets a virus. Matt's dad the vet is retiring, but Matt and DJ decided to go into business together because, wouldn't you know he's a vet too and has been helping out at the clinic (that's how they met).

Episode 12: “Save the Dates”
Pandering to a presumed female audience, comparisons to The Bachelorette abound from her to the end of the season. Steve and DJ go on a date. Fernando takes Kimmy on a scavenger hunt and, since he's signed his divorce papers, naturally proposes to her again, which she accepts.

Episode 13: “Love is in the Air”
To renew their vows, Jesse and Becky return to San Francisco for a ceremony officiated by Joey. Kimmy decides to piggyback with her own vows to Fernando. Both Matt and Steve arrive to be DJ's date, but in the end, in high Bachelorette fashion with a rose, she chooses herself, vowing to keep them both in her life but noting that she isn't ready to see either one exclusively yet.

Most of you probably know that the earth's orbit around the sun takes 365 and a quarter days, thus necessitating this extra day in February called Leap Day, every four years. It's kind

Castro-area Muni riders were hit with a disturbing message Monday morning, when they were confronted with fliers depicting a burning Pride flag as they passed through two area stations. According to SFist tipster