Like a contemporary cable car, the corporate tech shuttle — a symbol of San Francisco but with slightly different connotations — has again been preserved. The Chronicle reports that a political deal was finalized to avoid an environmental appeal that would possibly have interrupted the buses that ferry thousands of reverse commuters between San Francisco and Silicon Valley.

A pilot program for the shuttles became permanent last November, but in December, Service Employees International Union Local 1021 had threatened to insist on just such an environmental appeal, along with a group called The Coalition for Fair, Legal and Environmental Transit. Their request was withdrawn on Monday after Supervisors David Campos, Norman Yee and London Breed struck the deal.

The terms: The current number of shuttle stops in San Francisco, 125, can't be exceeded, and if it is, that will trigger an environmental review. Also, the Municipal Transportation Agency and the San Francisco County Transportation Authority must perform a study that weighs transforming the program to a hub model with just a few main stops.

But for now, shuttles can continue their business as usual — which looks like this on Haight street according to one tipster. 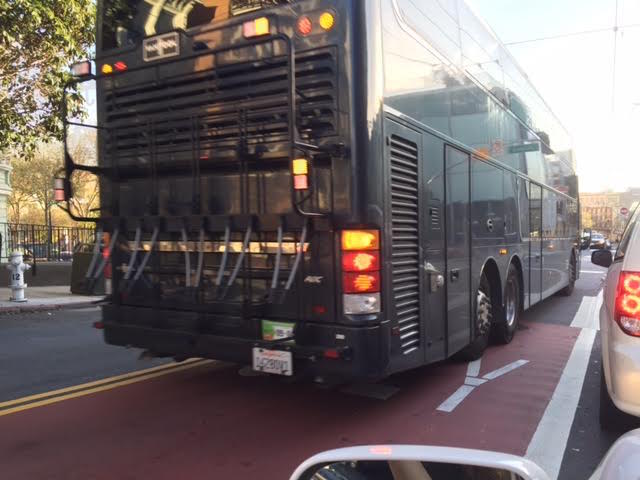 Better be careful, or one of these buses could get skewered by a Muni antennae again.

In yet another sign of the times, a very well loved and financially stable neighborhood coffeeshop, Bean There at the corner of Waller and Steiner, is now gone for good. As owners Susi

There's been another cinematic coup for Alamo Drafthouse Cinema, newly open at Mission and 21st Street. After scoring Star Wars: The Force Awakens for their grand opening and bringing in Lost Weekend Video