A proposed (extremely expensive) plan, first floated last May, to remove the existing Caltrain rail yard as well as parts of the I-280 overpass and off-ramp in SoMa/Potrero in anticipation of electrified trains and the Transbay Transit Center is moving forward with the unveiling of the first of what are sure to be many feasibility and impact studies, tonight. The study, titled "Rail Yard Alternatives and I-280 Boulevard Feasibility Study," has been a year in the making and is getting its first look at a community meeting at the Potrero Hill Recreation Center, as the Chronicle reports.

One of the first issues being discussed is whether to bore a tunnel underneath 16th Street in order to take Caltrain  and the eventual high-speed rail  underground, or whether to "trench" the street and make cars go under the street-level tracks, kind of how Cesar Chavez has that bicycle- and pedestrian-unfriendly trench under the freeway.

But advocates for the plan, including the mayor, say it makes no sense to look forward to these major transportation improvements, and our new transportation hub, without planning for the removal of the half-mile-long rail yard, which will also free up a bunch of land for potentially lucrative development. As the Business Times notes, a possible 25 acres could come up for grabs if all this were to happen, which could be used for residential, affordable housing, parks, new retail hubs, and more.

As you can see in the map below, the proposal would also take trains underground right by the new Warriors Arena as well as AT&T Park on their way to the Transbay. The red section shows the section of freeway and off-ramp to be demolished, which would also have the effect of "weaving" this edge of SoMa into neighboring Dogpatch and Mission Bay. 280 would get replaced here with a surface boulevard like Octavia. Also, there would be a new joint Caltrain/Hi-Speed Rail/Muni station near AT&T Park 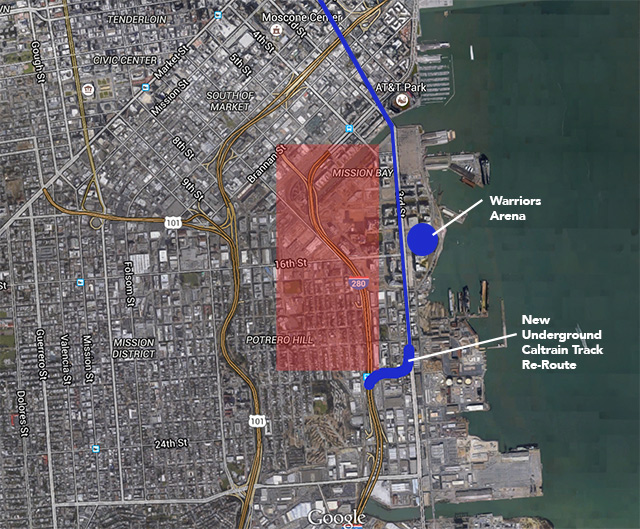 Also being studied is the possibility of a loop track at the Transbay, which would increase train capacity from the existing "stub" station that Caltrain has, wherein trains enter and exit on the same track.

Gillian Gillett, the city's director of transportation policy, is pushing for a little bit of patience around this three-year study, given how little planning has gone into these massive infrastructure changes, and how they will affect these neighborhoods.

“One of the reasons we are in the soup we are in is that development and transportation improvements have not been happening at the same time,” Gillett tells the Chronicle. “If you are going to invest in this big seismic shift from diesel to electric, which we have got to do, you also have to look at all the stations. Are the tracks in the right place? Are the stations in the right place so that we can create real connections to other systems?"

Head to the Rec Center at 801 Arkansas Street between 6 and 8 p.m. this evening if you want to be among the first to take a look at the initial study results  and SFist will update you here as soon as we some as well.

Division Street's tent city, a sizable homeless encampment beneath a section of the Central Freeway that has grown in size over the last two winters, will be cleared by city agencies within 72

Marie Hatch is 97 years old, currently fighting cancer, and has lived in the same Burlingame home for 66 years after her original landlord and friend promised her a lifetime lease. Now, thanks