A planned and well publicized protest today next to the Ferry Building, outside the former Sinbad's, has predictably attracted a large response from the SFPD.

As SFist's Joe Kukura tells us, "150-200 protestors put up tents right outside Super Bowl City. Roughly the same number of riot cops show up and the loudspeaker announces that the tents are encampments and have to come off the street or they will be confiscated. The protestors cleverly pick up the tents and hold them at arm level, ergo, clearing them from street. Now it's just a silent standoff I assume will continue for an hour 'til people get bored." 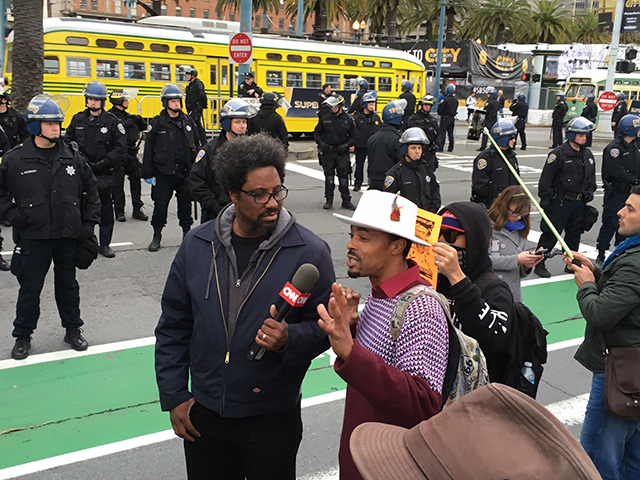 And, of course, Frank Chu is there. 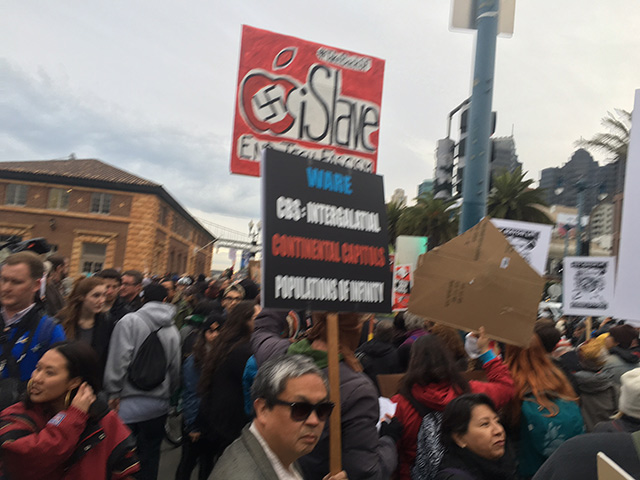 Here's some video of the police instructing protesters to disassemble the protest tents they'd put up in front of Sinbad's.

As the Weekly's Chris Roberts reports via tweet, there were twice as many cops as protesters at first, however it looks like the protesters' numbers are growing as people are leaving work, etc.

More on this as it develops, or as it's shut down.

Update: SFist's Joe Kukura reports that the protest lasted well beyond the first two hours, and grew to at least 400 people. He also noted that Tom Ammiano made an appearance, saying, "There's a guy living in Marin who's responsible for Care Not Cash, and he's running for Governor... There are solutions. It is a state problem, it is a national problem. Hillary and Bernie, where the hell are you? I haven't heard you talk about the homeless, I haven't heard you talk about housing, and you're in every goddamned city that has a homeless issue."

Just another day in #SB50 city. Enjoy your stay, @NFL. Cops took a step back but tents still here pic.twitter.com/O8rn5XK1WG

Fun story: A man by the name of Beezow Doo-doo Zopittybop-bop-bop has been arrested in Washington State. His not-that-funny crime: Allegedly assaulting two police officers at a college. Also, yes, before you ask,

City College of San Francisco is seemingly constantly in the news for scandals ranging from issues of accreditation, to extravagant administrative meal and travel expenses, to sketchy potential skirting of no-bid contract rules.