Last month the San Francisco Municipal Transportation Agency launched a survey with the goal of determining how San Franciscans feel about illegal double parking on Dolores and Guerrero Streets by churchgoers (and whoever else gets there early) on Sundays. The survey results are in, and they could not more clear: 75 percent of survey respondents oppose the current state of affairs, while 74 percent of residents in the area support banning median parking on Sundays altogether.

On the other side, 95 percent of "[congregants] who worship in the project area" oppose banning the double-parking status quo (surprise!).

The contentious practice of Sunday median double parking has been tacitly permitted by SFPD and SFMTA for years  though there have occasionally been some late-afternoon waves of ticket-writing  and the city agency now hopes that information gleaned from the survey will contribute to a community-supported plan to address the chaotic weekly scene that poses a danger to drivers, pedestrians, and cyclists alike.

Just in 2013, the SFMTA's Lea Millitello told Streetsblog SF that double-parking for church on Sundays was "part of San Francisco’s history," even though District 8 Supervisor Scott Wiener quipped, "I'm pretty confident that the hundreds and hundreds of cars [on Dolores every Sunday] are not all going to church, unless Dolores Park is a church."

The survey, which had 3,766 respondents, included an opportunity to leave an open-ended response. Many people filled out this section (1,665 to be precise), with a large number voicing displeasure at what they view to be a taxpayer funded subsidy of religious organizations.

While the results of the survey appear unambiguous, that doesn't mean we should expect swift action from SFMTA in one direction or another — for as the survey summary notes, "the survey is neither the determining factor in the SFMTA's final decision on median parking nor a statistically significant random sample of the stakeholders." 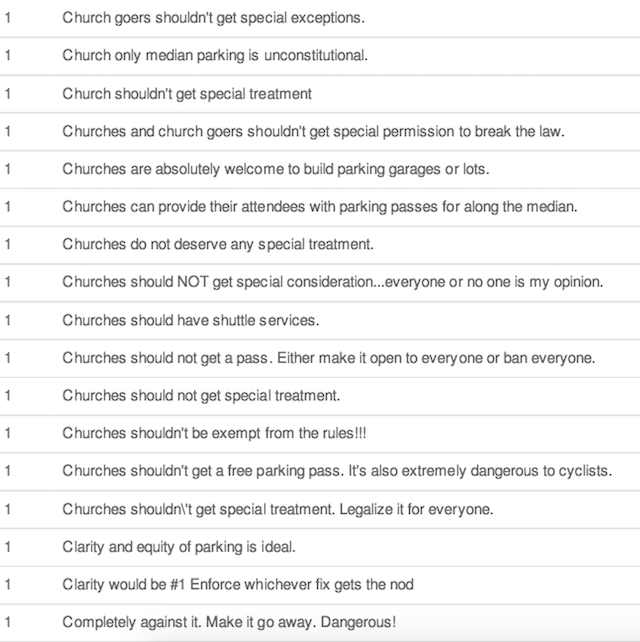 Yes, Virginia, in Portlandia, even Santa has a man bun. Portland, Oregon's KOIN dubbed the guy the Hipster Santa when they put him on TV last week, and this particular unidentified Kris Kringle

—
No, Most Mission Residents Are Not OK With Median Parking On Sunday
Share this