Gay Shame, a group that describes itself on Facebook as "a Virus in the System.... committed to a queer extravaganza that brings direct action to astounding levels of theatricality," has now peppered the Divisadero corridor with poster pastiches of anti-tech (or updated anti-yuppie) vitriol. Hoodline writes that more than a dozen head-scratching fliers like the ones below now dot the street.

When vaguely threatening messages appeared in the Mission District back in September — "You are hereby advised to leave the Mission. Your next warning will not be so polite" — their source wasn't so clear. But Gay Shame's page has a signed image of those previously unsigned Mission fliers, leading us to believe they were responsible for the last round of tech hate, too. 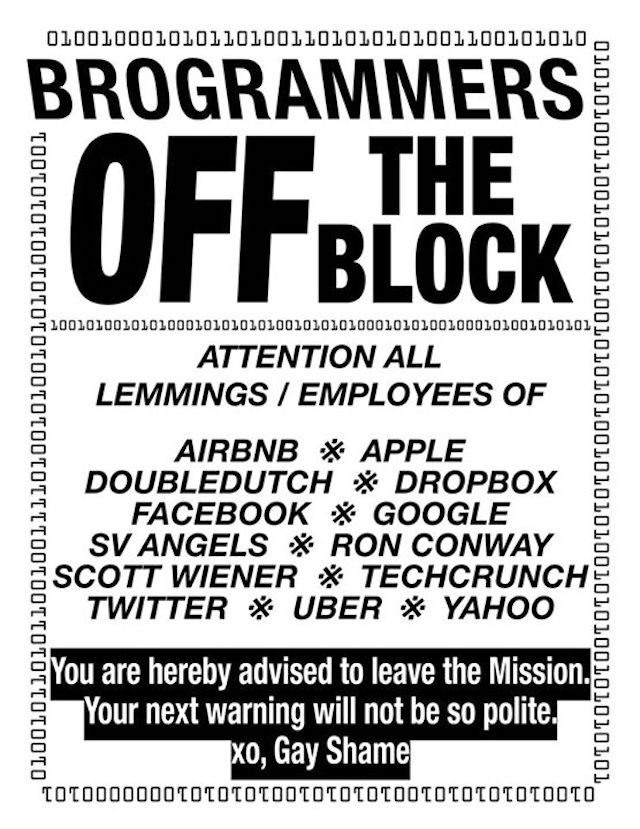 The recent group of budget collages takes jabs at a variety of past incidents. Those include the case of a woman who unwisely wore Google Glass to punk rock bar Molotov's and last year's
protest of a prison-themed party at Kink.com headquarters in the Armory, which itself turned violent. The reference to "Belong Anywhere," changed to "Be Wrong Anywhere," is seemingly a parody of Airbnb and one of its slogans.

Gay Shame's page indicates that the group held a meeting recently, at Modern Times Bookstore, and one might guess the new round of signs came out of that meeting. However, one of the "new" fliers was spotted in late October, so who knows, really. Anyway, the group's next rendezvous is November 28th, so don't be surprised to see the same mixed-message sentiments rehashed on more fliers after that.

And, the irony of a queer activist group promoting hate of any kind, or violence against an undesired group, is clearly lost on them.

Just in time for Black Friday shopping mania, that pedestrian plaza that helps distract from the chaotic, never-ending Central Subway construction is coming back. The turf was getting laid over a week ago,

“The number of people on the move between 4 and 5 o’clock is up, and up strongly,” Metropolitan Transit Commission spokesman John Goodwin told KRON 4 last month. Echoing that statement — traffic