A vigil to honor those killed in the Paris attacks on Friday night happened at 3 p.m. Sunday in front of City Hall, which lit up in tribute of the French flag's tricolor earlier this weekend.

People continue to gather on the steps of San Francisco City Hall organized by member of the French community. pic.twitter.com/IQNckYinHp 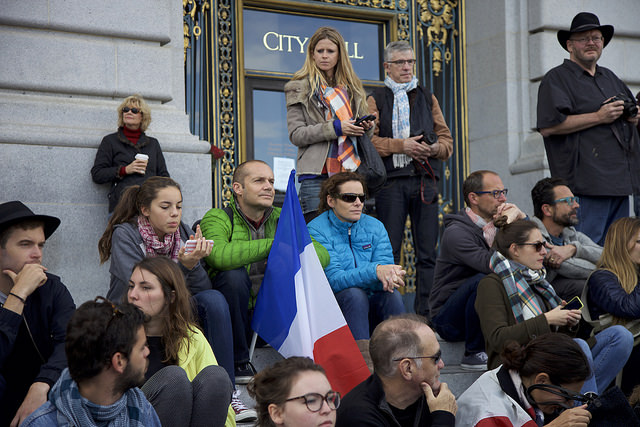 KRON 4 has some footage from the event, which drew hundreds to the steps of City Hall.

Bay Area residents have already come together throughout the weekend to mourn the attacks. As S.F. Gate reports, a vigil on Saturday night brought more than one hundred people outside the French Consulate on Kearney Street. Many started singing the French national anthem, "La_Marseillaise" which includes the line:Contre nous de la tyrannie, l'étendard sanglant est levé," translated as "Against us tyranny raises its bloody banner."

Even the rain couldn't remove the makeshift memorial in front of the French Consulate; this morning, after the rain stopped, building workers replaced the flowers, candles, and tokens that had been left in tribute:

As a sister city to Paris, San Francisco has close ties to the city, and many Bay Area residents have been touched by the attacks. Marine Thomas, a Paris native who lives in Redwood City, got a phone call from her father on Friday night, who was in the Bataclan in Paris when the gunmen entered, she told S.F. Gate. "My dad called me and said, 'Somebody is here; they’re shooting.' And then he hung up,” Thomas said. Her father called back later—he was unharmed, having crawled backstage and escaping out of the theater.

Alice Waters' daughter Fanny was apparently having dinner "down the street" from one of the restaurants that was targeted, too, but was ok.

About 700 vehicles participated in sideshow activity around East Oakland early Sunday morning, reports the Contra Costa Times. But this wasn't any old sideshow: in the video above, posted by KRON you can