The bundle of joy that is Super Bowl 50 has found yet another way to mess with your commute. Not content to take over Justin Herman Plaza and a chunk of the Embarcadero in the name of a Fan Village — sweeping any and all homeless under the rug in the process — the Super Bowl 50 Committee has plans to remove the unsightly overhead Muni wires along Market Street. That this could potentially disrupt bus lines and streetcar traffic for weeks before and after the event appears to be of little concern.

While the Super Bowl itself is set to take place at Levi's Stadium in Santa Clara, the Fan Village will be right here in San Francisco. With street closures from January 30 to Game Day on February 7, 2016, that section of the city will effectively be shut down for eight days.

In conversation with The Examiner, Supervisor Jane Kim confirmed the Super Bowl 50 Committee's desire to pull down Muni wires.

“The [Super Bowl] committee has been very open about it," explained Kim. "They’ve said that’s what they want. They’ve definitely been asking to take down the overhead wires on Market Street.”

Unnamed sources confirmed with the Examiner that any wire removal would probably cost a “seven-figure number” and necessitate “lots of overtime” to do correctly.

However, the removal is not set in stone. Dan Weaver, a member of the San Francisco Municipal Transportation Agency’s Citizen Advisory Council, told the Examiner that the item is on the agenda for the December 3 meeting of the council.

The meeting, which takes place on Thursday, December 3 at 5:30 p.m., will be held in the 7th floor SFMTA offices at One South Van Ness Avenue. If you can't attend in person, but wish to make your voice heard, you can always email the committee.

Perhaps the committee's plan should come as no surprise — after all, in looking back at the Fan Village renderings, all Muni wires are conspicuously absent. 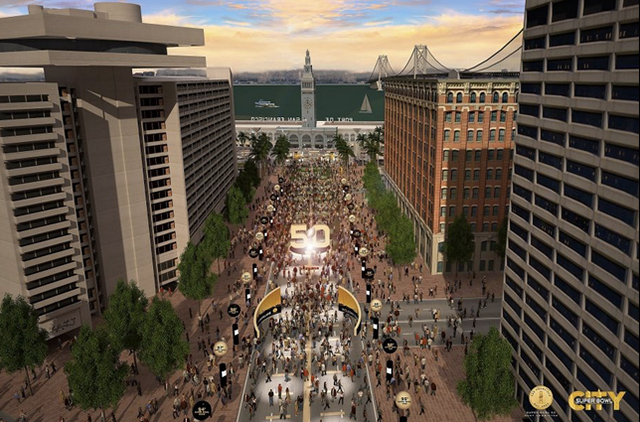 Sundays in San Francisco bring with them a familiar scene: hundreds of cars, illegally double parked, lining the streets for blocks surrounding prominent churches. As many churchgoers drive to their religious services, this

With 11 years to go on the lease of its China Basin office headquarters at 185 Berry Street near AT&T Park, cloud storage pioneer Dropbox is looking to ditch the 200,