SFist's Caleb Pershan is pinch-hitting on the Apartment Sadness column this week, with a video twist.

"They haven't gotten much water, recently," says a resident of the 41-room, Bitcoin-friendly community at 20Mission, gesturing to pots of thoroughly dead plants in the rooftop "farm" portion of a new video tour. "Because... Burning Man," he adds, fully aware he's delivering a punchline but mostly unaware of how dry, and dead, this joke excuse has become.

20Mission, a 12,000-square-foot home for about 45 occupants, is located at 20th and Mission Streets. But 20Mission and its ilk also occupy a very particular place in the popular imagination of San Francisco these days. That's why this great video tour is so valuable: It offers what feels like a relatively honest take on the dorm-style personality of the actual place.

Once a single-room occupancy hotel like so many on blocks nearby, a mysterious resident death decades ago cleared the place out, and it fell gradually into disrepair. Now, ghosts at 20Mission are the stuff of dark humor among residents, who pay $1,400 per room per month. (Bitcoin accepted!)

There are only two gender-neutral bathrooms shared by all the residents, though it's unclear how many toilets and showers are in each.

Mission Local dove in to the spot last year, noting a bit about the current day hostel's origins.

Landlord Jered Kenna, chief executive officer of financial tech company Tradehill, found out about the building though a friend. Wanting to alleviate San Francisco residents of housing concerns and come up with a collaborative living idea, Kenna thought the building “seemed like a perfect fit.” He’s been the landlord for more than a year and has a long-term lease on the building — one that’s added 41 units onto the housing market.

"I'm building a sports app," one resident in the video says while sitting in his decidedly collegiate room. "And NFL," he checks his Apple watch for good measure and in such a way that we can tell he would like us to notice it, "NFL season starts in 4 days."

The Guardian earlier spoke with resident Ben Greenberg, who works as a software engineer for someone else's startup but also has a little side startup of his own called glowyshit.com, which sells glow sticks and Burning Man-style colored lighting for your dorm room. As he puts it, "Your very first startup is just, like, always so bad," and a friend adds, "It’s like your first kiss.” 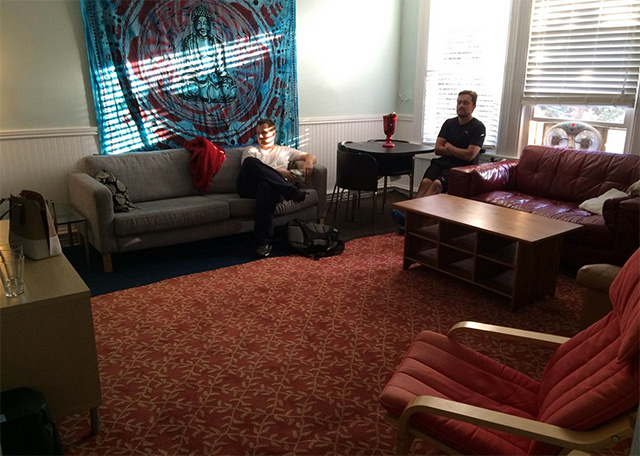 The video was flagged by Capp Street Crap, 20Mission neighbor and journalist. It's sort of like MTV Cribs, but then again, it's sort of not like MTV Cribs. Have a look. Greenberg is in this too.

For some reason the hacker hostel has one of those weird inflatable wavy armed characters on its roof pic.twitter.com/ucqFTYk4eR

SFist took a glancing peek at the home for "art and technology creators in the heart of the Mission District," per a description on 20Mission's website, when speaking to one resident earlier this year. Living with so many others, and having been established for a while in the area, she "felt like a little assignment and decided to make a handy chart for our fridge" detailing the many local delivery options.

Party footage of 20Mission has also circulated online, as of the seasonal celebrations below.

See you at the next one?

One of the common areas. Photo: 20Mission

According to the San Francisco Police Department, a man who was fatally shot by an SFPD sergeant Thursday afternoon had wrested a gun away from another cop, and was pointing it at the

The Executive Vice President of the Oakland Athletics, Billy Beane, is a rich man. And, as is often the case with rich men, Beane appears to be used to getting what he wants.