The Thrillpeddlers’ Shocktoberfest 16: Curse of the Cobra (playing through Nov. 21 at The Hypnodrome) concludes with an exhilarating, terrifying three-minute musical sequence that messes with your depth perception, makes great use of darkness and serves up the wildest and spookiest special-effects theatrical set-piece of the Halloween season. But the two-plus hours of theater that lead up to this finale scene are not nearly as memorable.

Shocktoberfest 16: Curse of the Cobra, the 16th annual installment of the Thrillpeddlers’ Halloween stage show, presents five one-act horror performances in the graphic and shocking French Grand Guignol tradition. Any anthology or “collection of shorts” usually ends up being a little uneven, but Shocktoberfest 16 is especially so. It’s something like a Twilight Zone musical revue with a lot more drag and plenty of severed limbs. The music, drag, and gross-out humor are all winning elements, but the show spends too much time on dramatic turns focusing on alcoholism and sexual violence. These lengthy and serious scenes aren’t sardonic enough to work as black humor, and aren’t compelling enough to work as drama either. Most of the play falls into an awkward middle zone that presents morbid subject matter that doesn’t fly as funny or moving or anything other than cringe-worthy.

The musical numbers all pop, however, and I just wish there were more of them. In particular, the second vignette is a glorious little ditty called “Down at the Donner Party Diner”. It’s sort of a Country Bear Jamboree interpretation of the horrific Donner Party cannibalism incident of the 1840s, composed by ex-Cockette Scrumbly Koldewyn. I would gladly watch a two-hour Donner Party musical! But this segment only lasted four minutes, leaving the audience hungry for more. 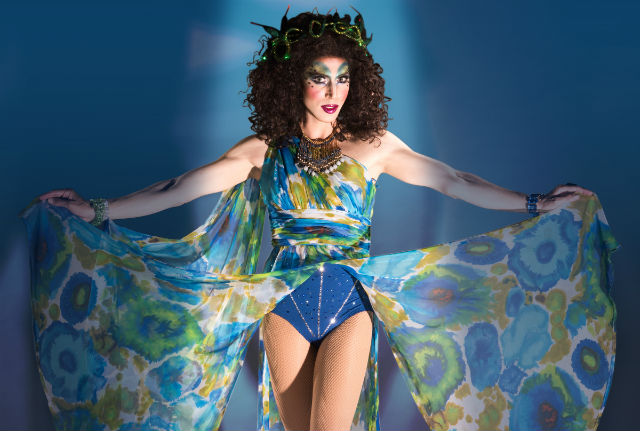 Shocktoberfest 16’s short segments are its best moments. A Gold Rush-era horror vignette called “Cracking the Vein” is highlighted by Dee Nathanial’s musical number, but is otherwise predictable and fails to connect. The longest segment “The Model House” seems like a chore for the audience to get through. The sort-of titular segment “The Revenge of the Son of the Cobra Woman” features great costumes and music, but does not feature a sensible or riveting narrative.

The show maintains the gross-out Grand Guignol tradition, and SFist had the pleasure of watching the show next to theater author Mel Gordon, whose 1997 book The Grand Guignol: Theater of Terror and Horror was first English-language book on the topic. “One thing about the Grand Guignol, it saved the one-act play,” Gordon told SFist. “It alternated six one-act plays or sketches with ‘hot and cold showers’. The hot showers were sexy, funny farces and the cold showers were plays of mutilation and terror that were so realistic that the actors counted how many people fainted in the performance. Usually it was about six to eight and it was usually men, because they didn’t cover their eyes.”

Since Shocktoberfest has been running for 16 years, surely the Thrillpeddlers are doing something right. But in this year’s edition, they’re not doing enough of it right. The musical numbers and graphic splatter scenes are all tremendous fun, but Shocktoberfest 16’s stabs at legitimate drama should have been severed and chopped off.

'Shocktoberfest 16: Curse of the Cobra' runs Wednesdays through Saturdays at 8 p.m. until Nov. 21 at The Hypnodrome. Tickets are available online.

Noah Haydon in Thrillpeddlers production of 'Shocktoberfest 16: Curse Of The Cobra', Photo by davidallenstudio.com

In case you missed it, Treasure Island Music Fest returns this weekend for two pretty mellow days of shows on two stages that don't overlap  thus, no running around or stressing about what

Test riding an electric longboard on smooth Mountain View asphalt near Boosted Board headquarters, I am Aladdin on a f--king magic carpet — but with, like, a helmet. Company founder Matthew Tran coasts at

—
SFist Reviews: 'Shocktoberfest 16: Curse of the Cobra' at The Hypnodrome
Share this