Last night, I had dinner with my SFist colleagues. We wanted to sing karaoke after we ate, but The Mint was too busy. At around 10 p.m. we called it a night. By 10:30, my Uber driver had announced that he was going to sexually assault and murder me. Here's what happened.

I was at the Church and Duboce N Judah stop, standing in front of the gate of 400 Duboce. I had checked NextMuni and saw that an N wasn't expected to arrive for another 25 minutes. I was tired, I didn't have anything to read, and there was this screaming guy over behind the Safeway so I decided to summon a cab with Flywheel. The app crashed every time I opened it. So I used Uber's app to hail an UberPool, and manually input the pickup address as 400 Duboce.

About four minutes later, my phone rings. It's my driver, who leads with "I am here, where are you?" "I'm at 400 Duboce," I say. "No you're not, I am at 400 Duboce Avenue and you are not there. Where the fuck are you? What kind of person isn't there when they call an Uber?"

"I'm right here, where I said I was," I said. "But I'm not comfortable with this," I said, because if a guy is aggro enough to start swearing at me off the bat I'll be damned if I'm getting in a car with him.

"I'm going to cancel my ride, thank you." I hung up, and hit "cancel ride" on the Uber app.

As I'm doing that, my phone rings again. At the same time I look to my left, and I see a black sedan start to drive up the ramp to the raised Muni platform. I answer the phone.

"I canceled the ride" I said. (I will never forgive myself for not having a snappier comeback to the dick/pussy thing but like I said, I was tired.) I hang up.

The driver of the sedan backs down the Muni platform's ramp, then drives forward, past me, slowly. This is when it occurs to me that this might actually be going from a conversation with an asshole to a truly fucked situation. I backed into the gate at 400 Duboce, vaguely thinking that I could start ringing the doorbells on the gate if things got more nuts. My phone rings again. I'm not sure why, but I answer it.

I call 911, and the dispatcher is great. She keeps me on the phone, even as I see the sedan slowly pass again, this time going the other way. The sedan's driver looks over at me. He's saying something, but the window is rolled up. If I had to guess, though, I don't think it was anything pleasant.

He calls twice more while I'm on the phone with dispatch, idling at a nearby stop sign. I see the voicemail notifications roll in. One time he hung up, the other time he left this:

Certainly not to the level of what he said to me directly, but still, not an especially professional call. (Keep in mind, I had canceled the ride immediately after the first call from him, and it was listed as "canceled" on my "history." There was literally nothing else I could have done.)

All in all, over the course of two minutes, he called me five times. (I blacked out part of his number for publication, but I certainly shared it with the authorities! Sorry, I'm getting ahead of myself.)

Two officers from SFPD's Park Station arrive, and they're terrific. They listen to my account, ask all the right questions, and try to get as much information as they can about the driver from Uber's app, which is not much. As you know, all we get is a small image of the driver's vehicle, a small head shot, and a first name. I gave them the driver's cell number, and played them the voice mail. They gave me a case number.

What I realized as I waited for the police is that it's likely the driver's navigation was off. Check this out: The "pointer" on the Google map below marks 400 Duboce as being on Church between Duboce and Hermann. Where 400 Duboce actually is is around the corner from that, which I marked with "Eve IRL." 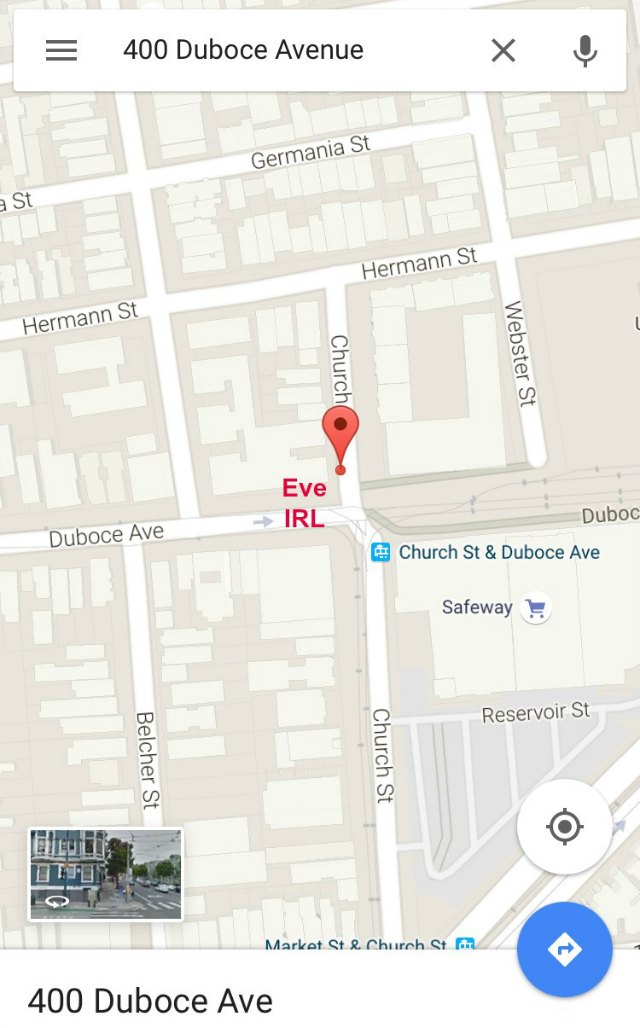 That said, the words "Church Street" are fairly visible on the map, which seems like the sort of thing a driver might consider. Oh, and also, when a map is incorrect, maybe threats of sexual violence shouldn't be your initial go-to?

My favorite part of all this? Uber still charged me a fee for the ride. 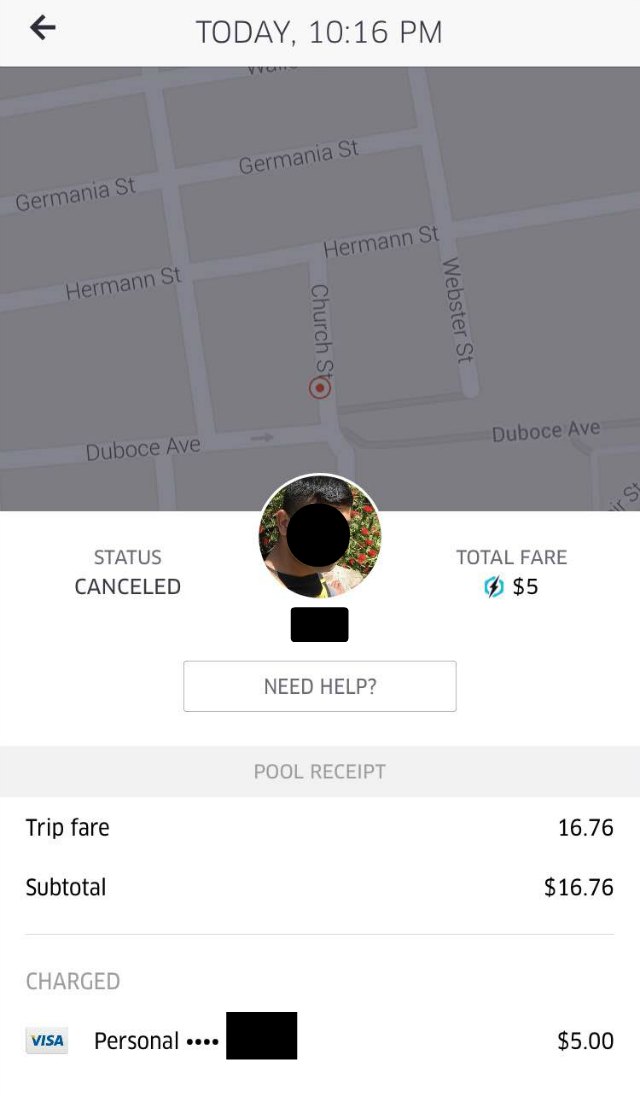 Hilariously, in the email they sent confirming that they'd charged me, you'll see that they say "please contact us and we'll make it right." That line isn't linked to anything, and there isn't any contact information. That's cool, I can Google Uber's contact information, but that's certainly not the way one would communicate to customers that you're eager for them to get in touch, is it? 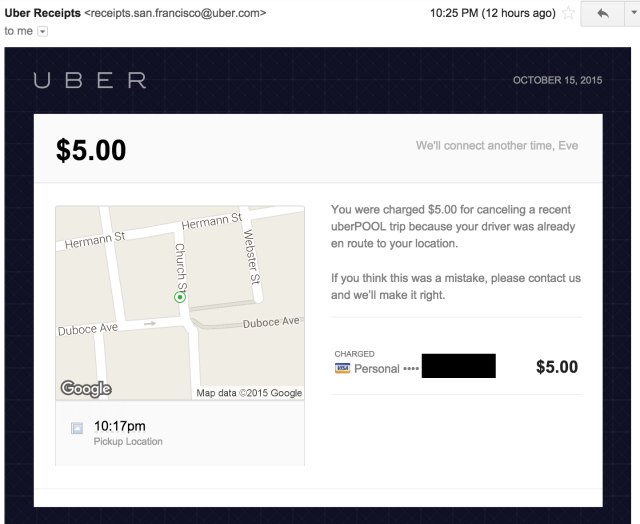 At 7:35 this morning, I Googled then emailed Uber's support email address with the details on my driver/ride and my SFPD case number, asking that they call me regarding the situation. As of 1:30 PT, I have not received a response (I purposefully waited to publish this to give them a fair shake). I also contacted Uber's PR at around that time, and have been met with similar silence.

Update 2:14 p.m.: I just received a call from Jennifer in Uber's safety department. My email to them did not go in their "urgent stream" she said, so it wasn't until readers started tweeting about this story that she got the alert. She says they will investigate the driver, and confirmed part of RutDog's comments: the driver didn't ever have my number (nor I his), and he lost the ability to contact me 15 minutes after the ride was canceled. He did have my destination, but that "disappeared" from his app after I canceled the ride. This is all good news, I think. She also refunded my $5.

Update 4:08 p.m.: Matt McKenna, Uber's head of communications, North America called me at 3:11 p.m., and we had a good conversation about the situation. He, like Jennifer, was very kind, engaged, and apologetic that I did not get a response sooner. He provided me with this statement to add to the piece: “We want to offer our deep apologies for this terrible ordeal and thank you for bringing this to our attention. This kind of behavior is absolutely unacceptable and the driver’s access to Uber has been permanently removed.”

I know I'm neither the first person to have a troubling or dangerous interaction with an Uber driver, and compared to the experiences of many, mine was a walk in the park. And while taking pains to make clear that he was not speaking to my specific case, San Francisco District Attorney George Gascon tells me this afternoon that “I strongly support innovation, but innovation does not give companies a license to mislead consumers about issues affecting their safety.”

As we reported in August, Gascon filed an amended complaint against Uber, asserting that Uber's background check method is inferior to that of regular taxi companies and noting 25 active Uber drivers with criminal records.

Of course we don't know if the guy from my case last night had a record, but I'm hopeful that by filing a police report, he'll have one soon. (The SFPD officer who could answer my questions on how an investigation would proceed wasn't in the office when I contacted them today, but when they do respond I'll add that information here.)

I've been sitting here trying to figure out how to end this thing, and I'm a little bit at a loss. It's troubling to me that Uber hasn't responded, and it's even more troubling to me that, because of how the app functions, this guy knows where I live. I don't like sounding like a victim, and I don't want you guys to think I am bleating that I suffered the worst crime known to man.

All I guess I can say is that even though I read and write about rotten things that have happened to some of the people who take Ubers, it didn't occur to me that I could be one of them. And, blessedly, I wasn't — threatening to harm someone is a lot different than doing it (as these Uber drivers allegedly did). But, please, the next time you click on that little "U" on your phone, think about this post. And maybe think about it again.

Previously: SF And LA District Attorneys: 'Some Uber Drivers Are Murderers And Felons'

For what it's worth, the Michelin Guide is the most respected and comprehensive guide to local dining curated and edited by a non-local entity, and the go-to source for restaurant picks for globe-trotting

It seems like only yesterday that the City Attorney's office announced it would be closing down illegal gambling cafés in the Excelsior. The sweepstakes cafés, which have operated under a legal loophole in

—
Last Night, My Uber Driver Said He Was Going To Rape And Kill Me
Share this