Rising at 1321 Mission Street between 9th and 10th Streets is what might be thought of as an SRO Hotel for 2015. It's the Panoramic, and it offers us a view of housing for a population that seeks to learn and study on a budget in San Francisco: students and interns.

But the Panoramic isn't just catering to that population, it's requiring that its residents belong to it. Just like multiple properties highlighted in Apartment Sadness, and in an ongoing trend, the Panoramic is an SRO trying to be upscale by avoiding renting to low-income people who aren't students and interns. And how is this not discriminatory housing? How will they even enforce that?

The building is described as a "brand-new high-rise residence... [that] offers affordable apartments and studios with full kitchens, natural light and expansive views; spaces for study, socializing and work."

Yep, all the little stuff is there and taken care of, from utilities, to beds and furniture, to a flat screen TV. With car-share on site, a lobby fireplace and seating area, reading and meditation rooms, dorm-style lounges on each floor, and a roof deck and second floor terrace, it's all, seriously, somewhat tempting. Yet the price, and, frankly, the small spaces, might be a barrier to many. Explicitly marketed as close to a Whole Foods, how affordable do we really expect these places to be? Here's the breakdown.

Choose your own adventure on a 9- to 12-month lease: 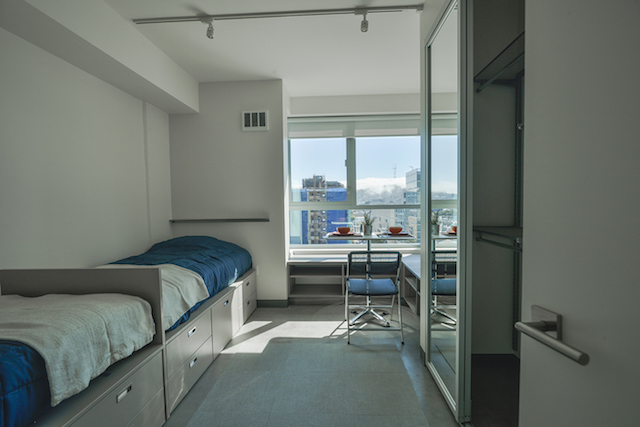 First, a shared 600 square foot apartment room with two beds, a kitchen, and a bathroom, one bed is $1,495 per month. 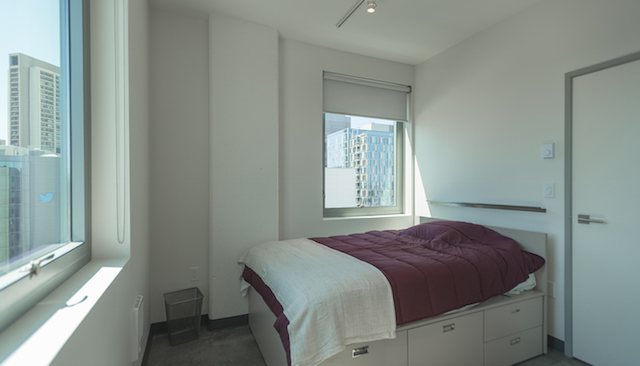 A private room via the Panoramic

Second, a private room in a space totaling that size and also with a kitchen and bathroom is going for $1,995 a month. 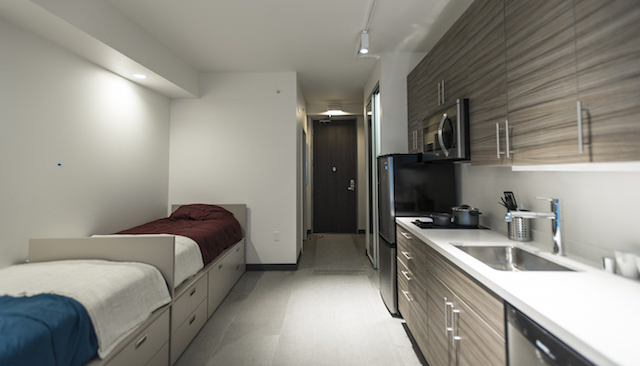 A studio (2 beds) via the Panoramic

That last one will probably set some people off — as the Chronicle notes, I guess the idea is to share it?

Here, if you're interested, is a taste of the marketing:

With truly nice-sounding amenities and in an area that's well situated to a young person interning at a downtown company or studying at a conservatory, this could be a good alternative to being price-gouged by a stranger on Craigslist. Especially, of course, for a student or intern with some savings or parental assistance.

But how long can you last in these quarters at that price? As highlighted by the Business Times, a new Urban Land Institute report found that the San Francisco area's high housing costs leave Millennials unsure of how long they'll stick it out.

74 percent of Millennials living in the Greater Bay Area are considering moving away over the next five years due to expensive housing costs, while "just 24 percent are very confident that they will be able to own or rent their desired home in five years  a dramatically lower percentage than Gen Xers, 38 percent of which voiced strong confidence in their ability to move up; or Baby Boomers, at 49 percent," in the words of the report.

A shared apartment via the Panoramic

Acclaimed chef Matthew Lightner, who's moved to the Bay Area from Portland via a Michelin-two-star stint in New York, will be debuting his latest venture Ninebark next Tuesday, October 13, in downtown Napa.

Of course, you already know it's Fleet Week, but here's your Fleet Week Thursday don't freak out reminder: The notoriously-loud Blue Angels will begin practice runs over San Francisco at noon today, so