The McDonalds at 600 Van Ness Avenue closed abruptly this January after 36 years, as Hoodline reported at the time, and now plans are being entertained for a 9-story mixed use residential building on the 13,080 square foot land parcel where the two-story fast food joint stills stands like a suburban sore thumb. 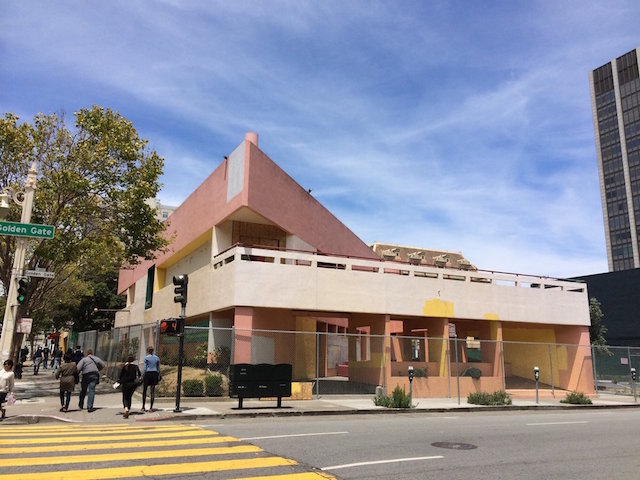 Hoodline and Curbed report that the plans, filed last week, call for 150 units across 9-stories (the site is zoned for up to 130 feet in height). Those units would be 87 studio, 37 one-bedroom, and 26 two-bedrooms apartments Among them might be several two-story townhouses.

Plans also allotted for 4,800 square feet of ground-floor retail space. Underground parking with an entrance on Golden Gate would provide 108 spaces for cars, with 105 for biking on the ground floor along with a lobby, office, lounge, and leasing office.

The design, which is for two towers with glass skybridge walkways between them, has an interesting backstory. The neighboring Bay Area Women’s and Children’s Center, a nonprofit that acts as part of the Tenderloin Community School at 627 Turk, worked with the developer and expressed their concerns about shadows from the new building — hence the terrace-like design increasing in heigh from Elm to Golden Gate — and their views of city hall — hence the two towers with just glass between them, retaining the views.

The partial, perhaps soon-to-be-former owner of two Richmond district restaurants, Hong Kong Lounge I and Hong Kong Lounge 2 (the latter of which has a place on Bauer's Top 100 for it's excellent

Some patrons of Palo Alto's public library are scratching themselves silly, after reports of bedbug sightings at a local branch have them worried they got a side dish of "parasite" when they checked