CityLab, a web arm of The Atlantic, apparently is a fan of Apartment Sadness, because staff writer Kriston Capps just wrote this piece on all the terrible bunk beds you can find to share on Craigslist in SF. His sub-headline: "The horror show that is acceptable SF living speaks to the real effects of the city’s extreme housing shortage." You know it, brother. And he's based in DC, so this is just some East Coast schadenfreude, as opposed to the true, deep, dark, rage-filled, wailing sadness that I bring you each week from the heart of the horror show, here at SFist. But I'll tip my hat to Mr. Capps for pointing me to this ad, which wins the prize this week for the saddest, most egregious housing offer this side of the bedbug-infested nightmare of North Beach that remains on the market, that I explored with you last week.

This time, we're in the Financial District, or perhaps somewhere near Fisherman's Wharf actually, since it lists walking distance to Safeway and Trader Joe's (both near the Wharf) first among the amenities.

This is a shared room, and it looks like you'd be getting the top bunk in the glorious space you can see above, complete with shared ginger ale, folding table, and perhaps a drawer to call your own. And I'm pretty sure that is a child's bunk bed, with that railing, so you'd better not be taller than 5'8" or so.

There are apparently three bedrooms, all of them with bunk beds, and the landlord here is already advertising spaces in the other two rooms that won't be available until January and February, respectively.

The available situation, shown above, is this:

Yes, and the landlord has the nerve to request a "good personality tenant who is cleaning, easy going, respectful, quiet."

Pretty sure that if you're signing up to share a bunk bed with an IT guy and lead a celibate life on a bunk bed, you don't need a personality, but whatever. Also, you're asked to "move in with little or less luggage," because clearly there is no storage.

Here's the only other photo of the available room. 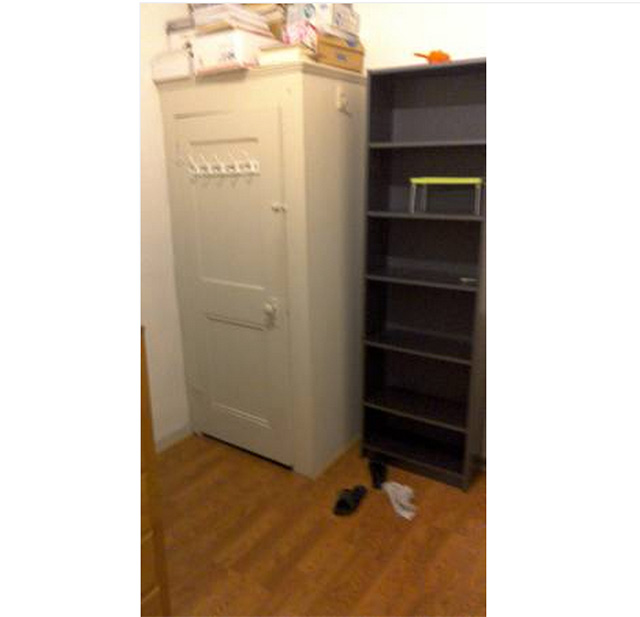 I guess he doesn't read, this IT guy.

For $700, this might be a steal for someone who just needs a place to poop, shower, and crash, and who's a sound sleeper, but like with many of these listings, I'm less judgmental of the person who chooses this than I am of the asshole who created it and will profit from it.

Combined with the other two shared rooms, available for $800 and $850 per person per month, respectively,

I would just like to say to all the landlords out there considering turning their units into hostels for man-children like this, you are bad people. Yes, you're merely using the housing shortage to your financial advantage, and why not make $4700 a month on a crappy apartment that you'd probably be able to get to $3,500 for normally. Actually, a three-bedroom in this market? You could probably get $4,000 or more for it if it was decently clean and decently located, so what the fuck. You're operating a flop-house with a revolving door of IT guys for the sake of a few extra hundred a month?

The 80-year-old woman who plowed a Mercedes SUV through a Livermore gym Tuesday, killing one person, had a very similar accident in front of the very same gym 18 months ago, according to

In the fifth such incident since April, a "badly decomposed" whale turned up on a Bay Area beach late Wednesday, this one at the Don Edwards San Francisco Bay National Wildlife Refuge. East