California's Giant Sequoias can live for 3,000 years. But can they survive the region's historic drought? Currently, they're displaying signs of stress, but they've endured much over their Millenia, evolving to resist fires and brief periods of drought. The AP reports that scientists studying them in Sequoia National Park are also fighting to help by identifying the trees' patterns of drought stress.

More than in past years, brown, dead patches are appearing amid green growth on the majestic trees, which grow nearly 300 feet tall. But at that massive size, a single tree can require 800 gallons of water per day. And with snowpack at a record-low, they're being put to the test.

Some groves of trees will, for the good of the species in general, get thinned out. That means prescribed burns, which will allow for more sunlight and water distribution. 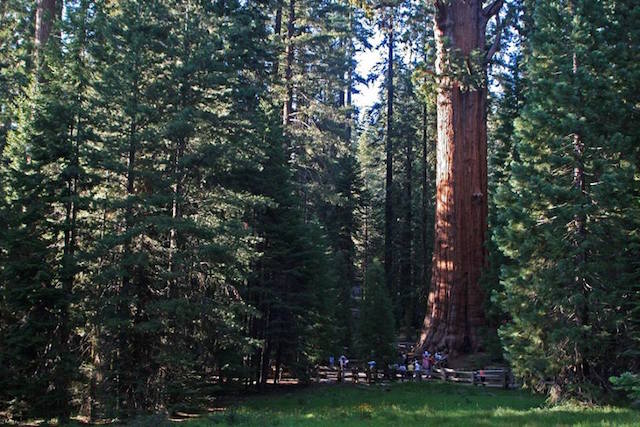 The current study has been ongoing for about a year, with USGS ecologist Adrian Das framing its central research question as "[w]hich parts of the Sequoia groves should we be more worried about." Researchers are taking data from the field into the lab to formulate a response. "Potentially, it's the Sequoias telling us, 'Hey, these are the areas where we're more stressed.' " said Das.

This summer's wildfires threatened the General Grant Tree, a celebrated specimen and among the tallest of the Sequoias. As the Guardian reported, that tree was spared from wildfire this summer as US Park Service firefighters built fire lines around it and put in sprinklers.

All SFist coverage of the California drought.

Los Angeles-based Lemonade, a fast casual chain that in the words of its marketing department is "part lemonade stand, part grade-school cafeteria," is reportedly in talks to set up shop in former La

Kink.com performer Daisy Ducati stars in this video, a parody take on Rihanna's "Bitch Better Have My Money" titled "Bitch Better Lick My Honey." And, yes, actual honey is involved. Also, there

—
Giant Sequoias, Some Of Earth's Largest Species, Struggle For Life Amid Historic Drought
Share this