Uber has just announced that it's buying a huge amount of office space  350,000 square feet  purchasing the former Sears building on Broadway in downtown Oakland. When rumors of the deal circulated among real estate professionals late Tuesday, one broker speaking to the SF Business Times said, "Oakland just changed. Wow."

Uber had been sniffing around spaces in Oakland over the summer, looking to add a reported 2,000 to 3,000 employees to the 2,000 they already employ in the region in the next two years. This marks a permanent expansion to Oakland, and will be in addition to the 500,000 square feet of space they're already renting in three buildings on Market Street in San Francisco, currently, and the 423,000 square-foot headquarters they're building and planning to move to in Mission Bay by 2017.

The deal comes as a bit of a surprise given that the Sears building sold just last year to Lane Partners for $25 million, and they were expected to be leasing it out  likely piece by piece to multiple tech companies. The price of this deal has not been disclosed.

Per the Oakland Tribune, Uber may not be opening the Oakland offices until 2017  or construction to revamp and retrofit the historic 1929 building is expected to take that long.

In a statement, Uber exec Renee Atwood says, "We are excited to deepen our roots across the Bay by investing in the revitalization of historic downtown Oakland and to become a permanent part of the fabric of the East Bay community by adding thousands of jobs at our Oakland site."

This is of course a boon for Oakland Mayor Libby Schaaf who has been talking up trying to attract tech dollars to downtown Oakland. "We're proud that Uber was attracted to Oakland's creative energy, incredible talent, progressive values, prime location and accessibility to the entire region," says Schaaf in a statement. She's also called a press conference for 12:30 p.m. today, and speculation is already occurring that the deal will be a catalyst for more companies to consider locating in Oakland  however there is currently a limited amount of available office space.

Assuming Uber fills all six floors of the building, this will make them Oakland's biggest non-government, non-healthcare employer, surpassing other big downtown tenants Clorox and Pandora. 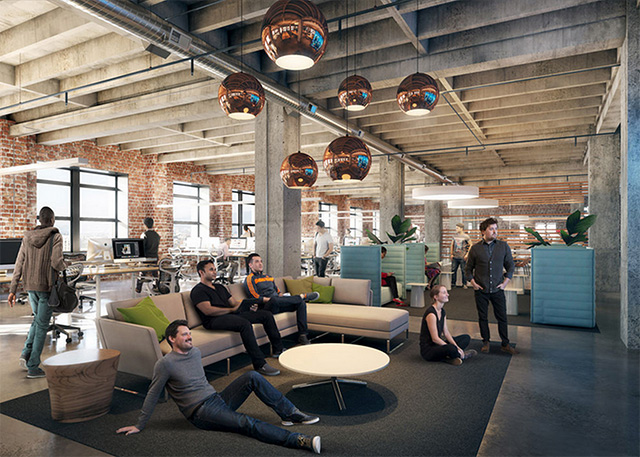 An ongoing redesign by local firm Gensler was set to Twitter-fy the historic building, adding a food hall to the ground floor and fire pits to the roof, as Curbed notes. That is likely still ongoing, but now with Uber's own customization. Steelblue has this fancy interactive, 360-degree rendering of the new atrium you can check out, too.

So yes, wow. Uber is enormous, and only getting more enormous by the day.

An interior rendering of Gensler's renovation of the building, via Steelblue.

W. Kamau Bell admits to "pulling back" in front of San Francisco's often largely white audiences. But last night on Valencia Street at the Chapel during a live taping of KQED's new podcast

Instagram says they have 400 million users. [Wired] The [Petrelis Files] catches the Chron in a Stonewall mistake. San Francisco is trying new tactics in the fight against college campus sexual assaults. [Bay