The devastation via wildfire to our north is now in its fifth day, and the Valley Fire is now growing more slowly, reaching 70,000 acres (over 100 square miles) and 30 percent containment. As of today, it ranks ninth on a list of most damaging wildfires in California history in terms of structures lost, now at 603 and counting, with over 7,000 structures still threatened, as Cal Fire Public Information Officer Daniel Berlant reports. Thankfully, there's a chance of rain today (a tenth of an inch or so) which will help firefighting efforts, however it will make outdoor camping less pleasant for the hundreds of evacuees not in indoor shelters.

Meanwhile, CBS 5 tells us about a man who is missing who has not been heard from since Saturday night, and authorities are fearing the worst. 69-year-old Leonard Neft, a former reporter for the San Jose Mercury-News, last spoke to his wife on Saturday saying he did not feel threatened, however his burned out car has now been found along a road in the Anderson Springs area that may have been his escape route. This is the same area where this harrowing video of an escape was shot, and where 72-year-old Barbara McWilliams was found dead in her home. 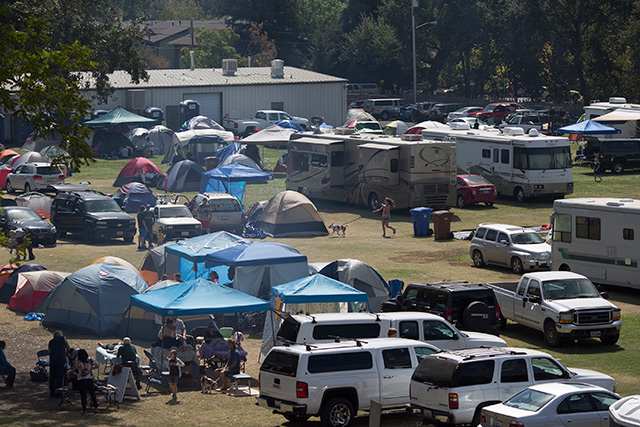 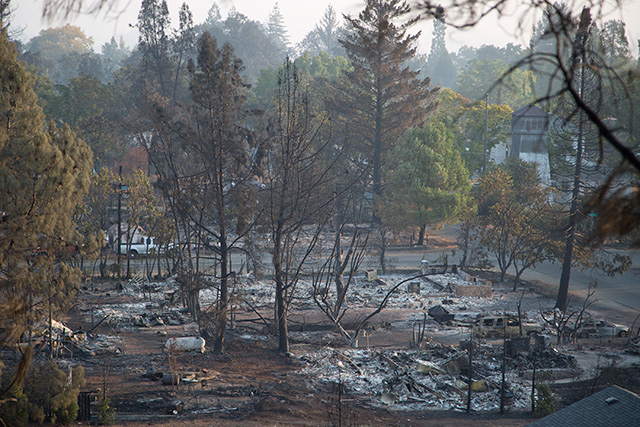 The ruins of homes that burned in the Valley Fire as seen on September 15, 2015 in Middletown, California. (Photo by David McNew/Getty Images)

KRON 4 reports on one of the suspected burglary arrested made in an evacuated area. 26-year-old Royce Moore, pictured here, was found with an accomplice in a car early Tuesday morning, wearing all black, in possession of what appeared to be burglary tools. There were already two warrants for Moore's arrest.

The New York Times picked up the story of all the animals left behind in the Valley Fire, in particular horses and livestock, many of which survived and now present a huge caretaking task for local animal care teams. 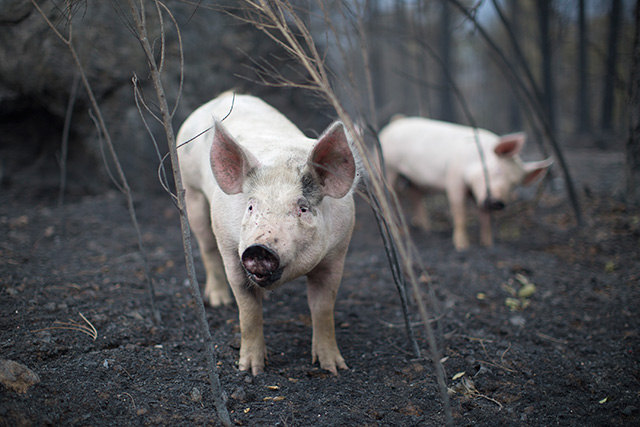 Pigs look for food while wandering a forest burned by the Valley Fire on September 14, 2015 in Middletown, California. (Photo by David McNew/Getty Images) 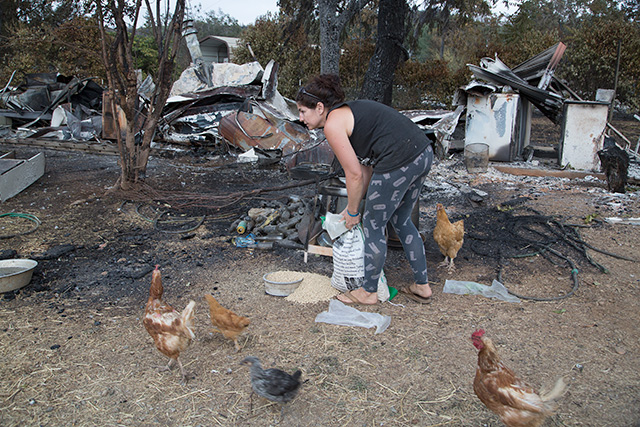 Chandra Woodhouse feeds her chickens next to the ruins of her house in Middletown. (Photo by David McNew/Getty Images)

The Chron tells the story of Amber Roberts and her husband, Jesus Cabezas, who were not at home in their house in Cobb on Saturday, but whose seven dogs and flock of chickens were likely all lost in the blaze that leveled the home.

And KRON 4 has video you can see below of a badly burned cat who survived, somehow, and is being cared for at Wasson Memorial Veternary Clinic in Lakeport. The cat's eyes appear to have been almost burned shut, however vets say he's regaining his eyesight. He's being tube-fed and will probably make it, they say.

Lake County Animal Care and Control officials are continuing to try to reunite lost pets with their owners, and many of the injured pets were sent to UC Davis Animal Hospital.

Previously: More About The Only Fatality In The Valley Fire As It Grows To 67,000 Acres
Harbin Hot Springs Vows To Rebuild

Evacuees camp at the Red Cross evacuation center in Calistoga for those displaced from their homes by the Valley Fire. (Photo by David McNew/Getty Images)

When a drone carrying a camera in the sky high above the playa crash-landed — like a space probe on a new, dusty planet — the locals welcomed their newcomer as a new totem or

Palo Alto-based Hewlett-Packard is shutting down 30,000 jobs. [Associated Press] This is how easy it is for someone to scam you on SF-based payment platform Venmo. [Slate] "Desperate" Uber appeals class action